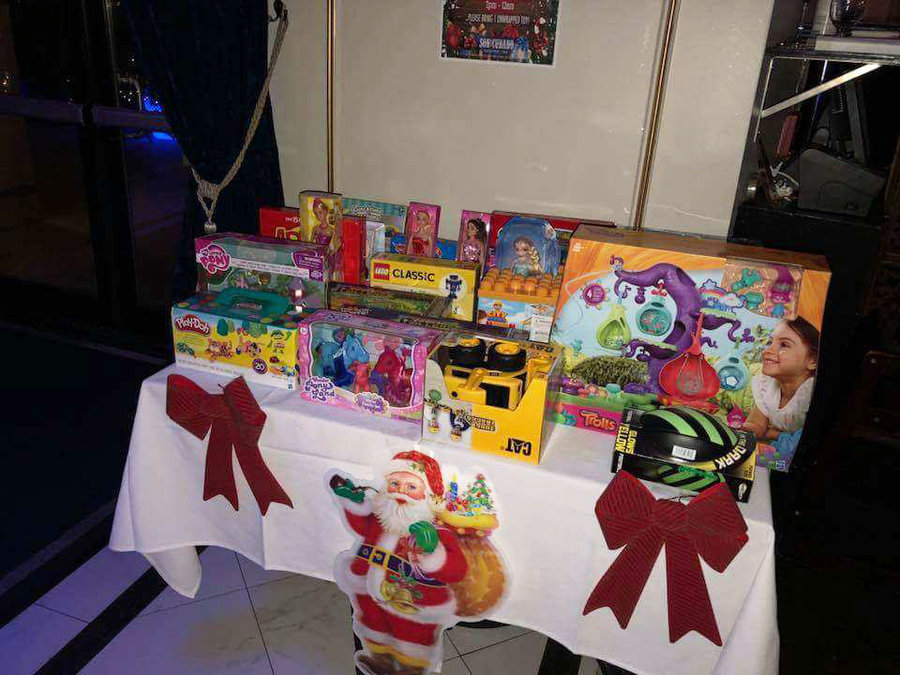 People came from far and wide to contribute to an annual toy drive that took place in West New York and was dually sponsored by the Mason Civic League in Hoboken and the Fernando Urbie Foundation in Union City. Perhaps they also came to get a glimpse of the amazing suit.
Dressed in a red checkered suit that is nearly as colorful at he is, Urbie greeted incoming guests on Dec. 6 at Son Cubano in West New York.
The two groups host this event every year and will distribute the toys at the Mason Civic headquarters in Hoboken on Dec. 21
“This is a wonderful event,” Mason said. “It is our seventh annual holiday toy drive. It helps children in the community have a better and more enjoyable holiday season.”
She said on behalf of Mason Civic League, she wanted to thank all of the donors filling bar area.
“We’d also like to thank Fernando Urbie for all his hard work coordinating the event,” Mason said. “Son Cubano has graciously hosted this event two years in a row. The staff goes beyond and really adds a special touch for all the attendees. It is a great start to the holiday season.”
The Mason Civic League and the FUF are registered 501c3 tax exempt public charities. MCL has a mission of raising awareness, providing outreach, socks, and toiletries to veterans and civilians experiencing homelessness throughout the state of New Jersey, Hudson County, and greater New York area. FUF has dedicated itself to raising awareness about students going to college and helping them with potential scholarships to combat the rising cost of higher education in the United States. Urbie’s foundation has won awards from the March of Dimes for eight years and the American Cancer Society for six years in supporting various fundraising walks.

Urbie, who is a professor at Hudson County Community College in Jersey City, said he is an advocate for a number of causes, and hopes to broaden the scope of his organization.
“Next year we hope to provide scholarships,” he said.
Some of the people who came to donate know him from school. Others know him from his podcasts.
He said he teamed up with Mason League as a way to give back to the community, and this no doubt has brought in people from Hoboken and elsewhere as well.
Mason is a former councilwoman in Hoboken. Her Civic League headquarters on Washington Street also displays art.

Brian Kolendriski, a former probation officer with the New Jersey judiciary, made his way up to the event from Central Jersey.
“I used to live in Jersey City,” he said. “This is a wonderful thing Fernando is doing.”
Son Cubano helped the cause by offering discounts to anyone who gave a gift and for about five hours, people mingled in the luxurious setting.
“We try to raise awareness for different causes,” Urbie said. “Last year we collected more than 200 toys for kids.”
This year it appeared early that the effort would collect even more as guests from every walk of life walked in carrying gifts to give him.
“I love doing this,” he said. “People come from all over Hudson County. Some even come from Manhattan and other places in New Jersey.”

Policing in a pandemic