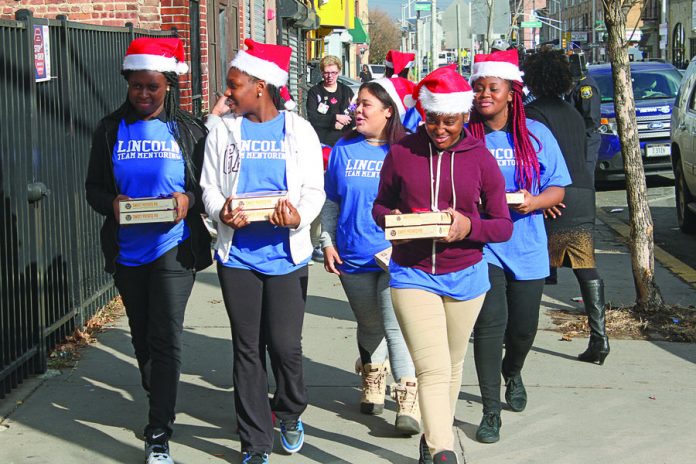 People along Ocean Avenue, including a group of firefighters washing down their rig, paused to see a host of blue-shirted students appear on the street in front of Ocean Point East Senior Center on Dec. 19.
Each student carried a sweet potato pie, in what could become a holiday tradition.
For Ocean Avenue on a weekday, where most people are simply hurrying to get to work or to local stores, the parade of students filled the neighborhood with holiday cheer, and perhaps a message about how old and young can come together in a spirit of joy.
The students from Lincoln High School joined members of Mt. Olive Baptist Church, CarePoint Health, and numerous local, county and state elected officials, as well as a range of community organizations, to donate more than 1,000 sweet potato pies and sugar free cookies to senior citizens
“We wanted to show seniors a lot of love,” said Joanne, one of the students who turned out for the event.
Pastor John H. McReynolds has been with Mt. Olive for 31 years. He came up with the idea to connect generations young and old in this way. McReynolds wanted to let the seniors know they are cared for during the holiday season.
The church has been deeply involved in a number of community programs and recently teamed up with several local banks to help area residents obtain bank accounts.
Volunteers from the church and other organizations joined the students who are part of the teen mentoring program, members of local law enforcement, and other service organizations to deliver pies to over 20 senior’s buildings.
Diasha, another student, said she and others wanted to care for the seniors who have spent their lives caring for them.
“This is a way for us to pay them back and show them a little love,” she said
In the kick off of the event, Mayor Steven Fulop, Hudson County Executive Tom DeGise, state Sen. Sandra Cunningham and Jersey City Council President Rolando Lavarro helped celebrate as the kids and mentors led a cheer for local leaders and police who have been very involved in the community. This included an impromptu cheer for the surprised firefighters across the street, as well as a host of pedestrians making their way up the block.
Singled out for his contributions to the neighborhood, police Capt. Nicola Flora seemed a little embarrassed, though it was clear from the faces of the students and others, he played a vital role in helping the neighborhood.
“Captain Flora really rocks Jersey City for our kids,” said Tamika McReynolds, the wife of Pastor McReynolds, who served as MC for the event and led the cheer.
Monique Smith of the MoHair Foundation said many of the seniors are lonely and appreciate visits such as this. MoHair Foundation is known for a number of its programs, including providing Thanksgiving meals to the needy.
Mary Freeman, a lifelong resident of Jersey City, said she was surprised by the gift, although she said it would probably “play havoc” with her sugar levels.
Seated at one of the tables in the senior buildings, William San Diago also said he was surprised and pleased by the visit and the pie. He and several of his friends at the center all grinned over the gift.
DeGise told the seniors and the volunteers that 2017 hasn’t been a particularly good year overall.
“I’m hoping 2018 will be better,” he said, noting that this was a good tribute to the seniors.
Tamika McReynolds told the seniors, “This is our way of telling you that we love you, and we can’t do without you.”
Cunningham agreed the seniors were a blessing, and quoted her deceased husband, former Jersey City Mayor Glenn Cunningham.
“You are our history and keep us connected with the past,” she said, noting that it was important for young to connect with the old. She paid tribute to the mentoring students. “You make a positive change in our community.”
Several officials from CarePoint, as well as members of the Jersey City Police Department, Jersey City Department of Recreation, and others took part in the event.
“We want to thank seniors not only in Jersey City but in Bayonne, too,” said Tamika McReynolds, before the students embarked for what was a day long road trip of southern Jersey City and Bayonne.
CarePoint Health, which has hospitals in Bayonne and Jersey City as well as Hoboken, helped sponsor the event.