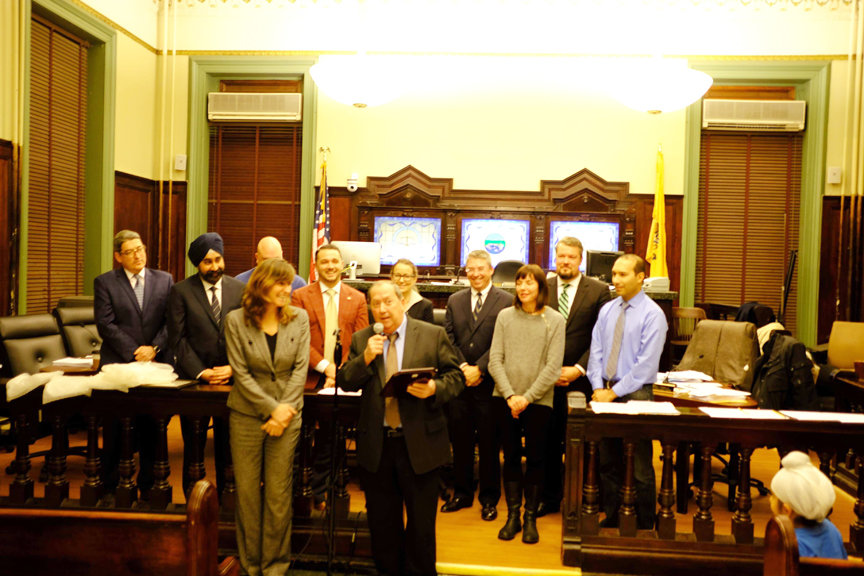 The Hoboken Housing Authority approved, at their Nov. 9 meeting, a potential $700,000 payment to settle litigation with Carmelo Garcia, its former executive director, according to the meeting transcripts.
The measure passed 4-0-2 with Commissioner Barbara Reyes and Commissioner LaTrenda Ross abstaining.
However, the settlement must still be approved by the federal Department of Housing and Urban Development.
The HHA, funded by federal tax dollars, oversees the city’s low-income housing projects. It’s run by a paid executive director and staff, but overseen by an unpaid seven-member board of local appointees. Often, the majority is allied with the current mayoral administration.
In 2014, the majority of the seven-member HHA Board of Commissioners terminated Garcia, citing various alleged management and financial issues. He filed a lawsuit in 2016 saying the firing was discriminatory and part of a pattern in which the administration of Mayor Dawn Zimmer was keeping minorities off boards. Due to the filing, various emails came to light in which at least one board member and the mayor’s husband were emailing each other about Garcia’s employment situation.
Garcia claimed that Zimmer, her husband Stan Grossbard, and members of the Hoboken Housing Authority (HHA) conspired to have him removed from his position because he did not support the mayor’s agenda.
The HHA also countersued Garcia that year, alleging that he violated HUD guidelines in the approval of several contracts.
Garcia’s attorney, Louis Zayas, said on Friday, “Mr. Garcia and his family are happy and humbled to put this behind them as an amicable and favorable resolution has been reached.”
When asked for a comment on the matter on Friday, current HHA Executive Director Marc Recko said he was “unaware of any such resolution” for a settlement.
Former chairwoman of the Board of Commissioners Dana Wefer, who left the board this year because she moved to Bergen County, said she was not notified of any settlement agreement. Wefer was the chair at the time that Garcia was terminated.
At the December HHA meeting, board member and Councilman David Mello declined to comment when asked if there was an update.
While Garcia served as director, he was also elected to the state Assembly and served in that part-time job concurrently.
To read more details about this issue, see past stories at hudsonreporter.com. Watch for more on this story in January.

Awards and goodbyes at council meeting

The City Council and Mayor Dawn Zimmer, whose last day in office is Dec. 31, handed out several awards during Wednesday night’s council meeting to city employees and elected officials for their service to the city. (Councilman Ravi Bhalla, whom she endorsed, will be inaugurated as mayor Jan. 1.)
The council recognized Zimmer, Bhalla, and outgoing Councilman David Mello for their service to the city.
Zimmer also recognized Mello as well as The Hoboken Police Department, Chief Ken Ferrante, The Hoboken Fire Department and Chief Brian Crimmins, The Hoboken Volunteer Ambulance Corps. led by Tommy Molta, Administrator of Cultural Affairs Geri Fallo, and Health Department Officer Frank Sasso for their service to the city and its residents presenting them each with plaques.
During the council meeting, Mello thanked his fellow council members, his family, and friends for their support and help during his eight years on the council.
He said his commitment to public service is what fueled his desire to play a leadership role in the city and that he was proud to have served and of the work he accomplished, including the construction of the Southwest Resiliency Park. He urged his council colleges to continue to expand the Southwest Park as well as move Paterson Plank Road. He said he would be back on the other side of the dais, to speak at future council meetings.

In the Dec. 17 cover story “Over a million $$ on mayoral campaigns,” the Reporter reiterated Councilwoman Tiffanie Fisher’s filed complaint with the city clerk’s office over alleged contribution violations made by the DeFusco campaign. The story stated that DeFusco received money from the NRCC National Republican Congressional Committee. It was actually the Northeast Regional Coalition of Carpenters.

During Hour of Code — an annual event encouraging kids to write computer code, held during National Computer Science Education Week from Dec. 4 through Dec. 10 — students in Hoboken Charter School’s “Girls Who Code” club learned how to create, invite, collaborate, and code using littleBits Code Kits.
The middle school girls helped elementary students learn how to put together a circuit and code it to create a holiday themed hot potato game.
“The older girls get a chance to teach the younger girls about coding and they are excited to share what they have learned,” said Christopher Kunkel, STEAM (Science, Technology, Engineering, Arts, and Math) educator at the school. “We had about 50 girls in attendance for the afternoon and used the littleBits Code Kits to help engage the younger students.”

Learn how to become a CASA (Court Appointed Special Advocate) volunteer and help foster children find safe and permanent homes. The next information session will be held at the Hudson County Courthouse, 595 Newark Ave. Rm. 901 on Tuesday, Jan. 9 at 6:30 p.m.
Hudson County Court Appointed Special Advocates (CASA) is a non-profit organization committed to advocating for the best interests of abused and neglected children. CASA works through trained community volunteers to ensure that needed services and assistance are made available to children while helping to move them toward safe and permanent homes. Hudson County CASA volunteers are everyday people who make a direct impact in foster children’s lives. They are trusted, dedicated adults who seek to improve children’s well-being. CASA volunteers get to know their assigned child and his or her circumstances and provide valuable information to the court. Judges rely on the volunteers’ recommendations to make the best decisions about the children’s futures.
For further information, visit www.hudsoncountycasa.org.