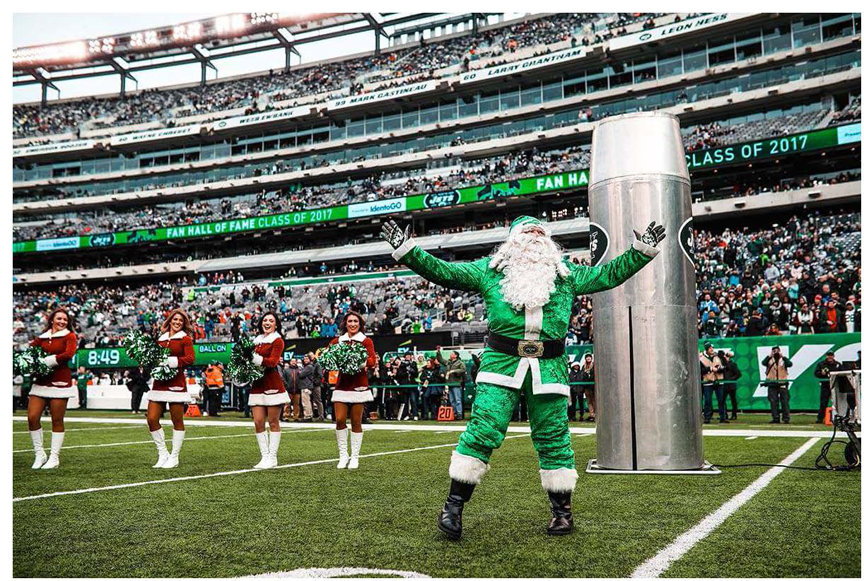 Frank West, a Bayonne resident, Kearny police detective, and Jets superfan, won entry into the NY Jets Fan Hall of Fame at a Christmas Eve home game against the Los Angeles Chargers, along with four other fans.
West was welcomed to the stadium with a locker in the team room and a custom jersey bearing his name and the number ‘17 for the year he was inducted. He also received two plane tickets to fly anywhere he wants, plenty of Jets merchandise, a custom Jets varsity jacket, and four passes to pregame warmups. All inductees were announced in the Jets team introduction tunnel, which West emerged from wearing a green Santa suit that has become familiar to Jets fans.
After West’s introduction, NY Jets photographers posted images of him storming the field on Instagram, with a caption that reads, “How does Santa hit every house on Christmas Eve? He runs a 4.45 40-yard dash.” He, his partner, and his parents watched the game from exclusive seats at MetLife Stadium’s EY Coaches Club, which is between the two team locker rooms and provides exclusive field-level access to the 50-yard line.
“My initial reaction was I don’t know, I’m still not a hundred percent sure I didn’t sleep through my alarm this morning because it feels like I’m dreaming,” said West, who recorded a video on social media to thank his friends and the Jets fanbase. “I’m not going to lie, I was getting a bit teary eyed when I said it is moving.”
“We at the New York Jets recognize how important our fanbase is to this organization, and we are proud to show our appreciation for them through the Jets Fan Hall of Fame,” said New York Jets President Neil Glat in a press release. “The Jets Fan Hall of Fame is designed to celebrate the ultimate Jets fans, and we look forward to continuing it for years to come.”

The 2nd Annual Feast of the Seven Fishes was held in Bayonne on December 23 at the Blessed Miriam Theresa Church/ Bayonne Soup Kitchen.
As with the traditional Italian-American celebration, guests enjoyed a variety of seafood dishes as well as steak for those with seafood allergies. More than 100 gifts were handed out in addition to cold-weather gear and gift bags filled with supplies.
The event was sponsored by Preferred Freezers of Jersey City, the Bayonne Elks, and Bayonne Rotary Club. Other sponsors included Judickie’s, Paulanto’s, Antonio & Vincent’s, Little Food Cafe, Bergen Point Produce, and Senerchia’s. Donations were also provided by Melissa Rada, Maria Valado, Mary Beales, and Michelle Halsey.
“All in all, guests left with their hands and stomachs full with big smiles on their faces,” said Peter Franco, who organized the event. “There’s an old saying that it takes a village, and I’m so grateful and honored to have served with you all.”

Fire departments from Hoboken, Jersey City, Bayonne, and New York battled a yacht fire for about two hours in freezing temperatures on Thursday, December 28, at Liberty Harbor Marina in downtown Jersey City. Two 60-foot yachts were engulfed in flames and required assistance from three NY Fire Department boats.
The fire started at the Dudley Street marina at about 9 p.m. and was determined to be under control at 10:53 p.m., according the Hoboken Fire Department. The HFD also said that one civilian was treated by EMS.

A 63-year-old Bayonne man died about two weeks after being involved in a crash on Route 440 last month, according to the New Jersey State Police.
The victim, whose name will not be released until police confirm his identity, was critically injured when an 18-year-old driver crossed the median near Suburbia Court on Dec. 4 and crashed into the man’s vehicle.
The 63-year-old man told police that he noticed the oncoming driver traveling south lose control of her car and tried his best to avoid the crash, hitting a guardrail before the teenager’s car hit his. Firefighters removed the 63-year-old from his vehicle.
Both drivers were brought to Jersey City Medical Center for injuries initially considered not life-threatening. The 63-year-old died about two weeks later.

The state sales tax has dropped to just over 6.6 percent and the estate tax has been eliminated, now that 2018 is here. The minimum wage has been raised 16 cents to $8.60 an hour. And, in an effort to cut down the length of lines at the Motor Vehicle Commission offices, drivers’ licenses and state ID cards will expire every four years on the holder’s birthday instead of at the end of the month. The drivers’ license change should take effect by February.

Immediately after being sworn in on Monday, Hoboken’s new mayor, Ravi Bhalla, signed his first executive order, declaring the municipality a “fair and welcoming city.” Under the order, police and other officials will not use city resources to enforce federal immigration laws except when they are legally required to do so. Bhalla, who was the subject of racist fliers in the mayoral campaign, is the first Sikh to be elected mayor in New Jersey.

The federal program that has housed in hotels and motels nearly 4,000 families who were displaced from their homes in Puerto Rico by Hurricane Maria is ending this month, according to The Record. New Jersey hotels have been the temporary home to 72 of the displaced families in the Federal Emergency Management Agency’s Transitional Shelter Assistance Program, which ends Jan. 13. Puerto Rico’s governor, Ricardo Rosselló, has asked federal authorities for an extension.