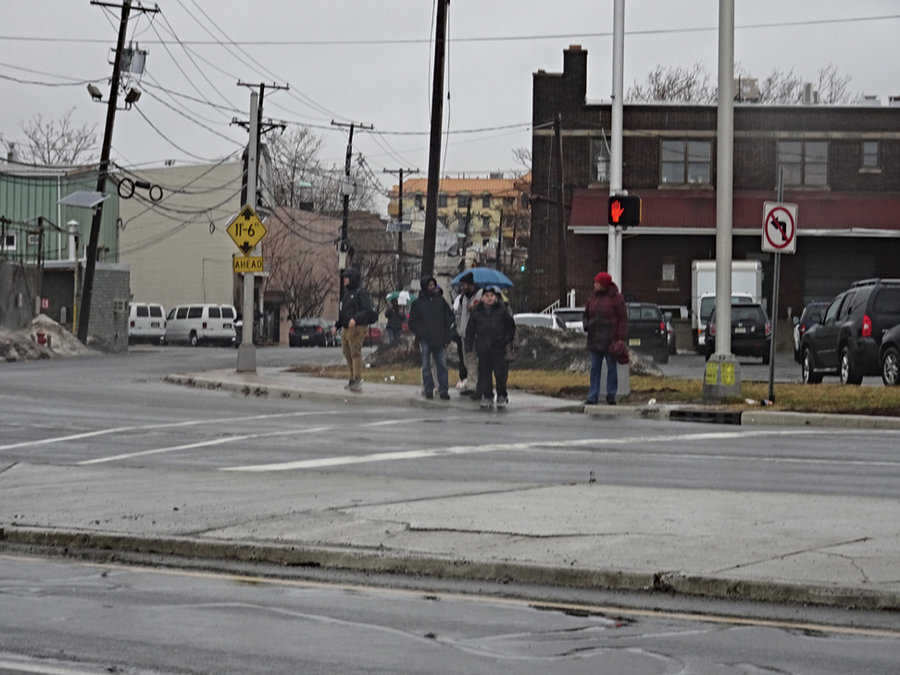 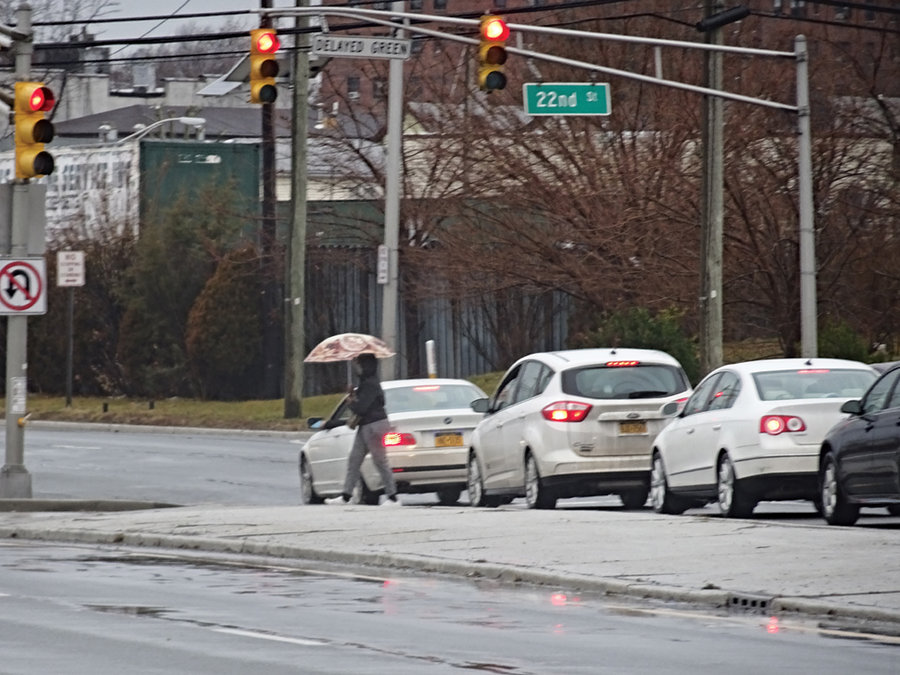 Pedestrians in Bayonne know the problem roads: Kennedy Boulevard and Route 440. Multiple people have died in the last few years trying to cross the two widest roads in Bayonne. In November 2016, two men were killed on Route 440 by a motorist driving more than 100 miles per hour. Design solutions are required for both roads; police have pledged to strictly enforce speed restrictions on JFK.
On Route 440, motorists aren’t the only problem. The road was never designed for pedestrians to cross, which is a growing problem now that a new QuickChek and Burger King are open on the corner of 22nd Street and Route 440, attracting pedestrians from adjacent neighborhoods. Meanwhile, construction projects being completed on the Bayonne Bridge and the 14A Interchange could mean increased traffic on Route 440.
The good news is that the 22nd Street crosswalk was recently redesigned with all these factors in mind. A new signal was installed to provide enough time for pedestrians to safely cross, and a vehicle off-ramp was removed. The center median, however, remains a major design problem, tempting people into a game of real-world Frogger.

Before the new signals were installed, pedestrians often found themselves stranded in the wide center median while traffic whizzed by in both directions. Instead of waiting for an opening in traffic, pedestrians would walk for hundreds of feet on the median toward the shopping center until the road cleared enough to dart across. Now, the signals on the crosswalk leave enough time to cross safely, and the median has cutouts for wheelchair access. There is also a signal button on the median for pedestrians to stop traffic.
These improvements are courtesy of the Alessi Organization, developer for the Bayonne Crossing Shopping Center and South Cove. Recognizing the dangerous design of the former crosswalk, the organization stepped up to the plate by including the crosswalk redesign in its redevelopment plan.
The bad news is that pedestrians are still attracted to the mid-highway sidewalk. Ryan Singer, who commutes by foot to the Bayonne Crossings Shopping Center, is one of those pedestrians. Instead of waiting for the traffic lights to turn red, he walks along the grass shoulder on the east side of Route 440 for about 50 feet until the three lanes separating him from the center median are free of vehicles. He then darts across and continues north on the median until the remaining two northbound lanes are free of traffic. He then races across to the shopping center.
It seems like a lot of trouble to go through when a perfectly safe crosswalk was just built. Why not cross there?
“It’s takes time,” Singer said. “You have to wait for the signal.” He acknowledged that the signals had improved, but it still saves him time to use the median as a sidewalk. Though he sees improvements to the crosswalk as positive, he said, “The whole area needs to increase safety overall. They have to make it easier to cross Route 440 to increase the popularity of this mall.”
Barbara Spalto, who was walking to the mall to do some shopping on her day off, said that she, too, noticed the crosswalk improvements, saying it made crossing “a little easier.” Before, she said, you had less time to cross on the crosswalk. “They talked about making a pedestrian walkway somewhere,” Spalto said. “That would be better.”
Though the improved crosswalk is not perfect, it seems to be the best alternative to a full-blown pedestrian overpass, which would cost upward of $5 million, according to Suzanne Mack, City Planner for the City of Bayonne.
“I would not know how to fund that,” said Mack, who has been adamant about the importance of pedestrian safety.

Only one pedestrian overpass

There is no doubt that a pedestrian overpass would reduce almost to zero the chance of motor-vehicle fatalities. But for now, there’s only room in town for one pedestrian overpass, and city planners are considering one for 34th Street that will take pedestrians over Route 440 to Goldsborough Drive, near South Cove Commons and the site of a future Costco. The project would extend from the walkway that already takes pedestrians over the light rail tracks.
Bayonne recently received a grant from the NJ Transportation Planning Authority for a concept development study, for which the city will soon begin accepting bids, according to John Pavlovich, Traffic Engineer for the City of Bayonne.
The 34th Street overpass will unfortunately be too inconvenient for many residents crossing at 22nd Street. From there, a pedestrian would have to walk a two-mile circuit to get to QuickChek, instead of walking a few hundred feet.
But Barbara Spaltro is game. “I might use it,” she said. “I like walking.”