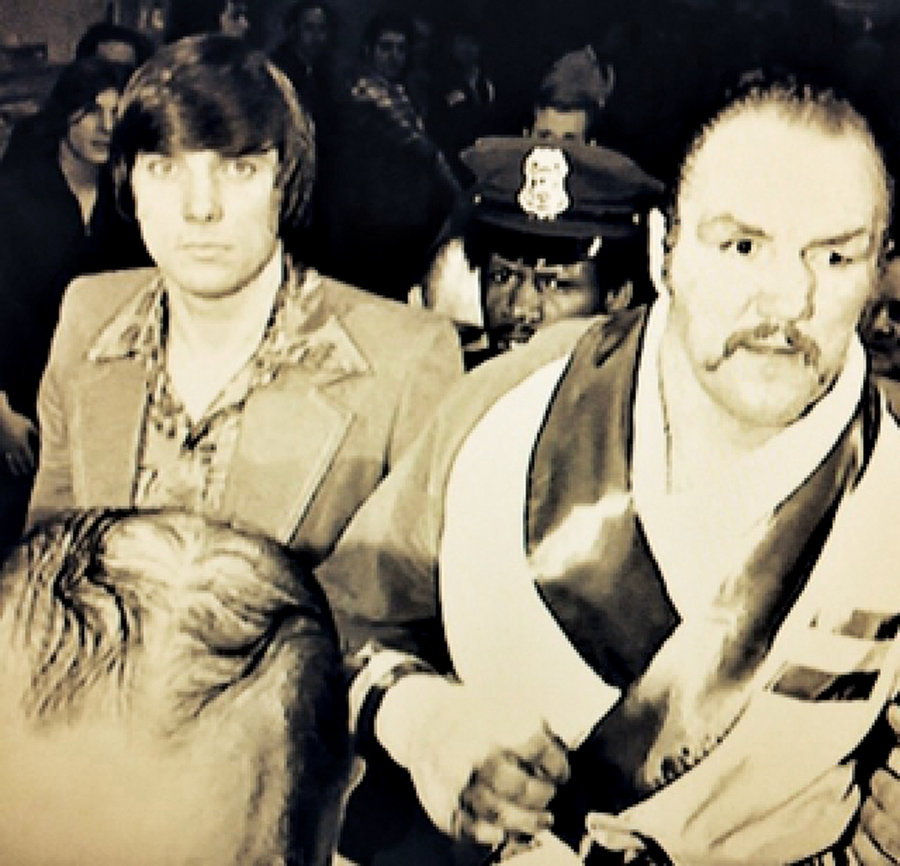 In a letter issued at the conclusion of World War II, President Harry S Truman paid tribute to the memory of Private Michael A. Mastrandrea, who died in the service of his country.
“He stands in the unbroken line of patriots who have dared to die that freedom might live, and grow and increase its blessings,” Truman wrote. “Freedom lives, and through it, he lives in a way that humbles the undertakings of most men.”
Mastrandrea, who was born in Jersey City and later relocated to New York, was a member of a U.S. Army airborne unit and died during the invasion of Normandy in 1944.
Now more than 70 years later, he was honored as well for his short, but outstanding career as a boxer when he, Sal Alessi of Bayonne and Jersey City, and Bob Rooney of Bayonne were inducted into New Jersey Boxing Hall of Fame this fall.
The organization’s 40th Annual Dinner and Induction Ceremonies took place at the Venetian catering hall in Garfield. Fourteen of the state’s best fighters were inducted.
The Bayonne Bleeder, Chuck Wepner was also honored as Man of the Year.

Big influence on other people

Born in Jersey City, Alessi’s boxing career began at the Bayonne Police Athletic League in 1981. He started his professional career in 1984. He sparred with a number of fighters when Bobby Rooney Senior convinced him to train other fighters. He went on to manage, train, and promote dozens of New Jersey’s finest boxers, including Bob Rooney Jr., Jeremy Bryan, Glen Tapia, Pat Farrell, Wayne Johnson, and others.
He started the Hudson County Boxing Club in Jersey City with trainer Mike Skowronski.
Rooney, Sr. served in the United States Marine Corps from 1963 to 1967, including a tour of duty in Vietnam in 1965 to 1966. He received a Purple Heart in 1965. After his discharge, he started his career in boxing. He reached the quarter finals in the New York Golden Glove competition in 1970. He started as a volunteer at the Bayonne PAL in 1970 and took over as head coach in 1984, running the program for more than 30 years He trained 23 Golden Glove champions, 18 Diamond Glove champions and five Amateur Club Champions.
He also trained state team champions in 1988, 1990, 1991, 1992 and 1996. He trained Nino Gonzalez to a state title and a fight with Roberto Duran. He was also Wepner’s sparring partner for 13 years.
Wepner, who was a New Jersey State Heavyweight Boxing champion, was the seventh-ranked heavyweight fighter in the world before getting the chance to fight Muhammad Ali in 1975 for the title in a bout that was the inspiration for the “Rocky’’ films.
Wepner learned to fight on the streets of Bayonne. He was quoted in the ceremony agenda as saying, “This was a tough town, with a lot of people from the docks and the naval base, and you had to fight to survive.”
In the U.S. Marines, he became a member of the boxing team where he developed a reputation for being able to withstand other boxers’ punches, and successfully become champion on one of the naval bases. In 1964, he won the New York Golden Gloves Novice Championship and later became a popular boxer on the Northeast’s Club Boxing circuit that included arenas in North Bergen and Secaucus.
As a professional he won a lot of fights, but lost to champions like George Foreman, and Sonny Liston. In 1975, he challenged Muhammad Ali for the world heavyweight title and took Ali into the 15th round in a fight that later inspired the film, “Rocky.” Wepner was never knocked down in his entire career.

Mastandrea fought for less than 19 months, in which he had 36 fights. Five times during his career he fought three times in a single month. From Oct. 3 to Dec. 18, 1942, he fought nine times.
“My uncle started out using the name Mickey Rea not wanting my grandparents to know he was fighting,” said Michael Mastandrea. “My grandfather was so mad he made him sleep in the hallway outside their apartment. My grandfather eventually accepted it and attended a few of his fights. I have four aunts, an uncle, and my dad still alive, his brothers and sisters. The family did not speak much of Mike while I was growing up, too hurtful. I started researching just a few years ago when my aunt showed me a scrapbook full of photos and news articles. My mom told me my grandfather asked she name me Michael after him.”
Although he moved to Brooklyn at age five, many of his family members remained in Jersey City.
Mastrandea entered the New York Gold Gloves competition in 1941 at age 18, but decided to go professional before getting to the finals.
Born in Jersey City in 1922, Mike Mastrandea/Mickey Rea lived in Brooklyn when he debuted on May 23, 1941 and was awarded a victory over Julie Bort.
Local press called him one of New York’s “ring rages.” Another story teased him for being an Italian fighting under a very Irish name, while another account called him “young, strong and determined.”
“The Gotham youngster can hit,” one news account said. “He is a slam-bang fighter who makes every punch count.”
Mastrandrea returned to Jersey City several times during his career to fight.
Although he won most of his bouts, his perhaps most significant loss came on June 6, 1942 when he was knocked out by legendary boxer, Rocky Graziano, who had high praise for him.
In his book, “Somebody Up There Likes Me,” Graziano talked about a tough kid named Mike Mastandrea who “boxed and punched” him dizzy, and gave him a split lip before Graziano stopped him late in the third round.
This was his last professional fight before he was drafted into the U.S. Army.
“He wanted to be a paratrooper because it paid an extra $50 per month he could send home. My grandmother lived to 100, passing in 1996, and she got that $50 check every month till the day she passed,” his nephew Michael said.
But during service, he continued to box. He became senior welterweight champ while stationed at Camp Robinson, winning the regiment boxing title several times, often facing serious challengers who went onto professional careers themselves. Mastandrea continued to box when his unit got to England.
On June 6, 1944, he and his fellow soldiers boarded a flight to invade Normandy. The C-47 they flew in was struck by enemy fire. There were only three survivors. He was only 21 when he died.