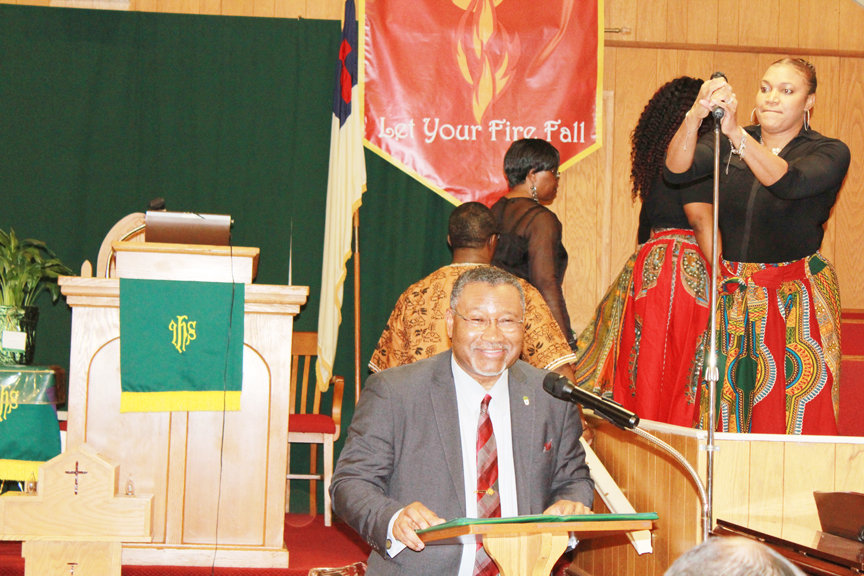 The ambassador of Guyana to the United Nations, Michael R. Ten-Pow, spoke at the Wallace Temple AME Zion Church Caribbean Ministry’s 7th anniversary celebration on Jan. 28. The celebration included gospel music, dancing, scripture reading, and discussion. The event also celebrated the church’s Moving for Missions outreach ministry, which recently rebuilt a water well in the remote Moblissa Village on the Linden Soesdyke Highway in Guyana.
The purpose of the Moving for Mission ministry is to help provide clean water, food, shelter, clothing, and education to communities in Guayana.
Reverend Dorothy A. Patterson said the mission started after she attended a conference in Guayana a decade ago on the subject. Since then, she has partnered with the Global Ministry, and received donations from the New Jersey Rotary Club to refurbish the water well, which now serves hundreds of citizens daily in the Moblissa community of Guayana.

Gov. Phil Murphy signed an executive order on Monday requiring internet service providers who do business with the state to follow net neutrality standards. In December, the Federal Communications Commission dropped the standards that require equal treatment for all internet providers, allowing charges for faster internet service. Murphy also said NJ was joining 21 other states in a lawsuit intended to force the FCC to reinstate net neutrality.
31st District Assemblyman Nicholas Chiaravalloti, who introduced bills last year calling for NJ to adhere to net neutrality standards, praised Murphy’s executive order. “Governor Murphy has showed true leadership in taking on this important issue,” said Chiaravalloti. “It is important that we stand behind and support the public’s interest rather than the interests of the large corporate internet service providers.”

Teenager arrested for handgun possession after being injured in a fight

A local teenager was arrested for handgun possession after police broke up a fight on Avenue C and 21st Street, according to the Bayonne Police Department. When police arrived, they noticed the 18-year-old, who lives in the neighborhood, crossing the street and bleeding from his face and tried speaking with him. The teenager declined to speak, and later knelt behind a car when police heard a distinct sound of metal hitting the pavement. Police then found a gun on the pavement where the teenager was kneeling. The teenager was arrested and charged with unlawful possession of a handgun, according to police.

A 19-year-old from Jersey City was arrested last week in connection with three robberies in the area of 18th Street in Bayonne, according to the Bayonne Police Department. The teenager posed as someone looking to sell his phone on Facebook marketplace, luring victims to meet in the area of 18th Street. Promising to exchange a smartphone for hundreds of dollars, he would provide either a broken phone or a different model phone than he advertised.

Confirmed cases of flu have continued to rise in New Jersey, News 12 reports. On Sunday, Feb. 4, about 60 samples were tested for influenza at Hackensack University Medical Center and about half were positive for influenza. The state Health Department says that the outbreak is widespread in all of New Jersey’s 21 counties. The Branchburg School District in Somerset County closed on Feb. 5 due to flu outbreak, leaving 2,400 students home.

Library patrons seeking books and other materials they can’t find at their local libraries have run into a backlog that exceeds 86,000 volumes in Bergen, Essex, Hudson, and Passaic counties and even more statewide, according to The Record. The state-funded nonprofit LibraryLinkNJ, which handles interlibrary loans, brought on a new delivery contractor at the beginning of the year and now describes the situation as “catastrophic.”

Menendez will not face retrial in bribery case

The Justice Department said last week that it would not retry Sen. Bob Menendez on bribery and fraud charges. A federal judge then dismissed the case. Last year a jury was unable to reach a verdict and a mistrial was declared in the case against Menendez and co-defendant Salomon Melgen. The decision removes a challenge that Menendez, a Democrat, was facing as he runs for re-election this year.
The Justice Department refiled the charges earlier this month, but U.S. District Judge William Walls, who heard the original case, dismissed seven of the most serious charges against Menendez and Melgen. Walls said the trial had shown no evidence of wrongdoing in regard to Menendez accepting campaign contributions from Melgen.
This left the lesser charges of Menendez accepting gifts and trips from Melgen. Menendez’s defense team was expected to request that the other charges also be dropped.
But it appears the Justice Department decided the case was not worth pursuing and dropped the remaining charges against both men.
“From the very beginning, I never wavered in my innocence and my belief that justice would prevail,” Menendez said in response to the decision. “I am grateful that the Department of Justice has taken the time to reevaluate its case and come to the appropriate conclusion. I thank God for hearing my prayers and for giving me strength during this difficult time. I have devoted my life to serving the people of New Jersey, and am forever thankful for all who have stood by me. No matter the challenges ahead, I will never stop fighting for New Jersey and the values we share.”
The case could have had serious political implications. Republicans hold a narrow majority in the U.S. Senate and Menendez faces reelection this fall.
The two men were charged in a case that claimed Melgen had given Menendez significant campaign contributions as well as gifts and trips in exchange for helping in solving problems Melgen was having with several agencies of the federal government. Menendez has said he was merely helping a constituent.
A number of local officials had urged the federal government to drop the case, from Rep. Albio Sires to Hudson County Executive Tom DeGise.

Suntex Marinas announced that in the spirit of cooperation, it has agreed to a request from New Jersey Department of Environmental Protection officials to postpone the public presentation of details surrounding its proposed marina in Liberty State Park.
The presentation had been scheduled for Tuesday, Jan. 30 at a restaurant at the park’s northern end. An alternate date will be announced once it has been confirmed.
Suntex has proposed construction of a marina at the southern portion of the park. In addition to much-needed space for area boaters, the marina will include a waterfront restaurant, a boat club that will allow members to use available boats for a nominal fee, and City Sail, a sailing school that caters to teens.
Along with the marina, Suntex plans to refurbish the dilapidated public boat launch as well as construct a public fishing pier at the park’s south side. Suntex also will update the popular picnic area at the south end, which over the years has fallen into some disrepair.
As part of the agreement with the DEP, Suntex has agreed to maintain and repair the bulkhead at the park’s northern end, where Suntex operates the Liberty Landing marina. The state had formerly been responsible for the bulkhead.

Sires explains his boycott of State of the Union

Rep. Albio Sires (D-8th Dist) said he did not attend President Donald Trump’s State of the Union because he felt the president was dividing the nation with “vitriol and fear-mongering” while governing for a select group at the expense of many others.
“Unfortunately, the president’s speech was more of the same misguided rhetoric and vague proposals. He touted the rushed Republican tax bill which prioritizes the wealthy and corporations over those who need tax relief the most,” Sires said. “While tax breaks for corporations were made permanent, relief for individuals is only temporary and once they sunset people will see their tax bills increase. Even with the new tax cuts, a number of companies have turned around and begun to lay off workers.”
The president’s attempt at bipartisanship with a call for a $1.5 trillion investment rings hollow, Sires continued.
“It does not reconcile with the fact that his administration has so far committed to no more than $200 billion in assistance from the federal government, leaving the states to find ways to raise the other $1.3 trillion,” Sires said. “President Trump should match his rhetoric with reality, and he can start by coming out in support of federal financial assistance for important national and regional infrastructure projects such as the Gateway Project. Perhaps most disturbing was how the president continued to divide the nation, conflating students and industrious young people, who were brought here not of their own volition, with criminals who have committed horrendous acts. By choosing to see the worst in our nation’s immigrant community, President Trump has turned his back on what America has stood for since it was founded – a place where hard-working people could come and build a life for themselves and their families.”
“If the president was truly committed to bipartisanship and unity he would not use Dreamers as a bargaining chip or waver on his promise to help them as we approach his arbitrary deadline of March 5,” Sires said. “While I am disappointed in the message of last night, it is my hope that the president does not continue to divide our nation but instead chooses to govern for all those who call the United States of America home.”

Christine Todd Whitman, a Republican who was the first female governor of New Jersey, will co-chair the National Task Force on Rule of Law and Democracy, according to NJ Spotlight. The nonpartisan task force, spearheaded by the Brennan Center for Justice at New York University School of Law, will also be co-chaired by Preet Bharara, the former U.S. Attorney who was fired last year by the Trump administration.
Like Christine Todd Whitman in the 1990s, women in NJ politics today are growing more active.
The Wall Street Journal writes that women are carving out a bigger place for themselves in NJ by seeking leadership positions in the Democratic and Republican parties. Among the women seeking more of a voice is Colleen Mahr, who is running for chair of the Union County Democratic Committee. In both parties, the committee chair wields significant power in determining who runs for public office. Of the 42 county chair positions in the state, only seven are held by women.

Actress Meryl Streep, musician Stevie Van Zandt, and author Harlan Coben are among the 16 inductees to the New Jersey Hall of Fame, according to the Asbury Park Press. Gov. Phil Murphy made the announcement on Jan. 39, saying the inductees “remind us how so many of our citizens have transformed the world.” An induction ceremony will be held on May 6.

A measure aimed at further reducing the rate of smoking in New Jersey won approval by the Assembly health committee Monday, according to NJ Spotlight. The proposal would ban combustible products containing menthol, including cigarettes like Kool and Newport. If the measure becomes law, New Jersey – which has one of the toughest anti-smoking laws in the nation – would become the first state to ban menthol cigarettes.