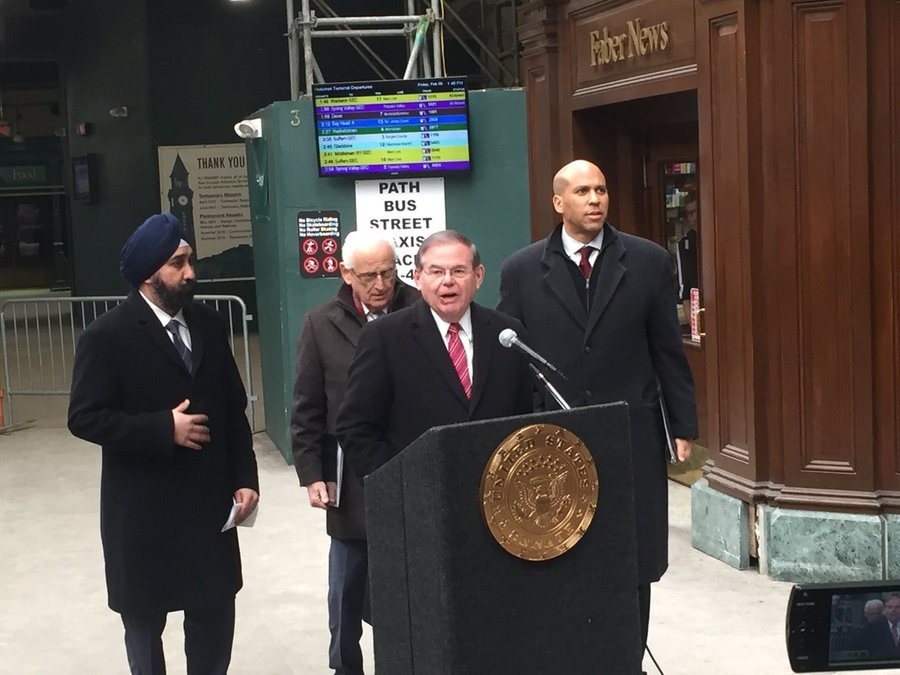 HOBOKEN — On Friday, Feb. 9 at 1:30 p.m., Hoboken Mayor Ravi Bhalla and Senators Bob Menendez and Cory Booker, as well as Rep. Bill Pascrell Jr. held a press conference regarding the National Transportation Safety Board’s (NTSB) 17-month long investigation into the fatal September 2016 train crash at Hoboken Terminal.
Over 100 people were injured and local mom Fabiola Bittar de Kroon was killed by falling debris.
Menendez is the ranking member on the Senate’s mass transit subcommittee and Sires is a member of the House Transportation Committee.
The press conference discussed efforts to improve rail safety and implement the NTSB recommendations after it determined the probable cause of the crash was the failure of the engineer to stop the train due to fatigue caused by undiagnosed obstructive sleep apnea.
The federal lawmakers have introduced legislation to mandate train personnel be screened and treated for sleep apnea before returning to full duty.
Last August, the NTSB issued a statement expressing its “disappointment” with the withdrawal of a Notice of Proposed Rule Making by the Federal Railroad Administration and the Federal Motor Carrier Safety Administration which would have considered “regulatory action to ensure consistency in addressing the risk of OSA [obstructive sleep apnea] among transportation workers with safety sensitive duties.”
“The traveling public deserves alert operators,” said NTSB Chairman Robert L. Sumwalt. “That is not too much to ask.”