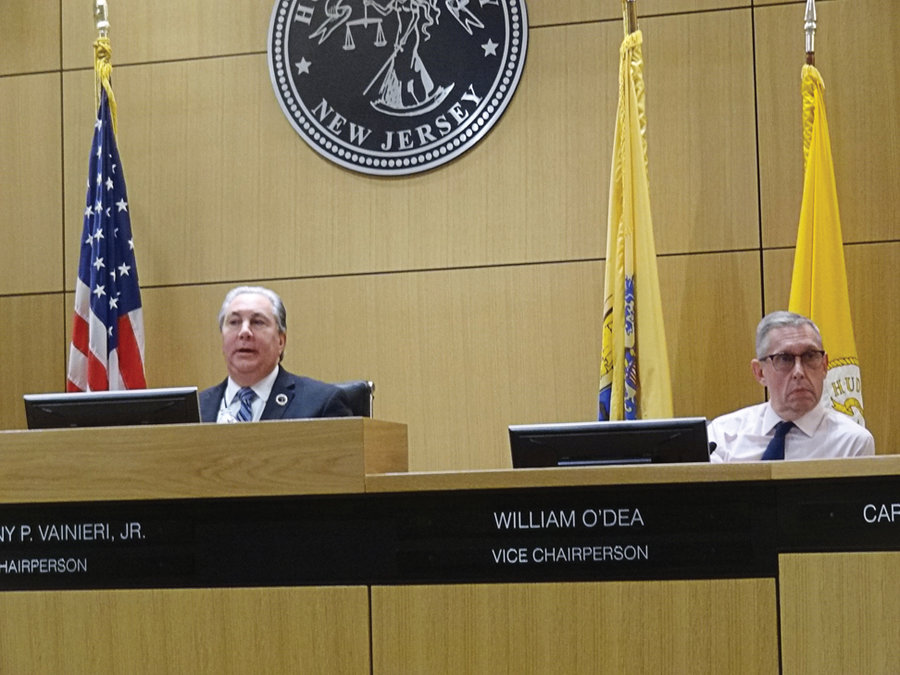 Four medical staff personnel at the Hudson County Correctional Facility (HCCF) in Kearny have been suspended and an investigation continues into six deaths at the facility over the last two years, five of them since just last June – and three in the last month.
Three of the four deaths were considered suicides, including a high profile case of a man transferred from Atlantic City who was supposed to be on a suicide watch. A woman who committed suicide was found to have more than three liters of foreign matter such as a nail clipper in her stomach.
A report on the deaths was given to the county freeholders at the Jan. 23 caucus, but many did not have time to review it. Freeholders said they would release aspects of it at a Jan. 31 special meeting.
But instead of releasing the details last Wednesday, the freeholders went into closed session to further discuss the report’s implications. They asked for a statement from HCCF Director Ronald Edwards prior to the closed session on some actions taken to deal with the jail situation.
Edwards said four medical personnel had been suspended pending the outcome of an investigation, including a director of nursing, a nurse practitioner, and two RNs.
He also said that plans are underway to reconstruct two units of the jail and build a new unit to improve monitoring of potential suicides and response time to medical emergencies.

One of the steps already taken was to install cameras to monitor inmates at risk of suicide inside their cells. These cells will be monitored by correctional officers as well as medical personnel.
A more long term solution involves a three-phase reconstruction project of facilities at the jail that will improve men’s and women’s cell blocks and construct a new medical cell facility.
The first phase of construction is already underway, Edwards said, and is expected to be concluded in late May, when the second phase will start. The third phase, building a new medical cell block, will start when the second phase concludes.
Other changes will include installation of clear glass doors that will allow for better observation of inmates.
Staff, he said, will undergo training that will allow corrections officers to apply life-saving treatment more quickly.
The jail will also make medical staff more readily available, Edwards said.
Currently the county has contracted with a registered nurse as a temporary medical director until a search committee finds a permanent replacement.
Jail medical personnel will be required to administer medical services to immigrant detainees when needed rather than waiting for permission from federal authorities. Some believe one of the deaths was a result of delays getting permission from the feds.
Staff at the jail will be trained in suicide prevention as well as crisis management. All relevant medical information will be obtained at time of a prisoner’s admission to the jail, Edwards said.
Visiting nurses will make daily visits to female detention cells. If medical assistance is needed, this will be provided immediately. A county doctor will make unannounced visits to cells containing federal immigration detainees.
The county will hold regular meetings with federal immigration officials as well.
The jail will also establish a suicide task force and a steering committee to deal with detoxification, since many of the inmates suffer from substance abuse issues, Edwards said.
A subcommittee will also be established to deal with mental health issues, he said

‘We have added corpses in the jail’

On Jan. 24, the freeholders approved spending $60,000 more on internal investigations into the deaths. On Jan. 31, the freeholders met for a special, closed-door meeting to discuss the problems at the Kearny facility.
While the freeholders’ Public Safety Committee has yet to release details concerning the deaths, sources inside the jail with knowledge of the situation said the report highlights a number of problems with the staff response to emergency situations.
In January, Dominick J. Ramunni, 41, collapsed in the gym area of the jail. It allegedly took more than four and half minutes for the jail’s medical staff to respond and attempt to revive him by performing CPR, according to the report.
Another inmate, not a guard, saw Ramunni collapse, according to sources who reviewed the report. This inmate went to a guard, who may not have been trained to perform CPR. The guard, according to this source, sought out two other guards, who apparently did not know how to perform CPR either. They finally found a fourth guard who did, but it was too late.
Last August, pressured by two deaths within a month and at the insistence of public activists, the county established a medical review panel. The panel’s task was to investigate the deaths of Rolando Meza Espinoza, who died in June in a section of jail holding federal immigration detainees, and Jennifer Towle, who died in July and was later ruled a suicide when a medical examiner discovered numerous foreign objects in her stomach, including nail clippers.
A federal Homeland Security Report issued late last year said the Hudson County Correctional Facility (HCCF) had problems with providing medication to inmates and dietary issues. The lack of needed medication may have contributed to one or more of the deaths at the jail.
HCCF Director Edwards said changes made to operations may have already saved the life of an inmate whose was found with no pulse.
“Two corrections officers worked for 15 minutes to save the inmate’s life, shocking him three times to get his heart started,” Edwards said. “That inmate is now recovering in Jersey City Medical Center.”
Troy Mack, from Veterans for American Ideals – an activist who has been critical of the jail operations – said while he admired Edwards “good faith” efforts at trying to correct the situation at the jail, more needs to be done.
Mack was among the activists who appeared before the freeholders following the deaths in June and July, pressing the county to take action.
“Now it’s five months later, and we have added corpses in the jail,” he said. “You need to review the command climate and culture at the jail.”
The county needs to better train the staff to deal with medical and other kinds of distress among the inmates, he said, to avoid loss of life.

Freeholder Bill O’Dea pressed the freeholders to release to the public more information contained in the report, saying that this will give the public an idea of the issues the county faces and what is being done to resolve these issues.
“A lot is being done, but this is a serious problem,” O’Dea said.