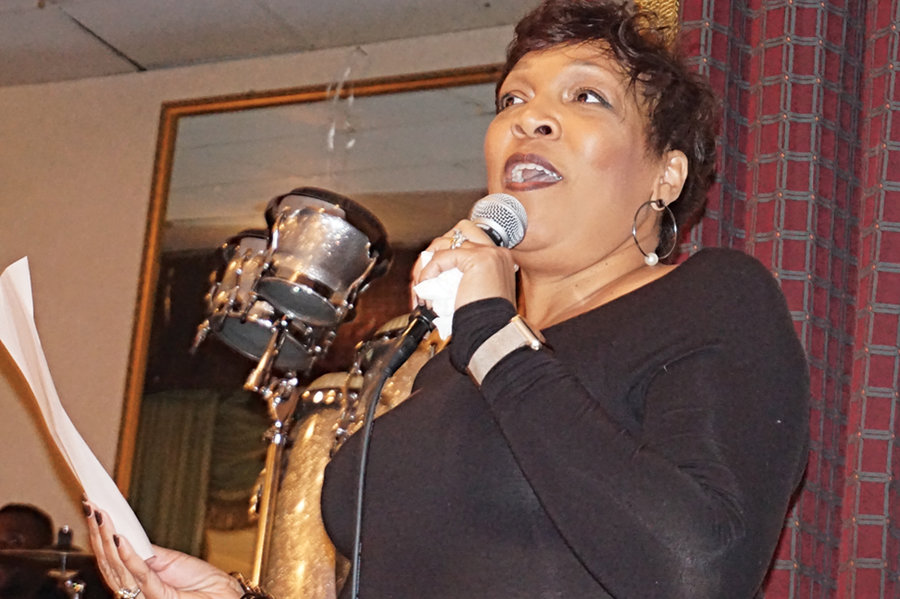 “The way this works is that we have a microphone with an exceptionally long wire,” said Dave “Doc” Watson, encouraging audience members to sing before their peers at the Bayonne Economic Opportunity Foundation’s “Everyday Excellence” event, which celebrated the black community and its histories on Thursday, Feb. 8 at the Polish American Community Center.
Student essays on black history were read aloud, the Bridge Art Gallery decorated the room with works from local black artists, and guests became entertainers as Doc Watson summoned them to the dance floor.
“Come on. Take your shoes off and come out here,” Watson said to one reluctant woman whose powerful rendition of “Oh Happy Day” would garner enthusiastic applause.
The jubilation of the evening belied the constant, deep sense of injustice evident in black American history and experienced by communities of color.
“That we portray black history in one month is crazy because we started this land,” said Kenny Britt, a black man from Bayonne who also plays with the New England Patriots. At the celebration, he and his family were the life of the party, standing, laughing, and dancing to every song.
“We didn’t magically appear and poof, we’re here,” said Britt. “We were among the first to come to this land, on our hands and knees, with blood, sweat and tears. And we’ve done it being looked down on as people. We don’t get credit enough for what we contribute to this great nation that we all live in. You can’t move past this era without recognizing that.”
Britt’s profession is front and center in the country’s continued reckoning with structural racism. In 2016 San Francisco 49ers quarterback Colin Kaepernick first “took a knee” instead of standing for the National Anthem in protest of violence against black Americans.
As other players followed suit, President Donald Trump launched a jeremiad against Kaepernick, the players who joined the protest, and the entire NFL. He framed Kaepernick’s action as an assault on veterans, police, the anthem, and the American flag instead of a protest against racism. He called players like Kaepernick “sons of bitches” who should be “fired.”
“Because I play a sport and make a certain amount of money, people will say it’s a handout. But people don’t see what our color and identity is,” said Britt. “In our world, we’re only successful if we catch a ball, rap, or try to entertain.”

“A big struggle for women of color is having a voice,” said Jaye Wilson, 33. “It’s a challenge because [women of color] are worthy of sitting next to their [male] counterparts.”
Wilson also said that Americans should challenge negative stereotypes of women of color that effectively disempower black voices.
A lot of people, she said, have this preconceived notion of the “angry black woman. And if we speak up for ourselves, we are automatically aggressive and have an attitude.”
Freeing black women from those cultural binds requires a dramatic change in the dominant perceptions of people of color and women.
In honor of one of the first black female obstetrician-gynecologists, Dr. Lena Frances Edwards, who was from Jersey City, Asma Khelili, a 7th grader who won the Black History Month essay contest wrote, “The very endowment of American freedom has been built based on the persecution of blacks. It is important to reflect on their courage and strength to overcome hardships as they continued to believe and achieve regardless of the prejudice they were facing.”
Khelili was honored at the celebration along with two other contest winners, 6th grader, Valerie Aguilar, and 7th grader, Richard Moreira.
She wrote that Edwards, who was born in 1900 and died in 1986, was “a remarkable woman, mother, and doctor, who perpetually worked hard and put others before herself.”
Today, only two percent of practicing physicians are black women, according to federal labor statistics, indicating a long road of continued struggle.
The Polish American Community Center and the Bayonne Economic Opportunity Foundation have hosted a series of events in the last year celebrating various ethnic groups in the city. One night was dedicated to Italians, another to the Polish, and another to Mexicans.
“Did you see Salsa Night where all the Mexican people came out and said ‘here we are,’” said Watson to the audience. “That’s why we got to keep this going.”