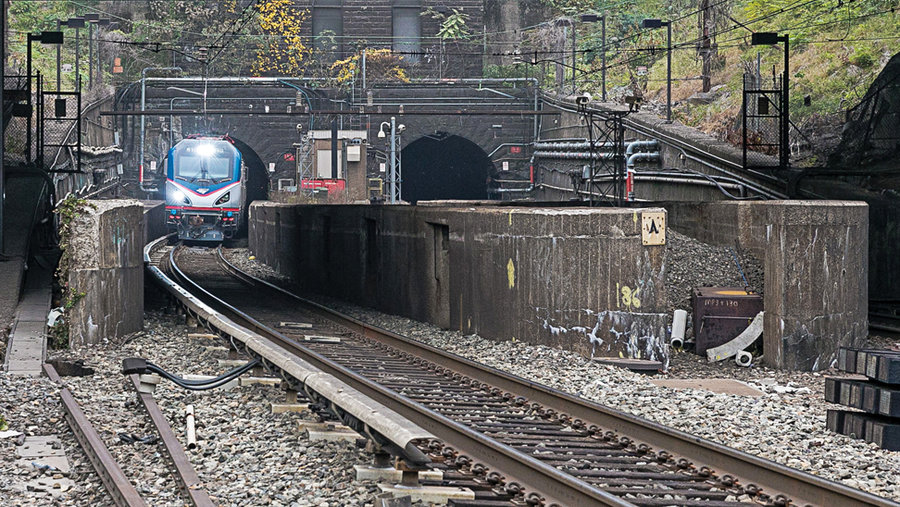 New Jersey Transit, in conjunction with the Federal Railroad Administration (FRA), held a public information session in North Bergen on Jan. 30 regarding the Hudson Tunnel Project.
The long-hoped for project seeks two goals. First, it would create a new trans-Hudson rail tunnel between New York Penn Station and New Jersey, and second, it would preserve the current North River Tunnel, the only working passenger rail tunnel between both states, after Superstorm Sandy severely damaged its components in 2012. Today both Amtrak and NJ Transit use the North River Tunnel. But the Hudson Tunnel Project would relieve it.
The Hudson Tunnel Project is one phase of the Gateway Program, Amtrak’s plan to double rail capacity on the Northeast Corridor between New York and Newark Penn Station.
Amtrak, which owns the North River Tunnel, will be responsible for the project’s design and engineering. It will also coordinate with NJ Transit and the FRA, which prepared the project’s Draft Environmental Impact Statement (DEIS), and the Port Authority, which will be responsible for project coordination and development.

Currently, there is $5.5 billion marked for the $12.7 billion project, according to Craig Schultz, a spokesman for the Gateway Program. That money will come from New Jersey, New York and the Port Authority. However, federal assistance to cover the remaining cost is up in the air at this point.
In 2015, former Pres. Obama struck an agreement with New York Gov. Andrew Cuomo and former NJ Gov. Chris Christie to have their states fund 50 percent of the project, and for the Federal Transportation Administration cover the rest.
But in December, Donald Trump scrapped Obama’s funding proposal. His FTA argued that responsibility for funding the project came from the local level, and the previous deal was “non-existent.”
Even with the rejection, however, officials are still hopeful the Trump Administration will come around.
“This is a project of national significance,” Schultz said after the presentation at the Lido Restaurant on Tonnelle Avenue.
“It supports 10 percent of America’s gross domestic product. Four hundred and fifty trains a day run through the Northeast Corridor (NEC), which stretches from Boston to Washington. No project with national significance in this county gets done without a federal funding partner. So we’re working very closely with the U.S. Department of Transportation to make sure everyone understands the urgency and need of this project.”
If federal funds are not available by 2019, the project’s timeline may need adjustment, but officials have applied for the FTA’s New Starts funding program.

Construction is planned to begin in 2019 in North Bergen, according Schultz.
If all goes according to schedule, the new tunnel will open in 2026, and the rehabilitated tunnel will open in 2030. During the new tunnel’s creation, the current one will remain open, Schultz said. Once the new tunnel opens, trains will be rerouted through it as its predecessor will close for repairs.
The new tunnel’s alignment will mirror the current Northeast Corridor, with parallel surface tracks from east of Secaucus Junction.
The new tracks will also go under the Palisades near Tonnelle Avenue, as the current tunnel does. However, they will branch off from the NEC at that point and curve south to a new ventilation facility around the Hoboken/Weehawken border before crossing under the river to connect with New York Penn Station. NJ Transit owns the land to be used for the ventilation facility, previously planned for the ARC project.

Construction will inconvenience North Bergen residents near Tonnelle Ave and 21st Street for a few years.
“This is a project that will likely generate a significant amount of truck activity,” Schultz said. “We’re going to be removing some of the excavated material from the tunnel. There’s obviously construction noise.”
To compensate, the project’s team is establishing mitigation efforts to control the project’s impact.
Officials will offer free noise-proof windows to residents in the affected areas. Lighting for the construction site will face downwards, so as not to shine into people’s homes.

Steven Caruso, a property owner in the construction area, expressed concerns about noise and capacity increases at the meeting.
Despite officials telling him the project will not increase train volume until after the Gateway Program is completed, Caruso was not convinced an increase won’t happen sooner.
“My common sense tells me that there’s going to be an awful lot of capacity built, and I’m just not really buying that there won’t be any more trains going through there,” Caruso told a NJ Transit official. “Maybe not today, maybe there’s no plans for it, but I eventually feel like there’s going to be more trains.”
Caruso noted that the area hears constant horns from trains leaving the North River Tunnel, night and day.
“I’ve got those sounds memorized,” he said. “They’re imprinted on my brain.”
Caruso said that the new tunnel is situated even closer to his property than the original. He worries it will damage his property values later on.
“The value of my property is dependent on a lot of factors, and one of them is noise pollution,” he said. “So all those things really go into it.”
“In and of itself, this project by itself does not lead to any new capacity,” Schultz later reiterated, after the presentation. “There’s no room at Penn Station itself, currently. You could build 12 tunnels under the river, but there’s no more tracks to expand service.”