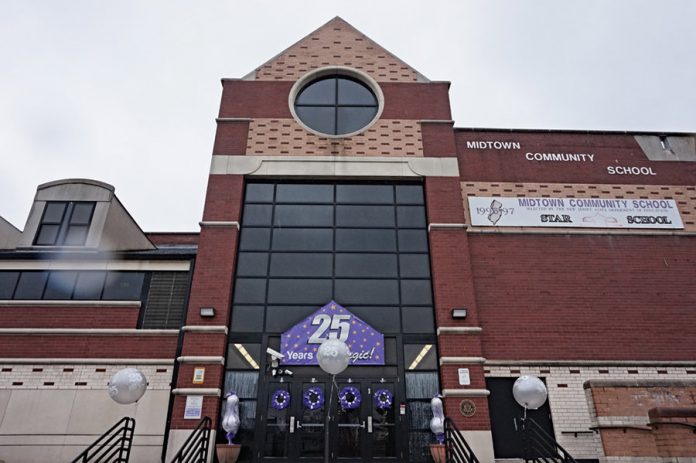 Children acted skits of Midtown Community School’s history at a 25th anniversary celebration on Friday, Feb. 23.
“There were two schools in dire need of a vision, Roberson and Roosevelt,” said a teacher narrating introductory cues to a line of student performers on stage. “How much will this cost,” asked the first performer. “I think we need to think about the children and what will be best for them,” said another. “Hey guys I have an idea.”
Midtown Community School was built in 1992 for students at two closing schools, Roberson and Roosevelt. The district rented St. Henry’s Church on 29th St. for Roosevelt students, while the Roberson building was deteriorating. In their first year at Midtown, students picked a bear as a mascot, which was acted out by current Midtown students. “Should it be a wizard, should it be a penguin, should it be a bear,” the students said.

“The most exciting thing that can ever happen is to see a school open for the first day,” said Midtown Community Principal Christina Mercun, who was there on opening day in 1992. She’s been the school’s principal since 2000 and second since founding Principal Patricia McGeehan became Superintendent.
In 1992, Mercun coordinated grants to fund efforts to organize the 900 students into one school. Now, the school hosts 1,200. In 1997, five years after its founding, Midtown Community School became the first public school in Hudson County to win a Blue Ribbon Award.
The school’s founding legacy in technology and innovation helped bring education in Bayonne into the 21st century. It was constructed with a T1 line, the first cables that enabled a facility to access broadband internet, beating to the punch the simultaneously constructed Liberty Science Center, which installed the lines after construction.
“People from all over the state came to see our beautiful building,” said former Principal and Superintendent Dr. Patricia L. McGeehan in a January interview with the Bayonne Community News. “It became an icon for visitors.”
“When we opened, we had things like CD-ROMS and laser disks and Macintosh computers,” said Mercun.“When I say that to kids, they’re like ‘what.’ I know that was olden days and now they’re way past what we ever expected to be.”

The school’s creative spirit is still in force 25 years later. “It’s not only still here,” said Mercun.“It’s flourishing. In the end, the people who make a school a school are the ones who really want to make it a success.”
For the Feb. 23 performance, Midtown staff broke into 15 committees to work with students in putting the show together and displayed historical timeline posters of the school’s history in the front hallway. One staff member dressed as Cinderella to greet kids in the hallways in the spirit of the event’s “magic” theme.
At the ceremony, the audience observed a moment of silence in honor of Dennis Miranda, a Midtown Community School graduate and Navy SEAL who died in a 2010 helicopter crash in Afghanistan.