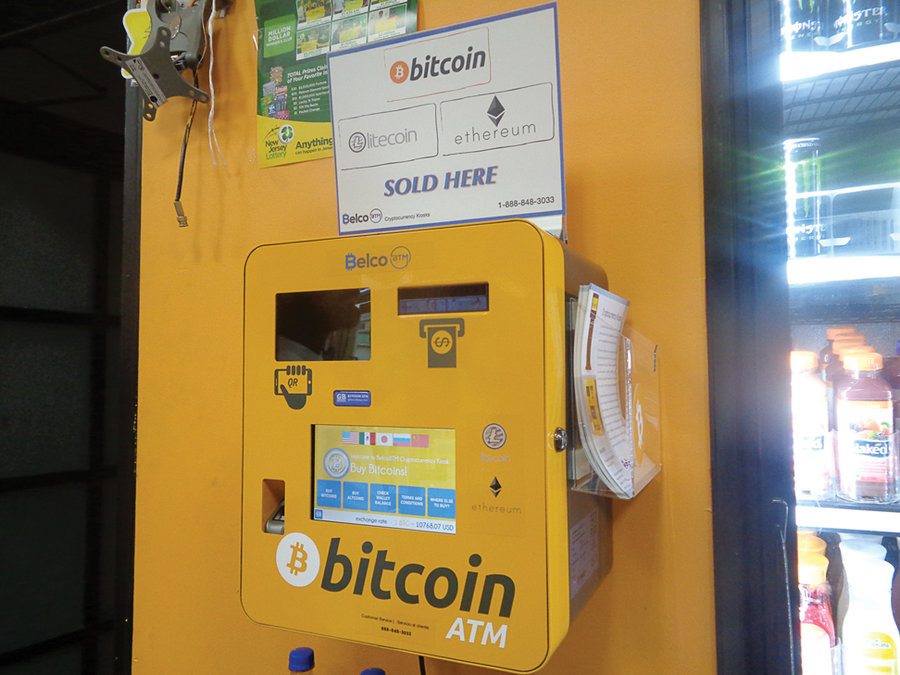 There’s a new ATM machine in town, but it doesn’t dispense real money.
The machine is next to the counter of the Delta Food Mart convenience store on JFK Blvd. and 91st Street. Its label, “Bitcoin ATM” may clue customers in to its unusual nature: Users can put regular money in, and it’s converted to “Bitcoin,” or cryptocurrency.
Bitcoin is virtual money that’s transferred electronically from one user to another, worldwide, in an instant. It recently rose in value, then lost some steam, drawing new investors and new publicity.
Bitcoin first launched in 2008, as an answer to that year’s historic stock market crash, filling a void for those disenfranchised in traditional investment companies.
Users store and transfer the money via a variety of different digital, hardware, and even paper wallets, each featuring public and private keys storing information allowing them to spend Bitcoins.
These anonymous transfers happen through a technology called “Blockchain,” a digital ledger that records transactions across online computer networks.
Belco BTM, a New Jersey-based cryptocurrency company, operates the kiosk in North Bergen.
The company has also installed the kiosks at locations in Jersey City, West New York, Bayonne, and Union City. Today, it has eight locations in the state.
The kiosks are now available in four Jersey City locations, including JBM Tech store, Paradise Deli and Grocery, Deli LLL, and the Hudson Greene Market.
In West New York, one is located at the A&G Multiservice, and another in Union City’s Peluqueria Vargas Salon. Bayonne has a kiosk at the Teamwork Wireless store.

How the machine works

The Belco BTM kiosk allows users to transfer U.S. dollars into actual Bitcoins, or competing cryptocurrencies such as Litecoin and Ethereum.
Users wishing to transfer their money into a cryptocurrency must first download an app so that their phone has a “Bitcoin wallet.”
Then, at the BTM machine, they enter their phone number. The machine then sends an SMS code to their phone. Users put the code into the machine. The machine asks a destination address, which is the address of the wallet. Users then enter how much cash they want transferred. The machine shows how much their money is worth in Bitcoin at that time.
“I put $20 in,” explained Rajan Fnu, Delta Food Mart’s owner, at his store last week. “They took out a percentage. I got $17, $18 in Litecoin. Yesterday, Litecoin went up, so it grew up to $25. I can go to one of the machines and take out $25 in cash.”

Hudson County’s interest in Bitcoin is steadily growing. In 2014, Jersey City’s Helen’s Pizza began accepting Bitcoin payments for ‘za slices. AdRite Solutions, a small digital marketing firm in West New York and Secaucus, has also began accepting Bitcoin payments.
Worldwide, brands including KFC Canada, Microsoft, and Subway have signed on to the Bitcoin train.
“In North Bergen, about two months ago, we got a user there who was going to our other location in Jersey City,” said Belco COO Wael Mahmoud. “And he started to talk about a demand there, and if there’s a possibility we could have something in the area. He actually suggested we install there. So that’s why we chose North Bergen. The Delta was the best location.”
According to Mahmoud, the store also had Money Gram, meaning it was familiar with money services.
The surrounding area also has a young population, Wael said. Perhaps the type that would love to show off their cryptocurrency prowess to that special date?
The company also determined that Delta had better security than other possible locations.

Bitcoin hasn’t been a unanimous success. Bitcoin’s worth in U.S. dollars has fluctuated. In four years, the currency increased in value by over 5,000 percent. However, one year after Bitcoin grew in value to $1,000 U.S. (meaning, at that time, one Bitcoin was worth $1,000), it decreased in value to $200. After a steady rise over the following years, Bitcoin again rose to $1,000 in value last January.
On Friday afternoon, Feb. 16, 1 Bitcoin was worth $10,772.08 USD, but there’s no guarantee it’ll stay that way for long, or even through the next day.
Because they are so valuable, people often buy and pay in small fractions of bitcoin, like .0001 bitcoin.
“Sometimes it goes up, sometimes it goes down,” Fnu said.
That tendency is why many Bitcoin investors use it as an experiment, investing little and playing the waiting game to see if the currency will remain in the black consistently.
Another point of contention for some is Bitcoin’s potential security breaches. For many years, hackers have robbed Bitcoin investors’ wallets, getting away due to the currency’s anonymous transactions. Recently, a Ukranian hacker group named Coinhoarder was found to have stolen over $50 million in cryptocurrency from one of the most popular digital currency wallets.
Mahmoud counters that the networks transferring the money are being hacked, but not necessarily Bitcoin itself.

The future of money?

There’s no doubt Bitcoin has gained traction in its 10 years. But are digi-dollars going to replace actual ones in time? Or is Bitcoin just some futureless buzzword insider techies use to sound cool?
“In the future, you buy something, like a drink of water,” Fnu said. “If you don’t have a card or cash, you can pay as a Bitcoin.”
He decided to let Belco install their latest kiosk machine in his store because “I just want to try it-everybody says it’s the future. I want to be ahead of the curve.”
“Six months ago, things went crazy,” Mahmoud said. “Especially when Bitcoin started to hit, like $2,000, $3,000 and $5,000 USD. People are calling me all the time, asking questions. A year ago, no one cared when you were telling them that you were doing or having special business related to cryptocurrency. No one even understood what it was.”