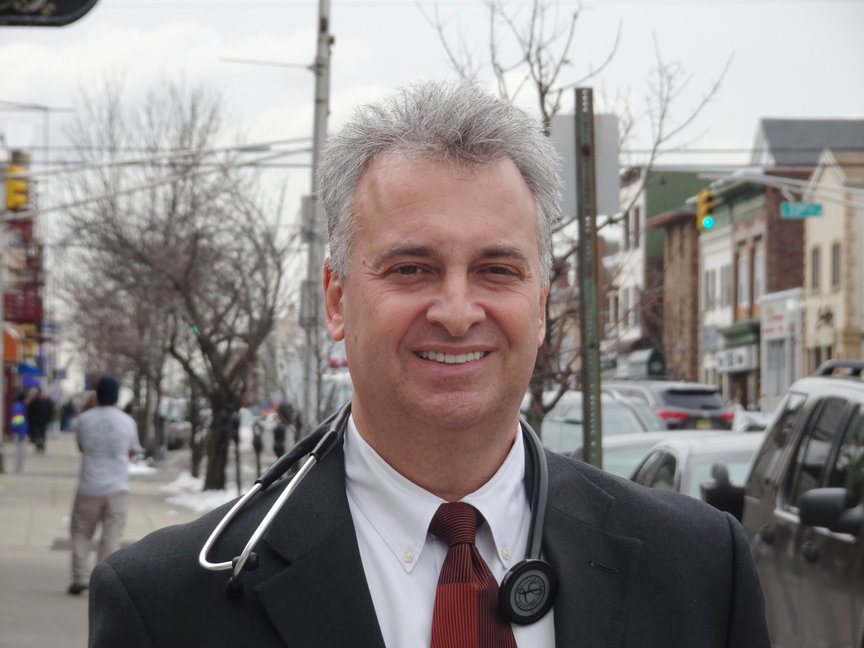 Dr. Mitchell Brown announced that he will run for Mayor of Bayonne on May 8.
×

Dr. Mitchell Brown announced that he will run for Mayor of Bayonne on May 8.

Mitchell Brown, a physician and attorney with a longtime private practice in midtown on Broadway, will run for Mayor of Bayonne on May 8 against incumbent mayor and former police officer James Davis and former assemblyman and firefighter Jason O’Donnell.
Brown, who practices geriatrics and internal medicine, advocates for a municipal government that gives a stronger helping hand to the oldest, the sickest, and the youngest community members while attracting new, young professionals to help build the tax base over time and induce demand for higher-end retail on Broadway.
Brown supports a wide-ranging set of policies that include stronger, more affordable before-and-after-school care for children; for seniors, property tax breaks, “social support,” and improved transportation services; a new community center for teens, higher teacher pay, stricter enforcement of building codes, and the hiring of behavioral health professionals to work alongside police to help “police become more sensitive to emotionally disturbed people.”
He also supports new real estate development, along public transit corridors and on vacant land, the kind of development that attracts new residents.
“Every project has to be judged on its own merits,” Brown said. “If it’s going to have its own parking facilities, not going to be a burden on the infrastructure, police, and the school system, then there should be more flexibility in negotiating for PILOTs [Payments in Lieu of Taxes] or abatements.” said Brown, agreeing with his two opponents. “What we really need in Bayonne is to increase the median income. Without increasing that income we won’t attract prime retail along Broadway.”
Brown spends a lot of time with Bayonne’s elders and is troubled by a lack of “social support” in their lives. “A lot of the seniors don’t have activities and groups for support,” he said. “And on fixed incomes, they can’t afford these heavy tax burdens. Many of them have houses that are paid off, and they still can’t afford to stay in their houses.”
He proposes new companion and homemaker services for seniors, staffed with a combination of volunteers and certified professionals.

Brown has identified the driver of these social ills: too few resources for education and city services and too much for the police and fire departments.
“It’s all a matter of realigning your budget priorities,” Brown said. “Right now, we have a municipal government run for the benefit of police and firefighters. I support what they do wholly, but at this point the culture has lacked innovation and has been too focused around them. If we don’t start changing to mayors that are not police and firefighters you’re going to keep seeing inflated budgets for fire and police at the expense of everything else.”
Brown cites overtime, “abuses of promotion to inflate pensions,” and “excessive payouts” for unused sick time as eating up resources that should be allocated for teachers and services for seniors and youth.
“Teachers are making a third of what police make but teachers can’t seem to get a fair contract,” he said. “We’re losing teachers to other municipalities for higher pay. It’s not acceptable.”
The school district’s contract with the teachers’ union, which is mostly retroactive after teachers went 18 months without a contract, expires in June and was signed in January of 2017.
With two children in elementary school, Brown said that he worries about teacher attrition rates and a “brain drain” of educators from the city’s schools that result from municipal government’s unwillingness to pay competitive salaries.

Bayonne has 27.3 police officers per 10,000 residents, according to 2016 FBI Uniform Crime Reporting data, at a cost of roughly $30 million per year in personnel, according to the most recent city budget, which is up from roughly $24 million in 2016. The fire department costs about the same. Bayonne’s is the highest ratio in the county among cities under 100,000. Jersey City has 32.5 police officers per 10,000 residents. Nationwide, the average ratio for cities with populations between 50,000 and 100,000 is 16.1.
According to the data, crime rates have been down in Bayonne since 2011 in many categories such as aggravated assault, burglary, and property crime. Violent crimes in total have decreased since 2015. By contrast, Jersey City has experienced a disturbing uptick in gun violence in recent years.
“If Jersey City has similar ratios but higher per capita crime rates, then we’re over policed,” Brown said. “It’s crazy. Police are everywhere. You walk down a street in Bayonne, and there’s a guy digging a hole and next to him there’s two police officers watching. There’s no reason why the taxes should be this high to support police and fire departments.”
In response to mass shootings that have gripped the nation in recent months and years, James Davis and Jason O’Donnell have proposed hiring either active or off-duty police to work inside the schools.
“No, that’s just what you’d expect from them,” Brown said. “I don’t think more police is the solution. That would be a huge expense and probably unnecessary given the actual risks of an attack.”

But policing is about more than just keeping people safe. Tickets are a major source of revenue for many cities and municipalities. Bayonne took in nearly $2 million in municipal court fines in 2016. To augment some of that revenue, Brown proposes stricter enforcement of building codes.
“More of a burden should be placed on property owners neglecting properties,” Brown said. “For some reason, building codes are not enforced in town. That weakens incentive for owners to improve their properties or sell those properties.”

Brown moved to Bayonne after studying medicine in the Dominican Republic, converting an old bar on Broadway formerly called Chippey’s into a medical office to practice internal medicine and geriatrics. After 17 years in medicine, Brown earned a law degree from Rutgers School of Law in Newark.
He has two young children who attend Robinson Community School. He is also an active member of the medical staff at Bayonne Medical Center, has been recognized by Castle Connolly as a “Top Doctor” for the past 20 years, and is a recipient of the “Award of Merit” from the National Center for Missing and Exploited Children. Brown identifies politically as a Democrat, as do his mayoral opponents.
Brown, who said that he would continue his private practice if elected, would be the first Bayonne mayor to hold both a law and medical degree, but not be the first to hold either. The last attorney, Leonard Kiczek, was elected mayor in 1994. The last doctor, Bert Daly, was first in elected in 1914. He, too, had a second career – an infielder for the Philadelphia Athletics in the early years of Major League Baseball.