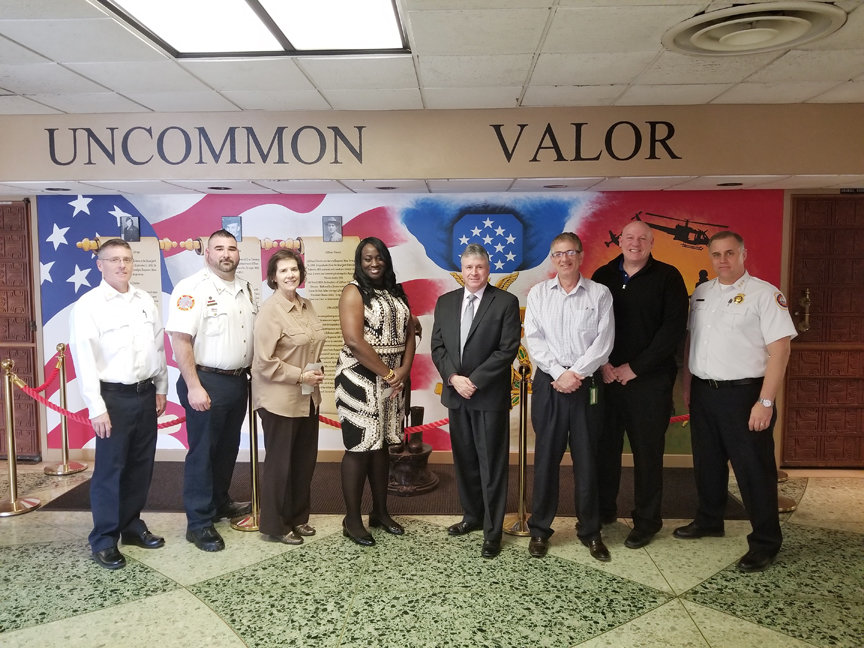 The First Annual Chili Cook-Off, hosted by the Bayonne Chamber of Commerce and the UEZ at the Polish American Home, turned up four winners, or “Top Dogs.” (See brief.)
×

The First Annual Chili Cook-Off, hosted by the Bayonne Chamber of Commerce and the UEZ at the Polish American Home, turned up four winners, or “Top Dogs.” (See brief.)

A 13-year-old was arrested last week in connection with social media threats made to schools in Bayonne, according to city officials.
The child was arrested for allegedly publishing a “copycat” threat to SnapChat on March 5 that referenced a similar, earlier threat published to Twitter,
“The SnapChat message was meant to indicate that All Saints Catholic Academy would also be included in the attack referenced in the earlier message,” Mayor James Davis said on Facebook on March 14, referencing All Saints Catholic Academy on West 13th Street. “It is important to note that it was determined, through the detectives’ investigation, that there was no validity to the threat made in the SnapChat message.”
The 13-year-old, a Bayonne resident, was charged with false public alarms and terroristic threats, according to Davis.
“The Bayonne Police Department, along with other partnering law-enforcement agencies, have been continuing their investigation into the online threats made against our schools,” Davis said.
“I want to reassure all students, parents, faculty, and citizens of Bayonne that we are committed to identifying all the actors responsible for these threats.”

NJ Gov. Phil Murphy told the NJ Transit board on March 14 that he hopes the agency will see him as a partner who wants to restore its former status as a model transportation system, NJTV reports. On Tuesday, Murphy included a $242 million increase in state financing for the agency.
A day after presenting the $37.4 billion budget proposal to the Legislature, Murphy spent the next day campaigning for his plan, The Record reports. The governor ended his day with a town hall-style meeting in Paramus, where he contended that the $1.6 billion tax increase in his plan will increase the value of living in New Jersey. Among the many proposals, Murphy calls to fully fund the public school funding formula, raising money through a millionaires’ tax on individuals, and restoring the 7-percent sales tax.

Due to forecasts of up to a foot of snow or more, the CarePoint Health Easter Egg Hunt originally scheduled for Thursday, March 22 at Bayonne Medical Center has been rescheduled for Thursday, March 29 from 3 to 5 p.m. on the hospital’s front lawn.
At the event on March 29, attendees can also have their picture taken with the Easter Bunny. Entertainment will be provided by PAL Children.
Popcorn and pretzels will be part of the fun. Children from 1 to 8 years old will also receive a small stuffed toy.All Bayonne families are welcome.
CarePoint Health-Bayonne Medical Center is at 29 East 29th Street.

Gun incident at BHS not reported for two days

The November BHS incident in which a varsity hockey coach allegedly pointed a handgun in the direction of a student was not reported by the team’s coaches to school administration and police for two days, according to a report on NJ.com that references the police report.
In the report, the incident was not reported until after the victim’s father threatened to “come down here with my own gun.”
The delay is in violation of school district policywhich cites that “a teaching staff member must report immediately to the building principal any accident or safety hazard the member detects.”
In the November incident at Bayonne High School, a teacher and assistant coach allegedly pointed a weapon in the direction of a student and another faculty member. The handgun belonged to a NJ State Trooper.
The head hockey coach, David McKenna, allegedly pointed a handgun that belonged to a State Trooper in the direction of a senior student and faculty member while in the coach’s office at the Richard Korpi Jr. Ice Rink on November 30. According to the police report, Assistant Coach Nicholas Brancatella and Assistant Coach Scott Lewkowitz allegedly were in the room when it happened.
According to the NJ.com report, Lewkowitz called Assistant Superintendent Kenny Kopacz more than 24 hours after the incident and after he was confronted by the angry father of the player involved.

Amazon will lay off 36 Jersey City employees and transfer 41

Amazon will lay off 36 Jersey City employees and transfer 41 others to its offices in Newark and New York City, effective May 31, according to a story on njbiz.com, an online business journal.
Amazon employs around 100 people in Jersey City and more than 14,000 people throughout New Jersey, according to the story.
The company posted a WARN disclosure about the Jersey City departures on Thursday. The Worker Adjustment and Retraining Notification, or WARN Act, is a federal law requiring companies to publicize layoffs of certain sizes under certain circumstances. New Jersey also has its own WARN law requiring companies to file a public notice to be filed when 50 employees are being laid off or transferred.
The news comes as Amazon is searching for a second headquarters, with Newark among cities short-listed for that project.
The transferred employees will keep their jobs and pay. The laid-off employees work in Amazon’s consumer and retail businesses, a spokesperson said, and Amazon will try to find them similar jobs within the company.

The March 4 cover story that appeared in several of the Hudson Reporter’s newspapers – “The truth about fake news” — garnered more than 30,000 hits on the Reporter website in the five days after it was published, and was mentioned in a roundup of notable newspaper articles on Columbia Journalism Review’s website on March 7.
The story looks at the dangers of fake news both to individuals and to the country, how fake news about Hoboken spread nationwide after it was published, and how Donald Trump’s labeling fact-based news outlets “fake news” can make the country more open to propaganda.
To read the story, go to https://tinyurl.com/fakevsfactsHR.

The Assembly Labor Committee voted unanimously to advance a measure that would make it illegal for employers to pay women less for doing “substantially similar work, when viewed as a composite of skill, effort and responsibility,” NJTV reports. Victims could be awarded up to six years of back pay with triple damages. The bill now goes to the full Assembly.

Toys R Us to sell or close all its U.S. stores

Toys R Us, which has headquarters in Wayne, told its employees Wednesday that it is seeking a buyer for all its U.S. stores and that the stores will be closed if a buyer is not found, The Record reports. A motion to liquidate the company was presented to Bankruptcy Court last week. Customers across the country who grew up going to the store said they were saddened by the news.
Hudson County is home to three Toys R Us department stores: one in Secaucus that doubles as a Babies R Us, a Toys R Us Express in Newport Mall, and a regular department store at the Hudson Mall on Route 440 in Jersey City.
On Facebook, Mike Morris, a Bayonne resident shared a meme that depicted a Toys R Us department store and read “Thanks for the memories.” Another showed the company’s longtime mascot, a giraffe, crying with text that read “I will always be a Toys R Us kid.”

In the March 7 issue of the Bayonne Community News, we mistakenly wrote that a handgun belonging to a Hudson County Sheriff’s Officer was involved in a November incident at Bayonne High School in which a teacher and assistant coach pointed a weapon in the direction of a student and another faculty member. The handgun belonged to a NJ State Trooper.

Heads roll at the BBOED