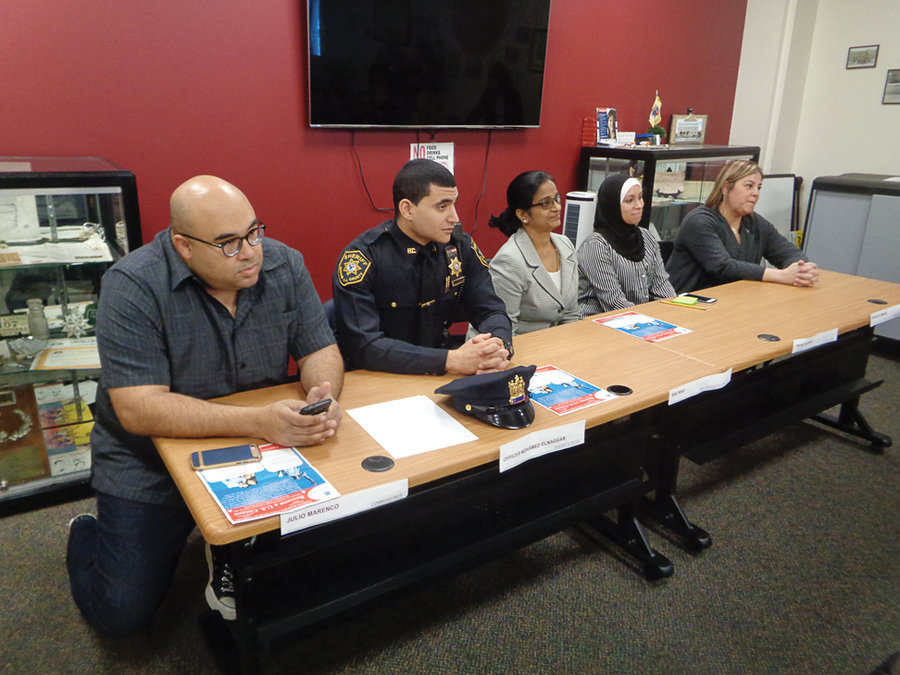 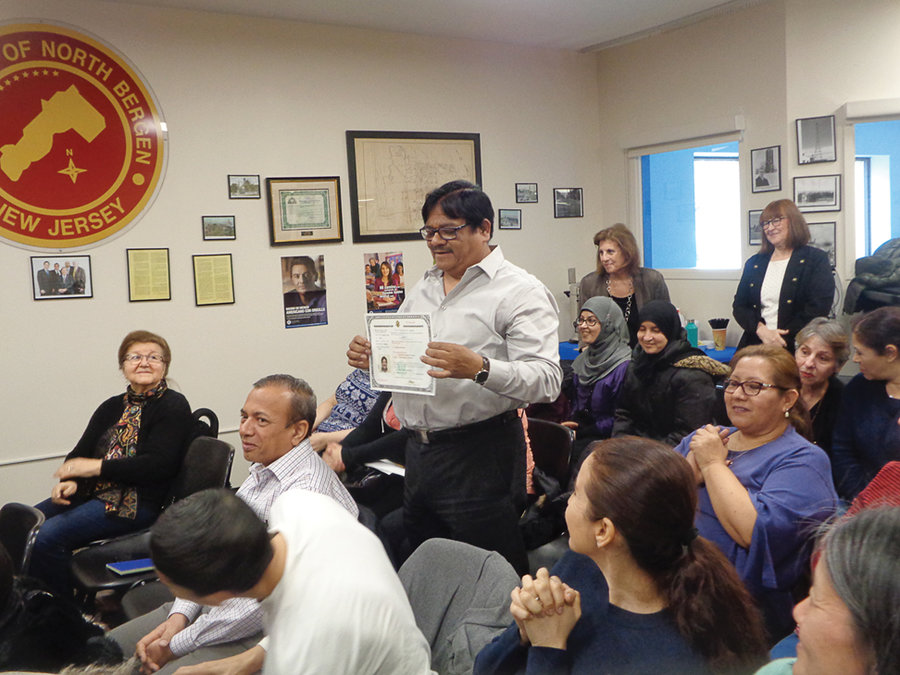 Eduardo Meliton Changa first immigrated to America from Peru in 2001, seeking the “American Dream.” He accomplished that, living in West New York and then purchasing his first home in North Bergen in 2014.
Today, he works as a printing supervisor for Blanc Industries in Dover. But through all of that, he was still waiting to officially become a citizen. He had his Green Card since 2011, which means he was a legal resident, but not a citizen.
That finally changed after he took a special class at the North Bergen Public Library earlier this year. In January, he became a citizen.
The 15-week program is free, and open to anyone with a Green Card. The Department of Homeland Security awarded the library a Citizenship and Assimilation Grant to fund the program.
Interested parties, who do not have to reside in North Bergen to join, can contact the library at 201-869-4715 for information on upcoming classes.
The library recently hosted a forum for students who will take their citizenship tests soon. It allowed them a chance to work on their English speaking skills for the exam with special guest speakers.
The classes proved highly beneficial for Changa. “I improved my English,” Changa told the forum attendees, after showing off his citizenship certificate.
Changa had some advice for program’s participants before their big exam. “Study hard,” he said, after the forum. “Use the library to reach that goal. I started here, and I finished here.”
The forum featured North Bergen Commissioner Julio Marenco, Horace Mann teacher Imane Doukali, Library Director Sai Rao, Hudson County Sheriff’s Officer Mohamed Elnaggar, recent citizen Andrea Castro, and District 32 Assemblywoman Angelica Jimenez—all of whom are either immigrants or the children of immigrants.

You can do it!

New York City-born Jimenez may not have had needed the test because she grew up in America. But her Cuban parents did not allow her to speak English at home.
Jimenez said she couldn’t speak English as a youth, which angered one of her teachers in West New York when she was around 5.
“When I got to the school here, I didn’t have such a nice teacher,” Jimenez said. “She threw a book at me and I passed out. It knocked me out.”
The experience spurred Jimenez to spend that summer watching Sesame Street to help her learn English.
Jimenez remembers waking up by the principal’s office. Surprisingly, her mother blamed her for the teacher’s actions, saying, “Because you weren’t speaking English, Angie.”
Today, “Now I make up; I talk too much!” she said.

She added advice for the participants before their exam: Say, “Please, slowly,” to the people asking test questions; answer slowly; and don’t feel rushed to finish.
Marenco, born to a Salvadorian father and Dominican mother, also doled out friendly support. “I read [the test] is 15 minutes,” he said. But “fifteen minutes is nothing compared to what a lot of you have done to get to this country and get to this place.”
Elnaggar, a Bayonne native, was born in Egypt before coming to America at three weeks old. He graduated from Marist High School in 2010, later graduating from New Jersey City University in Jersey City in 2015, when he entered law enforcement.
“In any country, it’s hard to get into law enforcement,” Elnaggar said. “It’s a job everyone wants, and you have to be dedicated and motivated. Just how all of you are sitting in here, wanting to get your citizenship.”
Originally from Morocco, Doukali migrated to New Jersey at seven years old. She took the citizenship test years ago, just before high school. Even having lived here so long, “for some reason, I found those questions not so easy, because you might get nervous,” she revealed.
She reminded the group that they’ll also have to work on their writing and spelling. She still passed, later becoming a teacher in Hoboken before coming to teach in North Bergen. Today, Doukali has her masters in teaching. She is pursuing her PhD in education from New Jersey City University. She wants her success story to encourage the program participants to make their own success stories after they become citizens.
Castro, a Cuban immigrant who recently earned her citizenship through the program, said she studied for the test “every day.” The library also helped her with her English pronunciation, she said.

The forum also let the program participants ask the speakers general questions. One participant, who had been in North Bergen for five months and in the country 20 years without getting his citizenship, said his sister spurred him to study for the test. He was concerned as to whether the program will continue.
“Right now, we’re working on a grant,” Library Director Sai Rao said, “But no matter what happens to the grant, our mayor always wants the library to have programs like that, so I promise the program will continue.”
Rao first immigrated to North Bergen from India in 1988. She became the library’s assistant director in 1994, before becoming the director in 1996.

Into the real world