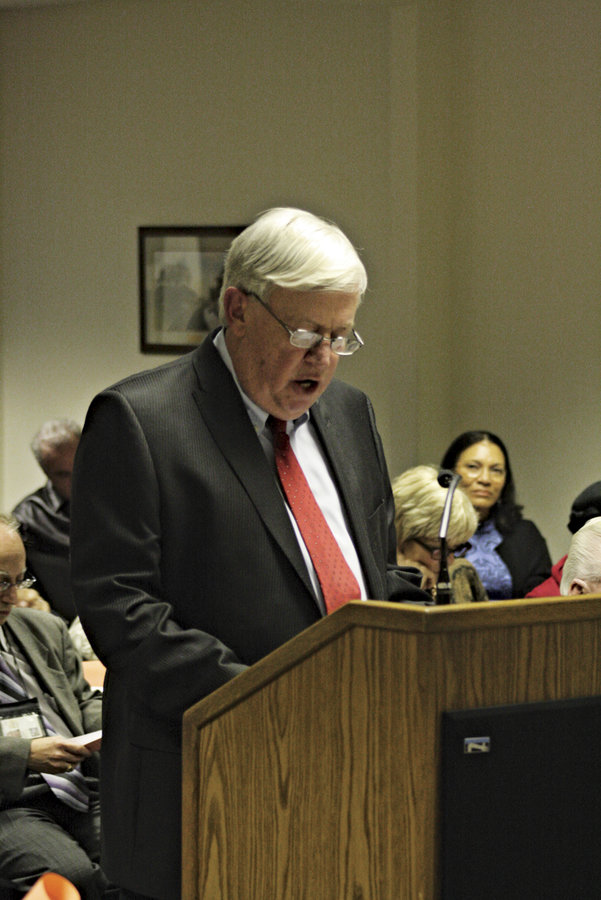 County Executive Tom DeGise’s State of the County report – a usually droll accounting of the successes of county government and projects on the table for the upcoming year — was set this year against a backdrop of political intrigue. DeGise is attempting to control a rebellion of four of the county’s mayors, who recently announced that they are seeking to unseat him in the 2019 Democratic Primary.
“Hudson County remains strong,” DeGise said in his address before the Board of Freeholders on March 8.
Some of the freeholders who listened to the speech were part of the movement against him. DeGise has made clear he will seek reelection despite the mutiny, and will run on his record.
When interviewed in early March, State Senator and Union City Mayor Brian Stack said the county needed to move in a new direction and seek new blood to reinvigorate the government. DeGise, in a separate interview, viewed the attempt to remove him as a kind of gentrification, young political leaders seeking to push out an older statesman.
His speech attempted to show how much his administration has done, and at the same time offer an olive branch to the next generation, which seems hungry to take power.
Over the last few years, county government has lost some key people, like Harold Demellier and Bill Gaughan. Even though DeGise’s speech was meant to be defiant, it also acknowledged a changing of the generational guard.
“In 2018, the leaders of both our county educational institutions will depart after decades of outstanding service: Frank Gargiulo at the Schools of Technology, and Glen Gabert at the Community College,” DeGise said. “Among our constitutional officers, we said goodbye to Barbara Netchert to welcome Junior Maldonado as County Clerk.”
He also acknowledged two new Jersey City freeholders, Joel Torres and Jerry Walker.
And, as if in response to the attempts to remove him as county executive, DeGise said, “Transition and change can be challenging…we can all take pride in the energy, professionalism and commitment our new leaders will bring to their work. The question is – what can we do to support them? I believe the best way to do that, and continue to deliver for the people of Hudson County, is for us to stay true to our commitments… Let’s work together – rookies and veterans alike in this government – to make Hudson County stronger.”

At a time when some freeholders may be plotting to vote down the county budget and further delay the development of a new court house complex, DeGise put them on notice that the county must fulfill commitments such as providing “sound, gimmick-free budgeting,” or as he put it, “meat-and-potatoes budgeting.”
“We have a major commitment to meet: the construction of a new courthouse,” he said. “It will require a major investment. Already just the acquisition of land for the courthouse has cost over $34 million. Master planning costs will be over $4 million. That master planning process, conducted over the next year, will yield a vision for the new complex and with it, a very significant price tag. Our long-patient judiciary has waited long enough. They had the right to sue the county to force our hand, but they supported rather than threatened us.”
In a challenge to those who would delay the court house project, DeGise alluded to the ARC Tunnel, a train tunnel to New York that was canceled while in early stages of construction by Gov. Christopher Christie.“Today the massive transportation headache he wouldn’t address remains, and the price to solve it has only risen,” he said.

Accomplishments and what yet needs to be accomplished

As in the past, DeGise celebrated the county’s commitment to parks and open space. The Open Space Trust Fund as well as capital spending have helped others to expand open space throughout the county.
“From Bayonne to North Bergen and from Jersey City to Harrison, we will be improving pathways, security, playground equipment and fields,” he said. “We’re also doing more to keep park visitors safe. Last year we launched our ranger program in Braddock and Lincoln Parks and this year we are beginning to upgrade our cameras already in place.”
Regarding safety, he also mentioned the purchase of a new fleet of vehicles for the Sheriff’s Department.
Alluding to his background as a teacher, he celebrated the county’s successes in education.
“This September, High Tech High School will open its new flagship campus on land adjacent to Laurel Hill Park,” he said. “This beautiful $154 million-dollar facility is really the capstone on the career of our longtime Schools of Technology Superintendent, Frank Gargiulo.”
The new campus will be named after Gargiulo, he said.
The county has also invested in its own schools such as STEM facilities at the County Prep Campus.

In a clear attempt to show that the county is as progressive as Jersey City and Union City, DeGise touted the county’s successes in providing programs.
“We continue to innovate in the name of reaching out and supporting the most vulnerable among us,” he said.
This includes things like “The Champions Awards” which honors people with disabilities and the 5K run organized by county Office of Veterans Affairs to raise awareness about Veterans Suicide.
“When it comes to reducing homelessness, we’re continuing to build with bricks and mortar, but also with smart programs,” DeGise said. “This year Hudson County non-profits will receive over $6.5 million for homeless programs, including funding for a new program at the York Street Project. This spring, we will add a new online Homelessness Resources Center, developed through a partnership with the Jersey City Office of Innovation.”
The county also has program for women and minority-owned business, and to press drug makers to be more accountable in the fight against opioid addiction.
Tying into the effort to curb gun violence, DeGise also signed an executive order ending business with Fed Ex.
“We have spent more than $60,000 with FedEx over the last three years for delivery services.” He said. “But we will stop using Fed Ex because they refuse to stop shipping guns and ammunition without responsible restrictions. They have continued to refuse even after the horrific school shooting in Parkland, Florida last month. When it comes to gun safety, it’s time for everyone to pick a side in this fight.”