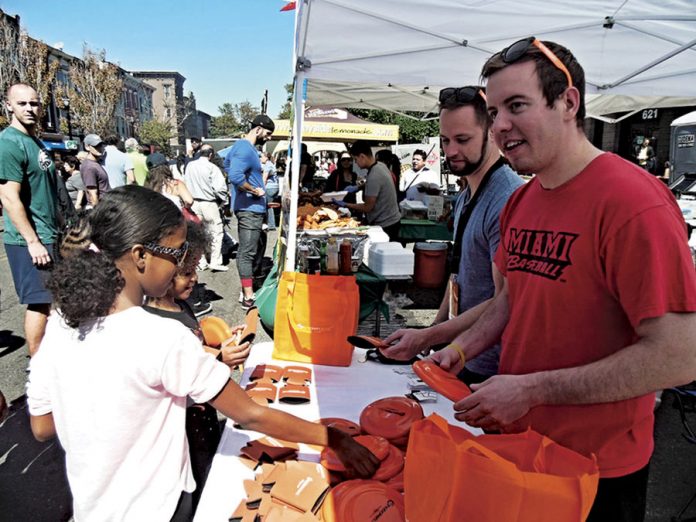 The 24th spring Hoboken Arts & Music Festival will move back to its original downtown location on Washington Street from Observer Highway to Seventh Street on Sunday, May 6, rain or shine.
Last year the festival had moved uptown due to the rehabilitation of Washington Street.
“Washington Street construction has not caused any issues in preparing for the festival,” said Spokesperson Santiago Melli-Huber, who added that equipment will be moved but the “barricades will be in place for safety in areas still under construction.”
Several blocks of downtown Washington Street have already been paved and striped, but there’s still work to be done south of Seventh Street. “But that won’t stop the fun,” Melli-Huber said. “At this time, crews are focusing on vital underground work, including water main and electrical work, which needs to be in place before more paving is done.”
The free festival is organized by Geri Fallo, the city’s administrator of cultural affairs, and will have more than 300 vendors this year, including artists, crafters, painters, photographers, local businesses, and non profits.
The festival, which is sponsored by The Hudson Reporter, Ironstate,
Suez Water, The NJ Lottery and more, could host an estimated 30,000 attendees.
“Arts and music are woven within the fabric of Hoboken’s history and culture,” said Mayor Ravi Bhalla. “This festival is a chance for our community to come together for a day of fun and celebrate this time-honored Hoboken tradition. There’s something for people of all ages to enjoy, and my family and I are really looking forward to it.”

Fine artists from all over will display and sell oil paintings, watercolors, acrylics, sculpture, mixed media, and photography at this year’s festival, so attendees can take home some of the beauty.
From crafters, attendees will be able to purchase handmade jewelry, soaps, candles, body products, wood home décor, metalwork, furniture, blown and fused glass, quilts, household items made from recycled materials, clothing, and other unique handcrafted items.
Families with small ones will be able to enjoy a variety of children’s activities. The festival will have a dedicated children’s section on Third Street in the parking lot of Capital One Bank.
“There will be rides, games, creative activities, and live performance, all geared towards children,” said Melli-Huber.
Children will be able to grab a balloon animal, have their faces painted, or create masterpieces of their own with sand art.
While listening to a variety of musical performances, festival patrons will also be able to munch on an eclectic array of international foods, from Indian, Mexican, and Caribbean cuisine to festival favorites like sausage and peppers and kettle corn.

Music for all ages

Musical performances will take place from 12 p.m. to 6 p.m. on three separate stages placed throughout Washington Street. They will be at Seventh Street, Third Street, and Observer Highway.
The musical performances span several genres including Cuban fusion, Americana, rock, and surf noir, and include past favorites and new faces.
New faces include The Dream Syndicate, who have performed all over the world. Past favorites include kids’ entertainer Ron Albanese a.k.a. Polka Dot, who is returning this year after a five-year absence.
Other performers include Nina Et Cetera, Jaime Rose, Long Neck, Richard Lloyd Group and the Alchemy Band, Beninghove’s Hangmen, Jeremy Beck and the Heavy Duty Horns, and MAXIMA ALERTA.
The Third Street Stage will see performances for children by Preschool of Rock, Kid Notes Music with Chrissy and Ralph, and Polka Dot.

Local residents can walk out their front door and meander over to the festival, which begins at 11 a.m. and ends at 6 p.m. Those coming from out of town to enjoy the community tradition and spring weather can arrive by train, bus, or ferry, as the Hoboken Terminal is located just three blocks away.
Washington Street will be closed to cars between Observer Highway and Seventh Street during the festival and during that time there will be no street parking. NJ Transit buses will operate on a detour.
For more information and a performance schedule go http://hobokennj.gov/departments/human-services/cultural-affairs/arts-music-festival/.