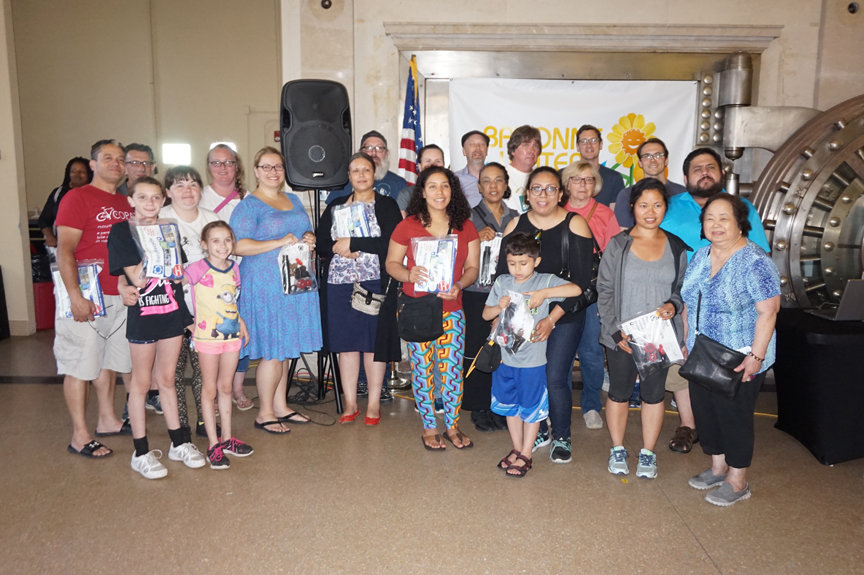 In Bayonne, the most environmentally destructive infrastructure may be its combined sewerage overflow system (CSO), which dumps millions of gallons of raw sewage annually into the waterways surrounding the peninsula when too much water pressure builds, which is usually during times of intense precipitation.
Recent centuries have seen a radical change in the way humans relate to the Earth – from symbiosis and stewardship, to domination and extraction. As a result, the air is becoming unbreathable and the water undrinkable.
Society is now reckoning with its own destructive nature. Massive shifts in policy and ideology will be required to ensure future generations’ survival, and that is finally beginning to happen, albeit incrementally, community by community.
Bayonne is one of those communities.
Bayonne residents are trying to work around the system by keeping as much water as possible from getting into the CSO in the first place. That was the goal of the first public forum held by the Bayonne Water Guardians at the Bayonne Museum on Wednesday, May 23.
The Bayonne Water Guardians is a new environmental advocacy and education campaign. Nineteen attendees each won a 55-gallon barrel for capturing rainwater to replenish their yards and gardens, clean their cars, or anything else that might otherwise require adding water to the sewerage system. The barrels were raffled off at the meeting.

Citizens to the rescue

Governments and private utility companies have deemed the problem intractable and too costly to fix, but people like Hackensack Riverkeeper Bill Sheehan and organizations like NJ Future, which co-sponsored the event, see it another way.
“I believe that we are civilized and that we have the technological ability to come up with solutions,” said Sheehan. “And I also believe that it’s not going to be as expensive as everyone tells you.”
Sheehan talked at the event about his experience addressing the water crisis. “I’ve been to meetings over the last 25 years and listening to engineers cast this pall over the entire conversation when they talk about how many billions of dollars it’s going to take to fix this problem. Well, this is a good start right here with these rain barrels.”
“One of the best things about living in Bayonne is that anywhere you are, within a 15-minute walk you’re at a waterfront,” said Cheryl Mack, who organizes the Bayonne Water Guardians. “We are a peninsula city, surrounded by water. Why not do our part to make sure that water is beautiful and clean?”

Residents with rain barrels can harvest 500 gallons of water per inch of rainfall. In Bayonne, the average annual rainfall is about 45 inches per year, which amounts to 22,442 gallons of potential water. The barrels require some assembly, but those who won a barrel say it’s worth it.
“I’m probably going to paint it and put it next to my other one,” said Ernie Rios, who uses the water for a garden in his yard on 21st Street.
His neighbor, Edward Harenza, also won a barrel. “I don’t think I’ll paint it. Maybe put some stickers on it,” he said. “I have a pretty garden with flowers and vegetables.”
The two hauled their barrels home in a pickup truck. When full, the barrels can weigh up to 500 pounds.
“Oh, it’s heavy,” said Rios. “Wherever you put it, it’s not going anywhere.”
“If you and 19 of your neighbors were all to install your rain barrels at your home, each saving 1,400 gallons a year, that would be 28,000 gallons per year saved,” said Julia Resnit, the local watershed ambassador for the Passaic Sewage Valley Commission, which oversees nine CSOs in the region and 114 CSO discharge locations. “That’s water that won’t end up in our sewage systems causing overflow.”