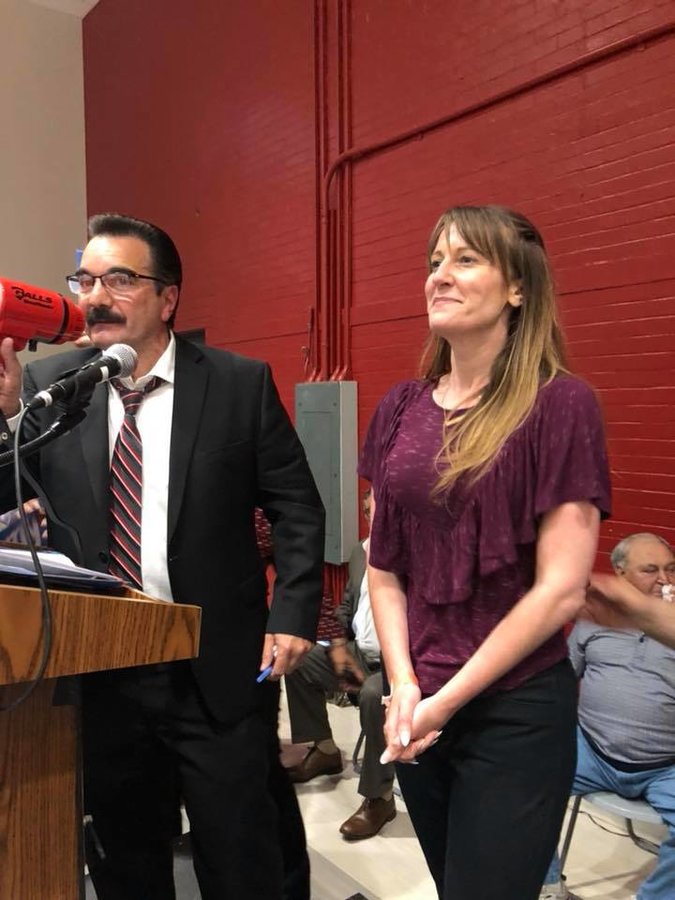 Wednesday evening, powerful state Sen. and Union City Mayor Brian Stack lost his bid to become chairman of the Hudson County Democratic Organization – a longtime political organization that helps choose candidates for local and regional office – in a committee vote held at Kearny High School on Wednesday, June 12. The winner was Amy DeGise, a member of the Jersey City school board.
The vote was contentious, as Stack and several other mayors in the county have been hoping to eventually unseat, in 2019, longtime County Executive Tom DeGise, whose job involves overseeing county agencies and facilities. DeGise is Amy DeGise’s father.
The war has pitted mayors Stack, Ravi Bhalla (of Hoboken), Steven Fulop (of Jersey City) and Felix Roque (of West New York) against allies of U.S. Rep Albio Sires, who hails from West New York, and North Bergen Mayor Nicholas Sacco.
Amy DeGise beat Stack by nearly 100 votes – a larger margin than anyone predicted.
DeGise beat Stack by a vote 452 to 360, with members of local Democratic committees in all towns voting, including some who were bused in.
“The 32nd District (which includes North Bergen, Guttenberg, and towns in West Hudson) came out big for Amy,” said Phil Swibinski of Vision Media, the political consultant firm that ran DeGise’s campaign.
DeGise, who ran a progressive campaign on issues like women’s equality, becomes the first female chair of the HCDO in history.
In February, Stack was seen as the county’s choice to replace outgoing chairman, Vincent Prieto.
But then, Stack and Jersey City Mayor Steven Fulop threw down the gauntlet at a meeting in the Coach House Diner and told Tom DeGise they would not support his reelection as county executive in 2019.
This led to a fight for control of the chair this year since the chair eventually gets to decide whom county Democrats will support in the Democratic primary in 2019 as well as candidates for many county, state and federal seats in the future.
Fulop, who may well see a significant loss of political influence as a result of this vote, seemed philosophical about the outcome.
“You win some and you lose some,” he said. “That’s the way this works.”
He added, “Truth be told, we hit our numbers in every city including Jersey City, but we underestimated the turnout from Bayonne by 40 votes and we never thought it possible they would get 100 percent turnout from all of their towns.”
For a longer version of this story, see your local weekly print edition over the weekend, or come back to hudsonreporter.com starting Sunday.