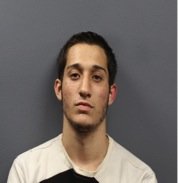 SECAUCUS–Local police have arrested a man they allege was trying to break into a home, according to a department press release. He allegedly possessed an assault weapon.
On June 28, at 5:02 p.m., a resident on Clarendon Street’s 300 block notified cops that a family member was attempting forced entry into his home. Officers detained Adam Rodriguez, 20, from Nashville, Tenn., upon arrival.
While inspecting the residence’s exterior, police noticed an abandoned backpack. It featured a Tech 9 semi-automatic firearm, and a 20 round large capacity magazine. They claimed that it belonged to Rodriguez. He was also allegedly found to be possessing suspected Xanax. No illegal entry was made into the home, police said.
Rodriguez was arrested and charged with possession of CDS, unlawful possession of an assault firearm, and possession of a large capacity magazine.