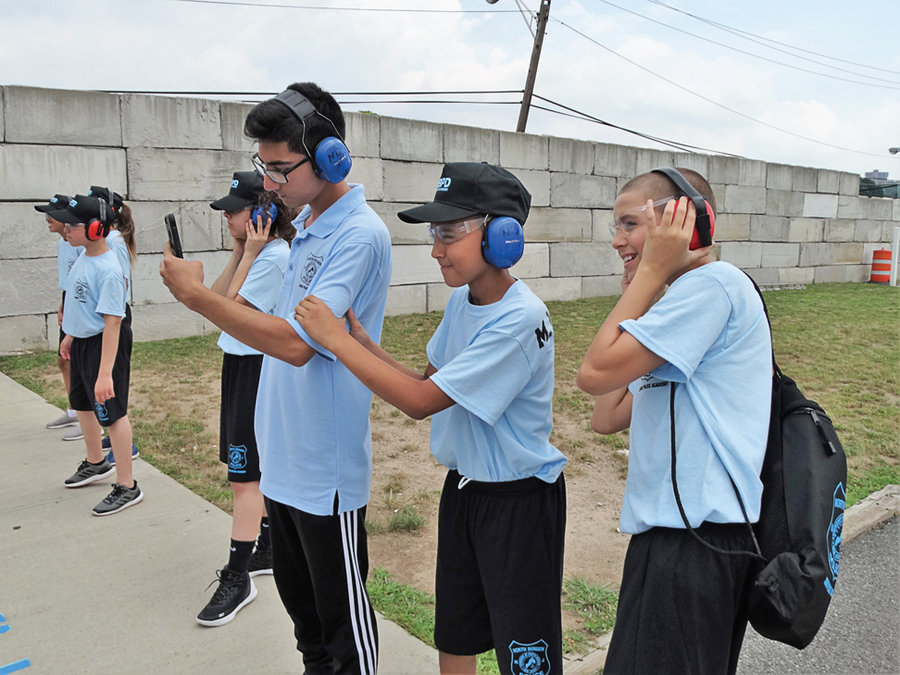 The last flag football game of the season ended in a 21-21 tie on Wednesday, July 18. Members of all the township flag football teams participated in the game, which was followed by an awards ceremony.
Mayor Nicholas Sacco and Commissioners Hugo Cabrera and Julio Marenco presented each player with a plaque and took individual and group pictures with the players. Afterwards everyone was treated to hot dogs and ice cream in the newly refurbished Pop Warner building.
Flag football was established by the township’s Recreation Department several years ago as a way to introduce younger kids to the fundamentals of football in a safe and fun manner. The program continues to grow in popularity each year, with more than 50 kids ages 5 to 7 participating this year. Numerous parents served as coaches to the teams.

Fridays throughout the summer are kids’ days from the North Bergen Free Public Library, with events every week through Aug. 17.
On Friday, July 20, the library held a “Bubble Show” at the main library and “Digging for Dinosaurs” at the Kennedy Branch, for kids ages 6 to 10.
Friday, July 27 will see the “Water Olympics” from 11 a.m. to 1 p.m. in Braddock Park. Don’t miss this chance to throw water balloons at North Bergen cops.
Other events include a Dissection Lab, Unique Creatures, Super Science for Kids, Curly the Caterpillar, and more. There’s even a “Night at the Library” – a sleepover on Friday night, Aug. 3, complete with games, snacks, and karaoke.
For more information, visit www.nbpl.org or call (201) 869-4715. The main library is located at 8411 Bergenline Ave. The Kennedy Branch is located at 2123 Kennedy Blvd.

North Bergen’s annual Junior Police Academy took place last week, with a group of local students going through a crash course in law enforcement. On Tuesday, July 17, the kids, all entering the seventh or eighth grade, visited the North Bergen Police Firing Range to learn about weaponry and view a live fire demonstration.
The Junior Police Academy is an intensive one-week course designed to operate like an actual police academy. The goal is to educate select North Bergen students in various police procedures and give them a comprehensive understanding of what it takes to succeed in the profession of law enforcement.
Among the many activities the cadets participated in included visits to the NBPD Headquarters, North Bergen Municipal Court, Hudson County Correctional Center in Kearny, and the 9/11 Memorial and Museum in Manhattan. They experienced daily roll call and physical training, and learned defensive tactics, team building, the history of law enforcement, and more.
The academy continued on July 19, when the kids visited the Hudson County Center in Kearny.
From there the 25 cadets traveled to Lincoln School Annex for the remainder of the afternoon, to learn about various aspects of criminology.
First they met with Nico and Tahoo, a pair of highly-trained police dogs. K-9 Officers Bart Lore and Joe Barone from the Hudson County Sheriff’s Office demonstrated how their K-9 partners seek out drugs and bombs, and respond dramatically to specific commands to protect the officers.
Then Det. Marcelo Pirez gave a talk about polygraphs, providing a demonstration using one of the cadets. Given their newfound knowledge, the cadet’s classmates were able to accurately determine when she was lying.
Finally, Det. Peter Insetta of the North Bergen Police Department provided an interactive demonstration of fingerprinting techniques. The academy concluded on Friday, July 20 with a visit to the North Bergen pool and a barbecue for the cadets.