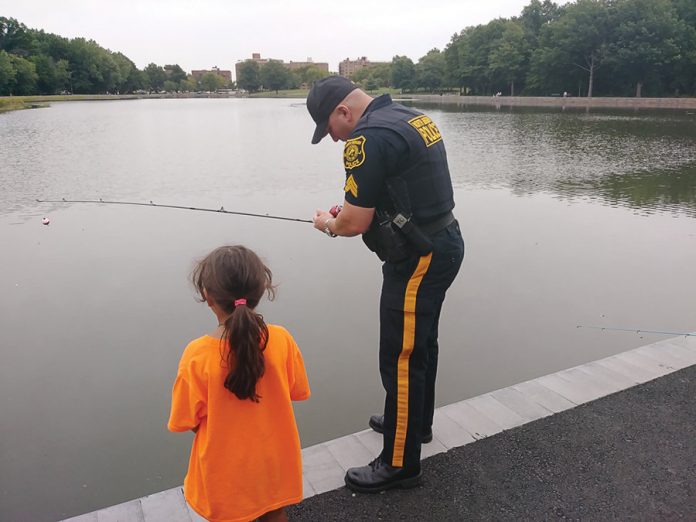 Twelve-year-old Laaren doesn’t think the fish at Woodcliffe Lake like her. She spent a long time fishing at the first annual Cops n’ Bobbers fishing derby there on July 30, but none of them bit.
She said the fish down at Long Beach Island like her better, because “I’m a regular down there.” But in North Bergen, “They swim away from me. The local fish don’t like me.”
She was one of 600 kids from the North Bergen Summer Recreation program who participated in the derby that day. The event was a collaborative effort between the North Bergen Police and Recreation Departments.
Officers Nader Awadullah and William Brown, who surprised kids in the local elementary schools with ice cream trucks in June, began planning for the event with rec officials in May. They first heard of the idea from the Garfield Police Department, which they then brought to Chief Robert Dowd, who wanted a derby for local kids too.
Secaucus also holds fishing derbies for their kids.
The police purchased 70 rods and the rec department bought another 50. After Awadullah reached out to the federal U.S. Fish and Wildlife Service for derby assistance, they donated 50 more to the cause.
Kids aged 7-11 participated.
Representatives from the federal agency were on hand to help kids with their fishing technique and to free the numerous turtles that kids accidentally hooked throughout the day. Many kids ended up catching red-ear slider turtles left in the lake, often by people who don’t want them anymore.
Lia McLaughlin, a deputy refugee manager for the Great Swamp National Wild Refuge, said that Cops n’ Bobbers had a lot more kids than other fishing events she’d been to.
The Wildlife Service co-hosts fishing events when available. They provided tackle, bobbers, weights, and hooks for the derby. Currently, they cover New Jersey, New York, and Pennsylvania, helping urban youth interact with flora.

Resident Shaunny, 11, was hoping to not just catch a catfish in the lake, but a shark, if possible. She often fishes with her uncle at Jersey Shore.
“I’ve already caught two fish,” said Jonathan, 12. “I don’t know which ones, but I think one was a sunny fish.”
He said he used to fish often with his grandfather.
Though the derby only occupied one side of the lake, future plans call for a bigger derby, in time.
“The commissioner and the mayor’s goal is, we keep on buying so many fishing poles each year, and we put them away,” Brown said. “Then we have one big day — maybe it’s our end-of-the-year party — and have them fish for 2-3 hours.”
“When they came up with it, we thought it was a great idea,” said Recreation Commissioner Hugo Cabrera. “It’s something new for the children. We’re introducing fishing to them, and this might be something they enjoy in the future.”