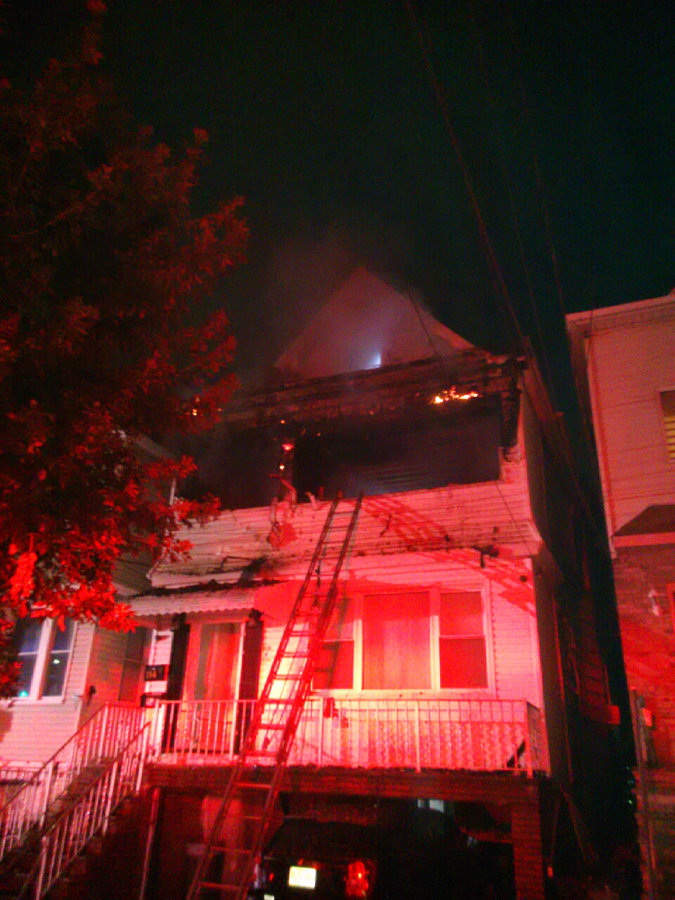 Eight people displaced in second-story fire on Avenue B

A two-alarm fire on Avenue B displaced eight people on Monday, Aug. 13. They are now being assisted by the Red Cross and family and friends, according to Bayonne Fire Chief Keith Weaver.
The second-story fire, which was extinguished in the early morning hours of Aug. 14, was called in at around 11:30 p.m. the evening before, at the corner of 47th Street and Avenue B.
Firefighters used two hose lines to contain the fire. To extinguish the remaining hotspots, firefighters opened the ceiling and walls of the building on the second floor and attic. The fire was placed under control just before 1 a.m.
One firefighter suffered a minor injury and was treated at the scene. The cause of the fire remains under investigation but is not considered suspicious in nature, according to Weaver.

At a council meeting on Aug. 15, the Bayonne City Council issued a PILOT agreement (payment in lieu of taxes) for a North Street developer who plans to build two 22-story towers near the Eighth Street light rail station.
The developer will pay the city of Bayonne $120 million over 30 years, with 10 percent, or $1.2 million, going to the Bayonne Board of Education. The council passed an ordinance in 2017 that allocated 10 percent of PILOT revenue to the school district.
The two towers, which are planned to have 170 residential units each, will be the tallest buildings in the city. They are expected to be completed by the end of 2019 or the beginning of 2020.

When Sonia Romero, a nurse living in Bayonne,came across an unfamiliar elderly man sitting on a stoop of her neighbor’s home on a sweltering August day, she knew something was off. The man did not have any water and looked “confused,” according to the Bayonne Office of Emergency Management.
Romero soon learned that he was from Union City, had no keys, no wallet, and was unaware of where he was.
Romero asked her son to dial 911, as she was taking care of her granddaughter at the time. Her son brought the man water and waited for emergency responders to arrive. Responders united the man with his family in Union City.
“I think many people may have ignored this poor man, but I wanted this story to get out so that that doesn’t happen in Bayonne,” Romero told the Bayonne Department of Emergency Management. “People need to look out for each other and report anything that doesn’t seem right. Everyone should be aware of their surroundings.”

New Jersey’s gas tax is likely to be raised by at least a few pennies later this year thanks to a 2016 law, according to NJ Spotlight. The state’s top budget officials met on Wednesday to determine whether the gas tax, at its current rate, was producing enough revenue to avoid an increase.
Treasurer Elizabeth Maher Muoio told NJ Spotlight in an interview that a decision is still a couple of weeks away as some final revenue figures are still being analyzed. The latest state revenue figures suggest a modest gas-tax increase will be needed to comply with the terms of the 2016 law, which is intended to protect the integrity of the state’s Transportation Trust Fund. Any increase would go into effect Oct. 1.

Jersey City has been unable to meet the five-day required period to verify signatures submitted by those seeking to force a public vote on whether or not to move the Katyn Memorial from Exchange Place, so the city has requested and won an extension.
On Aug. 6, Judge Mary K. Costello gave the city clerk’s office until Aug. 13 to decide whether the resubmitted petition has enough signatures to require the question to be put on the ballot in November.
The City Council adopted an ordinance in June that moves the statue from its current location to a new location. Using a provision in state law, opponents gathered signatures to force the council to withdraw the ordinance or send the question to the public ballot.
In July, the city clerk rejected most of the signatures originally submitted, saying they failed to come up with 6,714 valid signatures from Jersey City voters.
The petitioners were allowed time to correct the deficiency and submitted an additional 5,000 signatures which the clerk has to check.
The court also said the matter could come up before the council at its September meeting, rather than on Aug. 13 as would have been required under the original state mandate.

Hoboken, Bayonne, Union City, North Bergen and Hudson County will all get a piece of the $28 million in newly-announced grants from the U.S. Department of Housing and Urban Development’s (HUD) Community Planning and Development (CPD) Program to revitalize struggling communities, according to U.S. Senators Robert Menendez and Cory Booker.
“Revitalizing New Jersey’s struggling communities takes a comprehensive approach that recognizes the importance of safe, affordable housing, economic opportunity and the services individuals and families need to overcome obstacles and secure their future,” said Sen. Menendez, the ranking member of the Senate Subcommittee on Housing, Transportation, and Community Development. “That’s why I’ve always fought for the resources our local communities need to transform their visions into reality.”
The CPD Program consists of five specific grant opportunities: the Community Development Block (CDBG) Grant, the Emergency Solutions Grant (ESG), the HOME Investment Partnership (HOME), the Housing Opportunities for Persons with AIDS (HOPWA) program, and the Housing Trust Fund (HTF).
Bayonne will receive $1,532,909; Hoboken, $1,075,286; North Bergen, $636,830; Union City, $1,003,951, while Hudson County received several grants totaling about $5 million.

The State Supreme Court ruled Monday that the public has no right under state law to review police dashcam videos. The ruling means the public has no right to use the videos to determine if a police officer acted properly during a high-speed chase or was justified in using non-lethal force to subdue a suspect.
The court ruled 4-4 that the videos are related to criminal investigations and therefore not subject to the state’s open public records law.

Health care services focused on LGBTQ people are growing in New Jersey, with new clinics and support groups serving the community. And a growing number of hospitals are adopting policies intended to promote equitable and inclusive care. State health officials and some professional organizations are also responding to the need for more extensive training for health care providers to improve the quality of c1are for lesbian, gay, bisexual, transgender and questioning patients. Meanwhile in Bayonne, City Hall is raising a LGBTQ flag for the first time.

A task force’s recommendation that the state cut back on public pensions is being met with anger from members of New Jersey’s unions that represent public employees.
The task force recommended that teachers and state workers with less than five years of service, and all new workers, be switched from a defined benefit to a defined contribution plan. That means a 401(k) type plan or possibly a hybrid of the two.