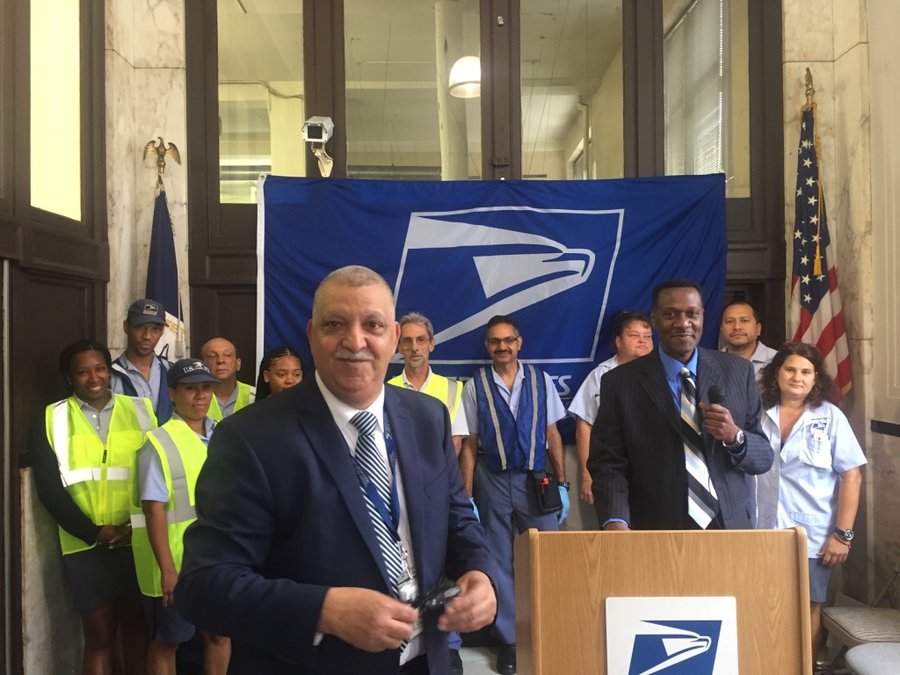 Emad Attaalla is the new postmaster for Hoboken.
×

Emad Attaalla is the new postmaster for Hoboken.

Hoboken’s newest postmaster, Emad Attaalla, understands why his job is important. “A single mother who doesn’t have any money with a brother in California could have her brother put a money order in a small envelope and have it delivered for the cost of a 50 cent postage stamp,” said Attaalla. “If we misdeliver, If we don’t deliver that letter on time, then she doesn’t have enough money to feed her kids.”
Now that Attaalla was installed as Hoboken’s postmaster general on Tuesday, Aug. 21, he says his main focus will be customer service, and ensuring packages and mail are delivered accurately and on time.

Attaalla, who joined the U.S. Postal Service 23 years ago, became Hoboken’s fifth postmaster at a ceremony at the Frank Sinatra Post Office at 89 River St.
Attaalla replaces Arthur Tate, who became postmaster in 2000 and retired last year.
Attaalla has worked for the US Postal Service for 23 years. During that time he has held many positions including mail carrier, supervisor, and instructor. For the last four years he has been a postmaster for Union City.
He joined the postal service at the suggestion of his wife.
“I came home from work one day and found an application for USPS on the kitchen table that my wife had brought home, and suggested I might like it,” said Attaalla. “I filled it out and brought it to Journal Square the next day.”
Attaalla said since starting 23 years ago, he has worked in many towns in northern New Jersey for the United States Postal Service, going wherever he was needed.
During his career he graduated from New Jersey City University with a degree in business management so that he could continue to grow within the postal service.
Attaalla was appointed to the position of postmaster of Hoboken in March but was sworn in this past August.
He said that although he is a Bergen County resident and lives in North Arlington, he has roots in Jersey City and Hoboken.
Attaalla is a deacon of a Jersey City Coptic church. And he and his adult children often go out for meals in Hoboken and enjoy the view.
“Hoboken is a busy city filled with great citizens and residents and businesses,” said Attaalla.

Focus on the customer

“We do such an important job,” said Attaalla. “Our carriers are part of your family and some have been with people from childhood to adulthood. We’ve delivered some of the most important news people receive, from your high school acceptance letter through your college acceptance letters to a letter from a soldier overseas to his mother.”
He said that neither he nor his coworkers take the job lightly, as “every single piece of mail we deliver is important.”
He noted, “Nobody is perfect. We make mistakes but I will make sure they don’t happen as often. My focus now is improving the new people who don’t yet know what’s needed, and employee training. I love to teach people and help them grow.”
He said no matter the problem or complaint, he will follow up with each individual personally to ensure that it is resolved.
He said, “I want every resident to know me by name, and to know my face when I am walking in the street.”
He said he has begun visiting businesses in town to introduce himself and talk about how the Hoboken post office can help them.