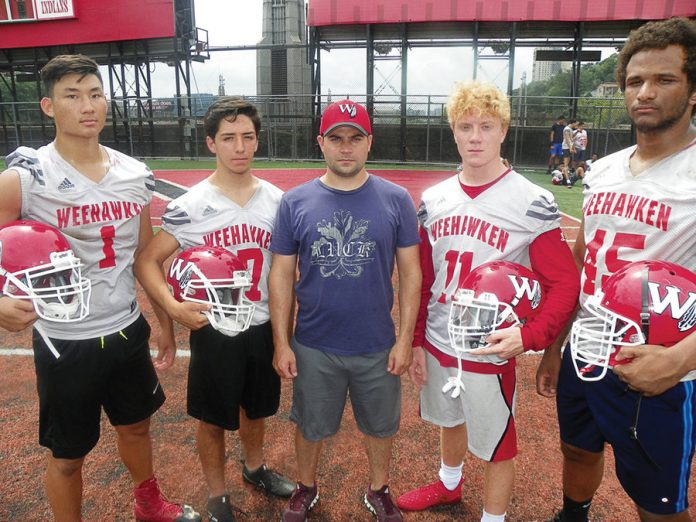 Nick DeStefano didn’t want to focus on all the distractions that might have hurt the Weehawken High School football program that he inherited last year.
There was a lot of turmoil and strife, partially caused by a sudden coaching change. There was a serious drop in participation. Rumors floated about that the school was just about to drop football or join a co-operative program, like the school already has with Bogota for wrestling.
So when DeStefano took over the dual duties of head football coach and athletic director at the school, it wasn’t an instant success.
“We always talked about the positive,” DeStefano said. “We really didn’t have senior leadership last year and that hurt us a little. But most of our team was pretty young.”
So the Indians went through a 2-6 season that was filled with its share of growing pains.
“The majority of that team is returning this season,” DeStefano said. “So I think we’ll see an improvement in our performance this year. We’re bigger, stronger and older.”
One of the key returnees is senior quarterback Jimmy Lopez (5-9, 165), who earned Hudson Reporter Athlete of the Week honors in November last season after a 34-12 win over North Arlington.
Lopez was the team’s leading rusher last season, collecting nearly 700 yards on the ground and scoring nine touchdowns.
“I think he’s still developing as a quarterback,” DeStefano said of Lopez. “He completed 51 percent of his passes last year. I think he gained a lot of faith in his teammates and they have faith in him. I think he’s way more comfortable in the position. When he gets out of the pocket, he can do a lot of things. He’s way more dangerous.”
Lopez completed five passes for 65 yards and rushed for 36 yards in the Indians’ season opening thrilling 40-36 win over Wallington to begin the 2018 season August 30 at Wallington. The Panthers have traditionally been one of the stronger programs in southern Bergen County, a perennial playoff team. The Panthers were 7-3 last year and defeated Park Ridge in the opening round of the North Jersey Section 1, Group I playoffs.
So Lopez led the Indians to perhaps their biggest victory in five years.
“He can’t do it all on his own,” DeStefano said. “But he gives us a lot of options. Our best players never come off the field, so Jimmy plays linebacker for us. He has great ability to make tackles in the open field.”
Another key contributor is senior running back Rex Fukuda (6-2, 220), who had a game to remember for the rest of his life in the win over Wallington.
Fukuda rushed for 176 yards on 29 carries and scored four touchdowns in the win. It was clearly the best offensive performance by any Hudson County football player in the first week of the new season.
“Rex is a downhill runner,” DeStefano said. “He doesn’t make a lot of cuts. He gets a lot of yards after contact and keeps running hard. He runs straight ahead. We didn’t have any of that last year.”
Fukuda’s power running style obviously made a huge impact on the Indians and it showed on the scoreboard and in the final score.
Lopez and Fukuda are not the lone Indian standouts.
Senior Jaden Rodriguez (5-10, 180) is a fine receiver in the Indians’ spread formation, but he can also play a bit at running back, where he gained over 400 yards rushing last year.
“He can play multiple positions, which really helps us,” DeStefano said. “We try to use his receiving skills mostly, but he can run the ball as well.”
Junior Kareem Straughn (6-3, 200), junior Chaz White (5-11, 180) and sophomore Andrew Ortiz (6-3, 175) comprise the rest of the receiving corps.
The Indians’ offensive line isn’t blessed with an abundance of size.
“We have smaller, quick guys on the line,” DeStefano said.
Leading the way on the line is three-year starter Michael Fitzgerald (5-10, 225), who returns to his spot at tackle, where he’s joined by promising sophomore J.J. Santos (6-2, 190).
Senior Cesar Cordero (6-3, 275) returns to his starting slot at guard and provides the most amount of size along the line. The other guard is sophomore Giuseppe Salandra (5-8, 225).
The center is junior Andres Gonzalez (5-10, 245).
The Indians use a 4-4 defensive formation, with Fitzgerald and Rodriguez at defensive end and Cordero and Santos at defensive tackle.
The outside linebackers are Lopez and White. Lopez moves up to linebacker from his position at safety last year.
The inside linebackers are Fukuda and junior Jonathan Ortega (5-10, 180).
The secondary features sophomore Derek Mejia (5-9, 170), along with a pair of promising freshmen in Favin Wells (5-9, 160) and Evin Serrano (5-11, 165) at cornerback and safety respectively.
The Indians were scheduled to face Bogota and Wood-Ridge in successive weeks after the big season opening win.
“I think we’re definitely going to be better this year than we were last year,” DeStefano said. “I think we can go as long as we stay healthy. We’re going to throw the ball a lot more this year and it doesn’t hurt having someone back there who has done it before.”
And now, you add a running back with a brilliant performance under his belt and you have the makings of some promise and potential in Weehawken.

Jim Hague can be reached at OGSMAR@aol.com. You can also read Jim’s blog at www.jimhaguesports.blogspot.com.