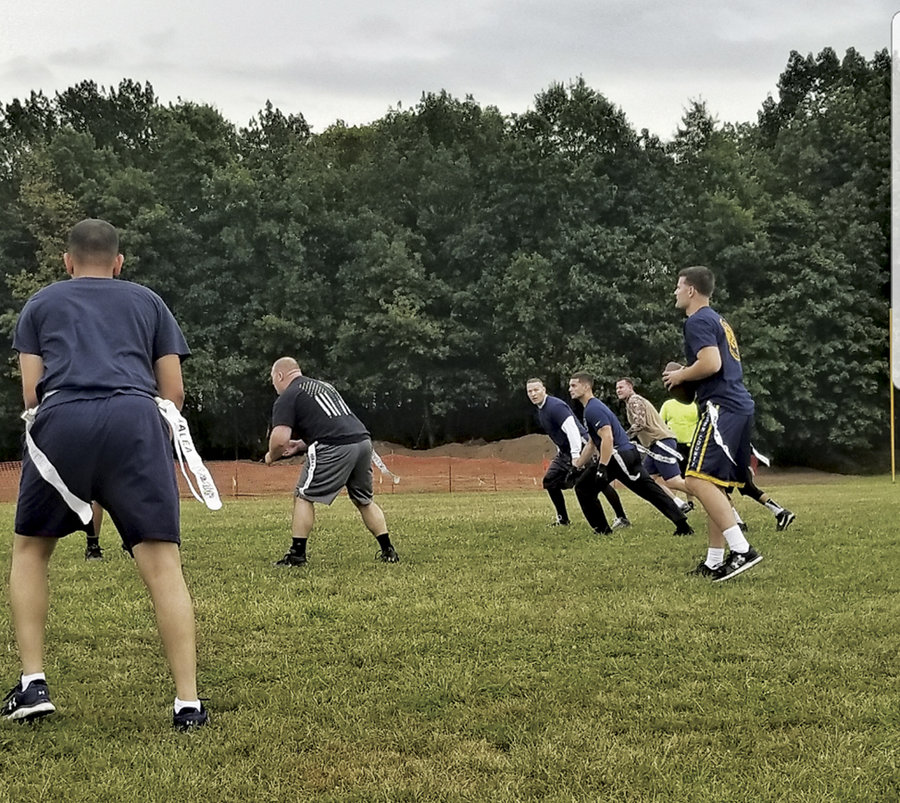 A story on the front page of the September 13 issue of the Bayonne Community News erroneously reported that parking in the garage at RWJ Barnabas Health is free to the public. It is available for public use but not free. We sincerely regret the error.

A new political group called the Bayonne Center for Progress sent a letter to the Bayonne City Council requesting the city adopt pay-to-play laws.
“Pay-to-play legislation will help ensure that tax dollars are spent wisely and without
strings or quid pro quo expectations,” wrote Michael T. Embrich, the founder of the group in a letter to the council.“Additionally, it will allow Bayonne businesses to get a fair shot at city contracts, empower the council to act independently and equitably in awarding city contracts, and restore citizens’ faith in the fair and open bidding process.”

A 5-week-old kitten trapped between two concrete barricades on the Bayonne Bridge was rescued by a Port Authority police officer on September 5, according to the NY Daily News.
Officer Ninzio DelPriore was patrolling the Bayonne Bridgewhen he was flagged down by a construction worker who heard distressed meows but could not see where the sounds were coming from.
The kitten, who was later named Bridgette, was given to the Perth Amboy Animal Shelter. The kitten is reportedly in good health and is expected to be put up for adoption in the next few weeks, once she reaches five pounds.

Bayonne police arrested a teenager on 53rd Street after responding to a complaint about a group of teenagers sitting on a stoop, according to police. An officer saw a silver object in a 17-year-old’s hand and asked to see what it was, but the teenager allegedly concealed the object, which turned out to be a 9-inch switchblade. The officers arrested the teenager, who allegedly punched an officer while being detained.

The Hudson County Sheriff’s Office hosted a community policing event at Hudson County Park on Saturday, September 8. More than 150 people attended the event, during which the officers played a game of football with residents.
“When you combine officers that care for the people they protect alongside the community and local business owners, there’s no stopping us,” said Sheriff Officer Corrado DiVincenzo, who organized the event.“It was a fantastic event full of games, giveaways, free food for the community, sports, face-painting, balloon-making, friendly competition, and school bags were given away along with a bunch of other prizes.”
“Thank you to Saks Off Broadway, Pizza Masters, Walgreens, Walmart, Blimpie on25th, Stopand Shop, Bayonne Pretzel Factory, BCB Bank for their $1,000 donation, Sheriff Frank Schillari for his donation, the Muslim Council, and last but certainly not least Khalid Aly, owner of Judicke’s Bakery for donating all of the burgers, hotdogs, chicken, buns, desserts, and utensils,” DiVincenzo said.“Big thanks to all the volunteers from the HCSO family that helped organize and execute this event. It certainly wasn’t a one-man job and wouldn’t have been successful without everyone’s collaboration.”

Tragedy was averted on the evening of Wednesday, September 12, when a Bayonne police officer fired shots and missed a psychologically distressed 25-year-old man who allegedly pointed a fake gun at him on Avenue F while responding to a report of an “emotionally disturbed person,” according to the Hudson County Prosecutor’s Office. The man was charged with aggravated assault on a law enforcement officer and possession of an imitation firearm. The incident is in the early stages of investigation by the Office of the Hudson County Prosecutor.

What do the “Brady Bunch,” “The Sopranos,” and “Real Housewives of New York” have in common?
Stars from those shows as well as a host of other movie industry professionals are expected to attend the opening festivities of the Golden Door International Film Festival in Jersey City on Sept. 20.
In its eighth year, the festival will screen 204 films at various venues around Jersey City over a four-day period, starting at a red carpet reception on Sept. 20 at the Loew’s Landmark Theatre in Journal Square as well as a closing event and awards ceremony on Sept. 23.
Golden Door will kick off the opening ceremonies with two films. “Undiscovered Country” is a feature film by a Hoboken filmmaker dealing with a young woman and her mother’s secret past. In “Nightingale,” a man puts on a one-man show in the midst of a nuclear holocaust.
The opening event may feature some surprise guests: expected to attend are a who’s-who of well-known TV and movie personalities, as well as local stars, including Chuck Wepner, a fighter known as the “Bayonne Bleeder.” Wepner was recently featured in a film about how the original “Rocky” movie was based on his fight with Muhammad Ali.

Cost of individual health insurance in NJ to drop

New Jerseyans who buy health insurance on the individual market will see a drop in price of more than 9 percent on average next year, according to NJ Spotlight. The decrease is due largely to recent changes in state law intended to stabilize the state’s insurance system and federal approval of another state-based program. Nearly 300,000 New Jerseyans buy this type of insurance on the federal Affordable Care Act website healthcare.gov, or directly from insurance companies that sell policies on the state’s individual market.

Gamblers in New Jersey wagered more than $95 million on sporting events in August, according to The Associated Press. That was more than twice the amount bet on sporting events in July, the first full month that gambling on sports was permitted in the state. The Meadowlands Racetrack in East Rutherford led the market with just over $3 million in sports betting revenue in August.

State Board of Ed tables vote on cutting back PARCC

The state Board of Education, which had been expected to reduce reliance on the PARCC standardized tests in schools, instead moved Wednesday to table the matter, according to NJ Spotlight. Board President Arcelio Aponte and Education Commissioner Lamont Repolletto said the issue needed more discussion, and the matter was postponed until October. NJ Gov. Phil Murphy promised in his campaign that he would eliminate the PARCC tests.

Special interest spending, mainly fueled by pro-Democratic unions, is flowing largely unchecked in New Jersey, according to a new analysis, The Record reported. The top 25 “pressure” groups spent more than $74 million last year trying to influence elections and policy, an analysis released Wednesday by the Election Law Enforcement Commission. The findings draw attention to the lack of action by lawmakers to strengthen transparency in lobbying and elections, the commission says.

NJ Transit does not have a single electric bus in its fleet of 2,200 vehicles, NJ Spotlight reports. Now environmental and climate groups, noting the emissions from diesel buses, are urging the agency to convert to cleaner electric buses. Nationwide only 0.2 percent of transit buses are all electric, according to a study by the Frontier Group.

NJ to investigate claims of sexual abuse by priests

New Jersey is creating a special task force to investigate allegations of sexual abuse by priests, and any efforts the Catholic Church may have made to cover up such abuse, NJ.com reports. Attorney General Gurbir Grewal said he was appointing Robert Laurino, a former acting Essex County prosecutor, to lead the task force. It will have subpoena power through a grand jury and will be able to compel testimony and demand the production of documents. The action comes in the wake of Pennsylvania’s inquiry, which found sex abuse in the Catholic Church to be more widespread than originally believed. New York State has announced a similar investigation.

Monmouth U. suspends all fraternities, sororities

Monmouth University has suspended all fraternities and sororities indefinitely. In a letter Thursday morning to students and staff, President Grey J. Dimenna noted “serious conduct violations that have occurred within the community including hazing, alcohol and drug use, and lack of academic focus.” Earlier this year the Greek Senate was asked to draft a plan to improve the culture of the fraternity and sorority system. Dimenna said the plan fell short of expectations.