Bergen Point does it again 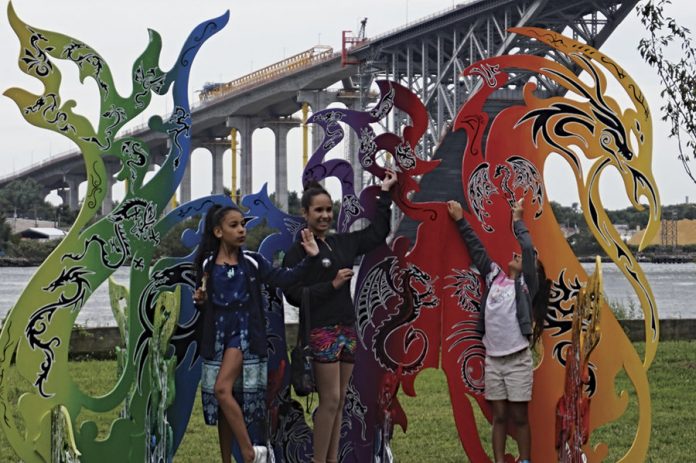 Fall is festival season in Bayonne. The second annual Bridge Arts Festival took place on Saturday, September 8, which will be followed by the Bergen Point Fall Festival on October 13. The Bridge Arts Festival, as its name suggests, places a strong emphasis on the arts. In Dennis Collins Park, against the backdrop of the Bayonne Bridge, for which the festival is named, musicians, dancers, and artists showcased their talents. Attendees also enjoyed food trucks, vendors, and a beer garden.
“I love how the festival has all cultures come together,” said Ashwin Kumar, 28, wearing red garments with a gold stripe down the middle and a gold sash around his waist. He performed his traditional Indian Bharateanatyam dance at the dance pavilion, and even taught the crowd a few steps. “The dance is to celebrate and bring joy to people,” Kumar said. “I’ve been doing it all life.”
“The location is wonderful,” said Arianna Pineiro, who danced along to the performances, which included shows by students at Dance With Me Studios and the Jersey City Ballroom Dancers. “The stage facilitates a lot of great performances and fosters a great sense of community and diversity.”

Musicians included Alicia Olatuja, a jazz and R&B vocalist from Jersey City who spent much of the last decade performing with the Brooklyn-based Tabernacle Choir and was a featured soloist at former President Barack Obama’s second inauguration. Also on hand were Anthony Fuscaldo, a guitarist from Bayonne; Conundrum, a hip-hop band with two members from Bayonne and one from Jersey City; and Los Hacheros, a Latin music band that was featured on a NPR Tiny Desk concert.
While adults enjoyed the beer garden, kids enjoyed arts and crafts by the Craft Fox and tossing bean bags in corn holes set up by BCB Bank. Artists from across the region set up shop to showcase and sell their art, including Bayonne’s Nupur Nishith, as well as local shops like Manifest Comics.
Festival organizers, Cheryl and Christopher Mack, who run the Bridge Art Gallery on Broadway in Bergen Point, said their months of planning paid off.
“We added a little more music and dance performers and vendors this time, and the storybook theater time was a huge hit with families with young children,” said Cheryl Mack. “We were thrilled with the turnout even though it was an overcast day, and everyone had a great time. We took the success of last year and made this one bigger and better.”

Appointments and other items make up Jersey City Council meeting