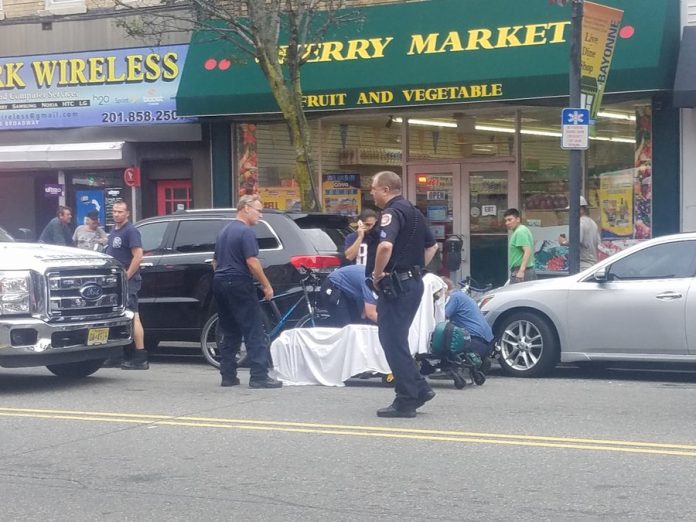 On September 12, Carlos Pimetel and his mother were riding south on Broadway to check out a store in Bergen Point when a driver opened a car door while the two were approaching. His mother was “doored” and broke her leg.
“It’s ironic that I’m usually thinking about my safety, but this time it was my mom who was hurt,” said Pimetel, who commutes on his bicycle regularly to Brooklyn from Bayonne. “I think bike lanes would help a lot and make it where everyone can see [cyclists] and know where they are supposed to be,” said Pimetel. “It will heighten awareness. That would be a strong step.”
Bayonne, a city largely built for motorists, partnered with P3 Global Management in 2017 to install bike shares throughout the city, the same company that owns the bike share system in other cities in Hudson County. Jersey City and Hoboken have made roads safer for cyclists by investing in what urbanists call “complete streets,” which are designed to create safe streets for everyone who uses them, including pedestrians, cyclists, motorists, and transit riders of all ages and abilities. Such things as bike lanes, improved crosswalks, and pedestrian bridges are designed to make it easy to cross streets, walk to shops, and cycle to work.
Bayonne cyclists are still waiting for “complete streets.” Despite the installation of bike shares, the city still has no bike lanes. That’s a problem for cyclists sharing the road with vehicles 250 times their size that travel much faster.
In late August, a 77-year-old cyclist died on Avenue C, one of the widest roads in the city. That’s a somewhat rare case because cycling deaths account for only 2.2 percent of all traffic deaths nationwide, according to the National Highway Traffic Safety Administration.
“I believe that Bayonne would benefit from having bicycle lanes,” said Rey Torres, a frequent Bayonne cyclist. “However, we should take into consideration that a lot of the city streets would need to be fixed such as potholes all around town.” He continued, “Now the city has the bike share program. Before this project was finished, bike lanes should have been made.”

A lower reliance on cars is a growing trend in cities. According to U.S. Census data, 23.1 percent of households in Bayonne have no vehicles, a much lower percentage than Jersey City (38.6) and Hoboken (35.1).
“Cycling infrastructure is important, especially where there is a wide enough lane to support a cycling lane,” said Jay DiDomenico, President of the Hudson County Transportation Management Association. He emphasizes the need for cycling infrastructure, but said that cities often do not prioritize budgeting for the expense of creating separate lanes. Bayonne’s Master Plan calls for cycling infrastructure, but nothing has been installed yet.
DiDomenico also advocates for education both for cyclists and motorists. The two commuter groups often lack understanding of one another’s behavior and are unable to predict what the other might do.
“When you are going to drive a car, you need to take a class and be tested, but you’re not educated in sharing the road with cyclists,” said DiDomenico. “Cyclists are responsible, too. A bicycle is a vehicle. Once you’re out on the street, not only can you get into an accident and get injured, but you can cause an accident or injury to others. Education for both the motorist and the cyclist is needed.”