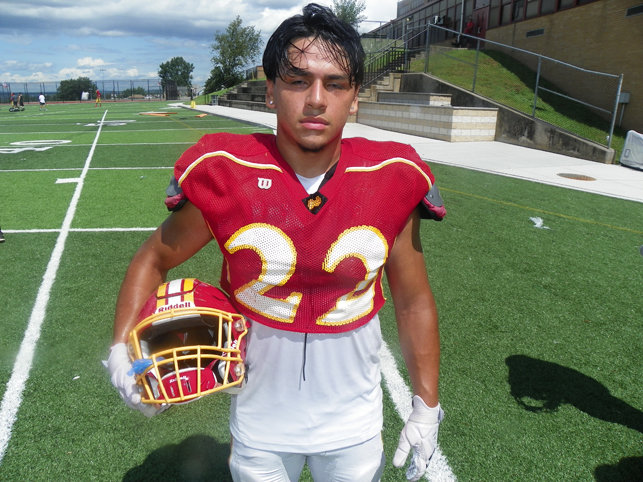 Like the true team player that he is, Christian Angulo just wanted to contribute to the fortunes of his North Bergen football teammates.
“I always want to do whatever is asked of me,” Angulo said.
Last year, when the starting running back was injured, Angulo was asked to become the starter in the backfield for the Bruins.
“[North Bergen head coach Ed Somick] asked me that one game to carry the ball,” Angulo said. “Of course, I said, ‘Yes, Coach.’ I do whatever he asks me. I was always able to run with the ball if I was given the chance. He gave me a couple of carries in that game and I did exactly what he asked of me.”
Angulo didn’t care what his role on the Bruins exactly was.
“Whatever play he calls, I’m ready,” Angulo said. “If I had to block every single play, I was ready to do it.”
So Somick knew that he had a diamond in the rough in his backfield. When the Bruins faced Bloomfield Sept. 7, Somick was poised to unleash the personable Angulo and give him the chance to carry the ball.
“I definitely felt confident with Chris,” Somick said. “We have a lot more threats with this team offensively. I was definitely more content with Chris getting the ball. He definitely stepped up and filled the void. He’s like a bulldog with the ball. We’re very well rounded and balanced. It makes us more deceptive. Chris had a great game and it was fun to watch.”
Angulo was more than prepared for the game against Bloomfield.
“This game, the coaches were ready to give me the ball and I was ready,” Angulo said.
That he most certainly was.
Angulo carried the ball 13 times for 155 yards and two touchdowns, leading the Bruins to a 39-12 dominating victory over Bloomfield.
For his efforts, Angulo was selected as The Hudson Reporter Athlete of the Week for the first week of the fall high school scholastic season. Angulo is the first athlete featured for the 2018-2019 scholastic sports schedule. It marks the 28th year that the Hudson Reporter Newspapers chain has honored Hudson County scholar/athletes with the weekly feature that will culminate in June with the presentation of the Hudson Reporter Male and Female Athletes of the Year.
Angulo was pumped up to get the chance to carry the football more.
“They decided to give me the ball and I was ready,” Angulo said. “The linemen were great. Without them, I wouldn’t know what I could do. I told Coach Somick that I was going to be a key player this season. I worked hard in the weight room. The first game, I told Coach that I was going to be a key player. I was going to step up and show everyone what I can do.”
Angulo was prepared as a running back.
“When he [Somick] asked me to carry the ball more, I was ready,” Angulo said. “I felt like I could always carry the ball. Running with the ball is always something I worked hard at doing. I bring that ‘Heart of a Bruin’ every single game. Being a North Bergen running back is something I always wanted to do.”
Somick just loves Angulo’s general approach.
“When Chris has a great game like that, it’s fun to watch,” Somick said. “It’s like watching an old school North Bergen football player. His speed is very deceptive. It’s not easy to do what he has to do. He’s always working on his craft. He’s a workaholic.”
Somick says that Angulo brings a top performance every single game.
“I never have to worry about Chris,” Somick said. “He moves this way. He moves that way. But you’re comfortable enough to know he’s doing it the right way. On defense, he’s been playing regularly for three years. He knows what he’s doing. If you get in his way, he’ll pick you up and move you out of the way. His speed is very deceptive. He breaks up field and he’s not easy to catch.”
Somick believes that Angulo can continue to perform like a top-flight running back all season long.
“He’s definitely a quiet kid,” Somick said. “He’s not overly extroverted. But he can be a factor all year, both verbally and emotionally. He’s shown us that he can step up when the time comes. He was the boy in this game. Maybe he’ll be the boy all year.”
Whatever needs to be done, Angulo is ready.
“I know all those old school terms, that I’m tough and don’t go down,” Angulo said. “I can always be that old school North Bergen running back. I may not have the height [5-foot-10] or the weight [220 pounds] but no one can compare to me and my workout routine.”
Angulo already knows what he wants to study in college.
“I’m going to major in criminal justice,” said Angulo, who attends High Tech High School. “It’s a big goal for me, ever since I was a little kid. I’m a pretty good student.”
Angulo carries a 3.2 grade point average at High Tech. He’s more than just a good student to carry those grades in a tough college preparatory school. He would like to work in the Secret Service some day.
He also knows that he has more games like the season opener left in him.
“Most definitely,” Angulo said. “This is only the beginning.” – Jim Hague.

Jim Hague can be reached at OGSMAR@aol.com.