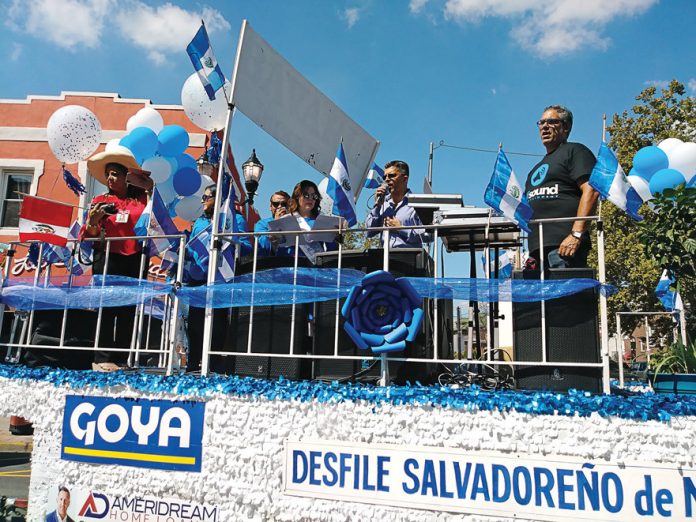 The third annual Salvadorian parade wound through North Bergen, Guttenberg, West New York, and Union City on Sunday, Sept. 16. The parade featured a number of floats, dances, and local residents sharing their Salvadorian pride. The parade started at 79th Street and Bergenline Avenue and headed to 43rd Street.
The event celebrated the day that El Salvador achieved independence from Spain 197 years ago, on Sept. 15, 1821. That day, Spanish authorities signed the Central American Independence Act after years of unrest over their rule.
Northern Hudson County’s towns have a sizable Latino population, including immigrants from Cuba, El Salvador, and the Dominican Republic. Many Salvadorans had to leave their country because of the civil war there from 1980 to 1992.

On Sunday, West New York Mayor Felix Roque served as the parade’s grand marshal. Special guests included North Bergen Mayor Nicholas Sacco, Union City Mayor Brian Stack, and Guttenberg Mayor Wayne Zitt.
The parade also featured Consul General of El Salvador Ana Lorena Siria de Lara, as well as Parade President Ingrid Echeverria, who operates a law firm in North Bergen, and the director of community relations at the Hudson County Sheriff’s Office, Emilio Del Valle.
North Bergen will hold a series of events in October to celebrate Hispanic Heritage Month.
These will include a family art activity Sept. 25 at 4:30 p.m. at the Uptown Library, and a movie and tacos event at both branches of the North Bergen library on Oct. 9 at 4:30.
The Uptown Library is located at 84-11 Bergenline Ave.; the Downtown branch is located at 21-23 JFK Blvd.
Visit https://tinyurl.com/y85ktb3v for more information.