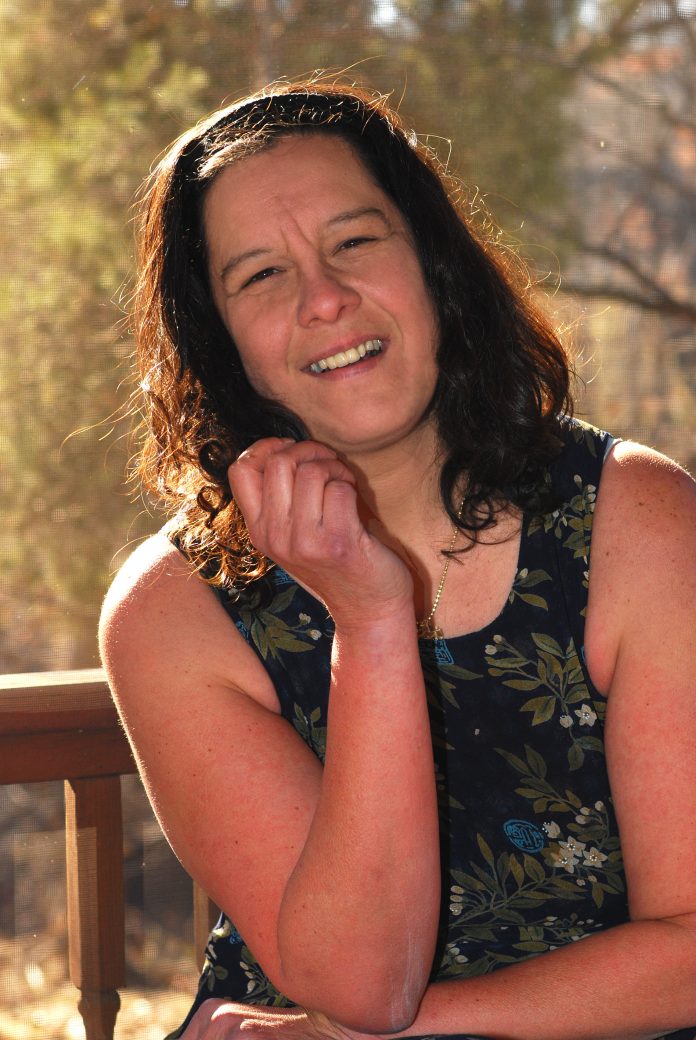 Longtime Hudson County resident Theresa Borrelli wears many hats. She’s an author, singer-songwriter, poet, and motivational anti-bullying speaker. As a person who lives with Tourette’s Syndrome — a nervous system disorder involving repetitive movements or unwanted sounds — she has had to endure bullying and false judgments for all of her life.

For Borrelli, having Tourette’s means she often stamps her feet, twists her body, or shouts.

Borelli grew up in West New York and has lived in North Bergen, Weehawken, Guttenberg, and Jersey City. She has recently spoken at several schools in the area.

Growing up in the 1970s West New York, she showed signs of Tourette’s but was undiagnosed until she was 17 years old.

“Everyone thought I was just acting out,” said Borrelli. Having a name for the condition helped, but little was known about the disorder.

Despite being a star softball pitcher in high school with a supportive family and friends, she was still the butt of a few of her peers’ jokes.

“I would stamp my feet on the pitcher’s mound and they would shout, ‘Dance, Terry, dance,’ but I ignored it,” said Borrelli.

She said now bullying is worse then it was then, as she is bullied more as an adult.

“It’s the teenagers that are bullying me,” Borelli said. “I get followed, I get threatened, I get name called. Some of them know I have Tourette’s but some don’t care. When I scream, they make fun of me by yelling back or shouting at me to shut up. It used to really bother me, but I laugh it off.”

She has recently spoken and performed at schools, day cares, and libraries. This past August, she gave a motivational talk at 3D Cafe in West New York.

She doesn’t just tell people not to bully, but to accept one another’s differences, as well as telling children they can do anything they put their minds to.

“It’s not only about disabilities or Tourette’s,” said Borrelli. “It’s about doing something in life that will make them content and happy. It’s about getting in the game and not standing on the sidelines of your life.”

Bullying has become a hot topic lately, as the country’s first lady, Melania Trump, said she has been bullied more than anyone. But average citizens have been threatened on the internet in the last few years, as have journalists covering politics.

Borrelli said she plans on sending the first lady two of her books about bullying, because she knows Melania Trump works with children who have been bullied.

Borrelli lived in North Bergen from 2005 to 2008 and in Jersey City for 10 years. She now lives in Weehawken, where she explores various creative endeavors.

“With creativity, the power of a word can reach so many people.” -Theresa Borrelli.

She’s published at least nine books, including  “I am Myself: A Woman Growing Up with Tourette Syndrome” published by Strategic Book Publishing and Rights Agency, which documented the challenges of growing up and being an adult with Tourette’s Syndrome. It was critically praised and has been placed in libraries across the world.

Her most recent children’s book, “Is Alicia Different,” is a rewrite of her 2012 book “Is Jamie Different.” It’s about the many challenges children with Tourette’s Syndrome encounter throughout childhood.

The inspirational book teaches children about acceptance of others and that it’s okay to be different.

The rewrite was made possible by local businesses who sponsored it including the Park Avenue Pharmacy in Weehawken, Romano Pizza in Weehawken,  and the Weehawken & You Civic Association.

Borrelli said her creativity comes from words and her belief that words can really have an effect on people and situations in both positive and negative ways.

“With creativity, the power of a word can reach so many people,” said Borelli.

Currently, Borelli is working on her new album through Delta Colony Studios, which will feature all genres of music from club, to rap, and rock.

This will be her second album. The first was spoken word, music,  and poetry titled “One Will, One Life.”

It will be released sometime in 2019.

She is also working on a book of her poems, doing it in conjunction with photographers whose pictures will accompany the verses.

For more information on Theresa Borrelli go to her website at theresaborrelli.com or follow her on social media.

Vigil and walk in Braddock Park to recognize overdose awareness