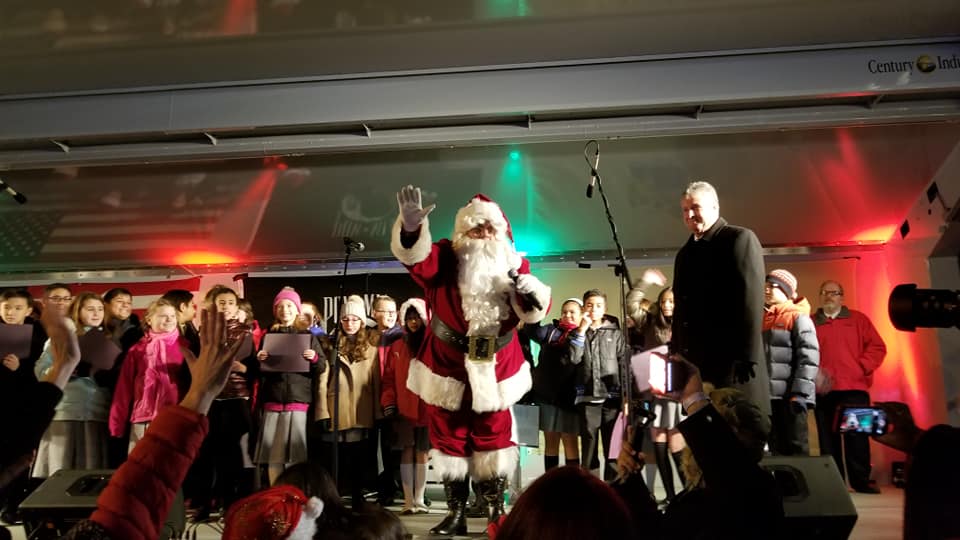 The Bayonne City Council voted to appoint Neil Carroll III to replace Tommy Cotter as the First Ward councilman at a brief special meeting held on November 20. Carroll, 27, the grandson of former Freeholder Neil Carroll Sr. and the nephew of former Mayor Mark Smith, is the youngest council member in Bayonne’s history. Cotter started his new job as the Director of Public Works earlier this month.

On Monday, November 19. disgraced Bayonne cop Domenico Lillo, who admitted to beating a man with a flashlight and lying about it, was sentenced to 42 months in prison by U.S. District Judge Kevin McNulty. Lillo pled guilty to using excessive force during the arrest of Brandon Walsh in December, 2013.

Hudson River ferries worked overtime on Nov. 15 thanks to an early snowstorm that took commuters and motorists by surprise.

During a storm that shut down the Bayonne Bridge and turned roads in Hoboken and neighboring towns into parking lots, NY Waterways reported the company took 3,500 passengers across the river on trips between New Jersey and New York, according to local reports.

NJ Transit dealt with a pileup of problems from the storm, but the ferry company cross-honored rail and bus tickets. It was the third time in November that the company has been asked to do so, NY Waterway stated.

According to NY Waterway, its ferries ran past midnight during the snowstorm. Some took commuters from Manhattan’s West 39th Street Ferry Terminal to the Port Imperial Ferry Terminal in Weehawken, where passengers continued their trips on the Hudson-Bergen Light Rail or by bus or private car or cab.

All ferries ran on or close to schedule, according to the company, with additional ferry trips to ensure passengers arrived at their desired locations, although the company’s free bus connections were hampered by the unexpectedly heavy snow fall.

Following the lead of Hudson County Executive Tom DeGise’s decision to raise the minimum wage for all county workers, Hudson County Community College (HCCC) Board of Trustees approved implementing a $15 minimum wage for all non-union employees of the college. The decision will impact 1999 employees, including part-time staff, at an additional cost of $476,000 per year.

“County Executive Tom DeGise has led on this issue for many years.  Our Board Chair William Netchert, the Board of Trustees and I share the County Executive’s view, and we are taking action on this issue,” said HCCC President Chris Reber in a press release.  “Since I arrived at HCCC, I have been struck by the dedication and commitment of our faculty and staff.  This resolution will benefit our employees and their families, and the increase will not impact the tuition paid by our students.”

“I am pleased to see that the Community College has made this choice,” said County Executive Tom DeGise in the press release. “President Reber and Chairman Netchert and the Board have shown that you can maintain high standards, operate within a budget and treat your employees fairly. It is also an implicit lesson for their students about the values we stand for as a county.”

Gov. Phil Murphy says the state allocated $2.1 million to help immigrants facing deportation, according to the Associated Press. The grant agreement called for in this year’s budget was finalized Monday, Nov. 19. New Jersey joins other Democratic-controlled states like New York and California that offer legal help to poorer immigrants. Last year, a public-private partnership to help immigrants was announced in New York, whose immigrants are detained at the Bergen and Hudson county facilities in New Jersey. New Jersey Republicans criticized the expenditure on Monday.

A new site is giving seniors access to NJSave programs, which are open to New Jersey residents who are at least 65 years old or receiving Social Security disability payments. In the past, each program required its own paper application and eligibility assessment. Visitors can access help to cover drug costs and apply for programs that provide funding for hearing aids, fall-detection devices and Medicare premiums. They can also connect with heating and energy assistance, food stamps, and other public support.

After months of delay and backroom disputes, state lawmakers are expected to finally begin voting this week on legalizing marijuana for people 21 and over, according to NJ Advance Media. Separate state Assembly and Senate committees will meet together for a hearing of debate and are expected to vote on the legalization bill on Monday, Nov. 26 at 10 a.m. The negotiations over the legalization bill (S2703) have stalled in recent months between state Senate President Stephen Sweeney and Gov. Phil Murphy, who have disagreed over the tax rate and whether a new commission should exercise control over the new industry. A source familiar with Murphy’s side of the negotiations said Murphy and the Legislature are at “an impasse.” On his call-in radio program Monday night, Murphy said he awaits a final version of the bill from lawmakers. Meanwhile, the first recreational marijuana dispensary in the region opened in Massachusetts last week.

Hudson County Community College (HCCC) and Fairleigh Dickinson University (FDU) have signed a dual-admission agreement that allows students to complete their Associate of Applied Science degree in Construction Management at HCCC and transition to the Bachelor of Science in Construction Engineering Technology program at Fairleigh Dickinson University (FDU).

Under the terms of the dual admission agreement, students who are enrolled in the HCCC Construction Management Associate in Applied Science (A.A.S.) degree program may apply to the FDU Construction Engineering Technology Baccalaureate program. Once students have completed their A.A.S. degree at HCCC, they will be granted 52 credits in the FDU Baccalaureate program.  Students in the HCCC-FDU dual admission program are eligible for a 40 percent reduction in the FDU tuition rate upon completing their Associate’s degree. Merit scholarships and housing grants are also available to qualified students.

At Middlesex County College this week, state officials announced that the Supplemental Nutrition Assistance Program (SNAP), formerly known as food stamps, will expand to recognize all approved Career and Technical Education Programs at NJ community colleges. Students who meet SNAP income eligibility standards and participate in these training programs will now have access to food assistance. In 2017, 67,000 students were enrolled in these career and technical education programs, with an estimated 45 percent considered low-income based on financial aid records, according to the Council on County Colleges. The changes will begin next month.

Attorney General Gurbir Grewal announced the state settled with the Nanticoke Lenni-Lenape Tribal Nation, and will pay the tribe $2.4 million. The state will officially proclaim it has recognized the 3,000-member Native American tribe, but it made no admission of wrongdoing in the agreement. In 2012, the state decided to no longer recognize three tribes. In 2015, the Nanticoke Lenni-Lenape tribe filed civil rights lawsuits after trying to negotiate with the Christie administration. The tribe lauded the new settlement.

New Jersey’s Homeland Security director announced Thursday that the state is working with the FBI to launch #ThinkBeforeYouPost, an anti- “hoax threat” awareness campaign. False or non-credible threats have affected Lakewood, where a student was arrested; Mahwah, which added extra patrols to a school; and Paterson, where 15 schools undertook emergency precautions on Halloween. Hoax threats made in texts, emails, or social media are a crime that can be prosecuted federally, with up to five years in prison.

A New Jersey appellate court has ruled that people must allow law enforcement officers access to their cellphones once they receive a warrant. The Essex County-based defendant, Robert Andrews, had argued that information on his phone could be self-incriminating, violating the Fifth Amendment. The court said investigators in the case had established probable cause when they obtained warrants to search the phones. Justices concluded there was no basis for offering “greater protections against self-incrimination.”

AG investigating death of motorist who died after setting himself on...