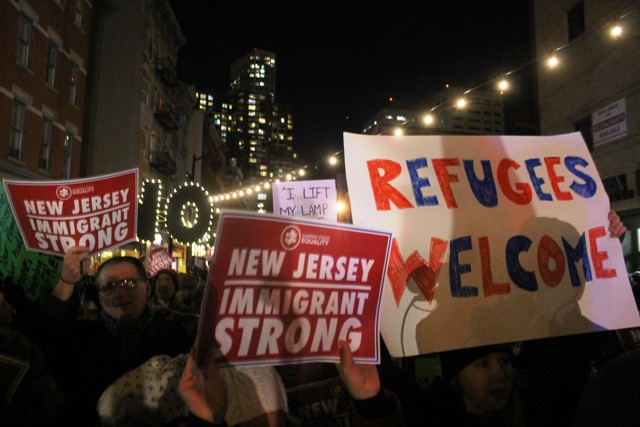 Undocumented immigrants are welcome in places like Jersey City. But they will still need things like a driver’s license to get to work. Pictured here an immigrant support rally in Jersey City from 2017
×

Undocumented immigrants are welcome in places like Jersey City. But they will still need things like a driver’s license to get to work. Pictured here an immigrant support rally in Jersey City from 2017

Activists are determined to change state laws in order to make it easier for seniors, undocumented immigrants, and other marginalized groups to get drivers’ licenses. They have recently conducted a series of educational protests to pressure state officials to loosen rigid laws requiring several forms of identification.

On Nov. 17 and 18, residents in multiple cities across the state called on legislators to expand access to driver’s licenses to include the formerly incarcerated, undocumented immigrants, seniors, victims of violence, and members of the LGBTQ community.

The issue is a big one in Hudson County, which has the most diverse ethnic population of any county in the state, and active job training programs for ex-criminal offenders, who are coming back into society seeking job or educational opportunities.

Expanded access to driver’s licenses is expected to benefit all residents of the state through increased road safety, a boost to the state economy through collection of fees and insurance payments, and decrease the risk of family separation.

New requirements would largely be the same as those for existing licenses. Immigrants would still need to provide proof of where they live and who they are, using the ID point system. But legislation could allow foreign passports and other official documents that currently are not allowed currently. The Division of Motor Vehicle also does not recognize identification given to ex-offenders after they have served their sentences, something they would need in order to obtain a license.

“It’s impossible to know just how many people there are in Hudson County that need this,” said Brian Lozano, of the Wind of the Spirit, a statewide activist group that has been pushing for this and other changes for several decades.

His group is one of the forces behind the “Let’s Drive NJ campaign” which has held vigils, forums, and rallies to demand legislators move forward with a bill to expand access to driver’s licenses to more residents.

Since Hudson County is seen as one of the prime destinations for immigration, documented and undocumented, the need is probably significant here, he said.

“People will still have to go through the testing process to get a license like everybody else.” – Brian Lozano

Aiding immigrants and the public

These populations need licenses in New Jersey partly because they cannot easily access jobs around the state using public transportation.

Many may feel forced to drive illegally if it is a choice between having a job to support a family or not.

“Many still have to get to work, a doctor, church, school or entertainment,” Lozano said.

This puts the general public at risk because an unlicensed driver cannot obtain car insurance against possible involvement in an accident.

“Because there is not yet immigration reform on a federal level, states need to do it,”  Lozano said.

The change would allow immigrants to contribute to the general society through the revenues they have to pay in fees, insurance payments, and such.

The six point system is basically split into two categories – one tells the state who you are, the other tells them where you live. People with a passport issued in the United States or an original birth certificate receive four of the six points on the first category. Bills with an address, credit card statements, and such fill the final two points.

But many immigrants have official documents that were issued overseas, and these are currently not accepted, Lozano said.

Jersey City has been wrestling with the concept of a city issued ID card that would allow undocumented residents access to certain benefits, including possibly opening a bank account.

An official driver’s license could be used for many of the same purposes, although it would not allow undocumented to obtain any federal benefits or access to any federally funded programs, like were once called food stamps or WIC.

But a license might be able to allow them to open a bank account provided there are no federal regulations prohibiting it.

People with licenses will contribute to the general economy in a number of ways, not just by paying fees associated with the license, but in related purchasing such as auto insurance, gasoline, auto parts and more, Lozano said.

“People will still have to go through the testing process to get a license like everybody else,” he said. “This will improve safety on the roads.”

A change is within reach

With Democratic Gov. Phil Murphy in office – who said he agreed with the concept – and a state legislature that is predominately Democratic, the change of law is within reach.

Another perhaps more significant challenge will be to convince undocumented residents to seek the licenses at a time when federal immigration authorities have been cracking down.

“We can’t wave a magic wand and relieve all their fears,” Lozano said. “There is a risk. But we are working with groups that working with other states about establishing best practices here for privacy. The federal government cannot have access to these records without a court order.”