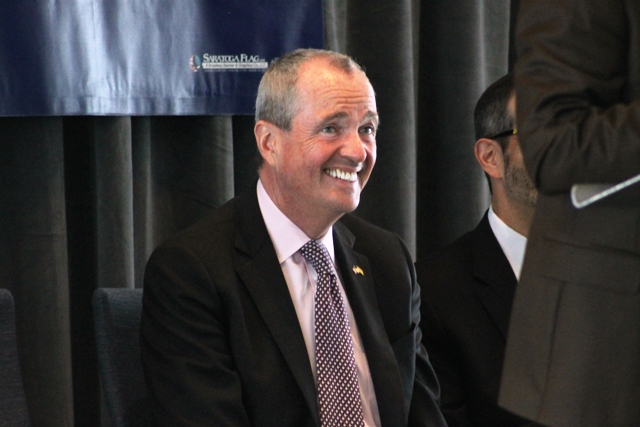 Armed with a new state audit showing New Jersey’s programs for economic development from the Christie administration were in far worse shape than first imagined, Gov. Phil Murphy came to Jersey City on Jan. 16 to unveil a new program.

At a press conference held at the Indiegrove, work space f on Newark Avenue, Murphy said he was not surprised by the conclusions of the audit. But he said the size of it was eye opening. He said it appears that as much as $11 billion in various tax breaks and subsidies dedicated to job growth and economic development may have been wasted and did not achieve the job creation the giveaways were intended to create.

After touring the operations at Indiegrove, Murphy laid out a five-part plan for revamping the state’s economic redevelopment program, setting specific goals and putting clear caps on spending.

One of the reasons he picked Jersey City for the announcement, he said, is because Jersey City already has initiated a number of key elements toward obtaining the state’s objectives.

He said his plan is designed to restore New Jersey to its historic place as an incubator for startup business, noting that the state was once “Silicon Valley before there was a Silicon Valley,” which included some notable inventors such as Thomas Edison and Alexander Graham Bell.

He said until a few years ago, New Jersey was rated in the top five states for innovative development, but has since fallen to 15, behind places like Northern California, Boston, and Austin, Texas.

Murphy said the new approach to economic development would include efforts to support startup companies, and focus on job growth.

He said this includes promoting ties between business and universities, noting that the state has a number of high-quality institutions, including Rutgers University that already has a $700 million program and world-recognized Princeton University whose program is considered one of the best in the world. Along with these are quality programs at institutions such as Stevens Institute of Technology.

No more awards won through ‘connections’

“This is a change of focus,” Murphy said, noting that the plan would approach startup investment from theoretical through commercial.

“We need real economic growth in this state,” he said. “There will be no more outsized awards that were won through connections, rather than merit, and no more open-ended commitments we can’t afford.”

“Projects not only need great talent and great ideas, but they need capital.” – Gov. Phil Murphy

The five initiatives will help revise the expiring tax incentive programs that are currently administered by New Jersey’s Economic Development Authority, he said, and will have firm caps on spending. The plan will also attempt to create partnerships that would generate commercial investments.

While big companies would not be excluded from applying, these must have some ties to startup development and real job creation.

The first of these will be NJ Forward, and would replace the current program known as Grow NJ and would specifically target high-growth industries that would generate high-wage jobs.

He said this would focus on opportunity zones throughout the state. There are 169 census tracks that would qualify for federal incentives, including a number in Jersey City. This program is designed to attract private investment and to encourage hiring locally.

He said the state has a number of very attractive industries that would benefit from this including biotech, life sciences, TV and film (he said he intends to restore film subsidies), and transit-related enterprise.

“This program would be capped at $200 million a year and would be first-come-first-served, and the award would last for five years,” he said.

The second proposal – New Jersey Aspire – would also replace an existing program and would be designed to promote community and neighborhood investment, targeting vacant or underused property for creation of work-space developments and affordable housing. The state would set aside $100 million annually, Murphy said.

The third proposal would replace the current Brownfield grant program and create a competitive tax-credit grant that sets aside a total of $20 million to clean up contaminated land for development with no more than $4 million going toward any one project.

This would have the added benefit of creating more jobs and helping to undo the negative environmental legacy industry has created.

The fourth program would create a new state historic tax-credit program to preserve and give new life to historic buildings through rehab and redevelopment.

“During my tour of Bayonne I saw a huge need for this,” Murphy said, “as well as places in Jersey City.”

This would also encourage private development to help save these historic buildings.

The state would set aside $20 million annually, and would create a project cap of $4 million, although there could be bonuses for projects that develop 20 percent affordable housing units.

The fifth element called Evergreen would serve as a fundraising mechanism for the other four proposals. It would set aside about $100 million annually to help draw additional private-sector investment in startups and other companies.

“Projects not only need great talent and great ideas, but they need capital,” Murphy said. “Evergreen will be designed to help raise capital.”

Murphy said these five proposals are intended to “fix a broken system” and will be based on merit instead of political connections, and there will be “no more endless handouts.”