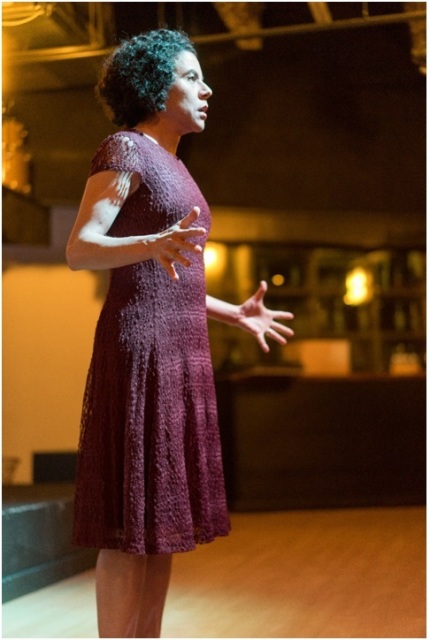 Nancy Méndez-Booth hadn’t intended to write a play. Nor did she plan to become an actor.

But one thing led to another, and her reading some of her monologues in public has led her down a different path than she intended.

So she will appear in “I Don’t Know How She Does It,” a one-woman show at the Jersey City Theater Center on March 13.

In a series of interconnected monologues, Mendez-Booth unveils a character who is a Puerto Rican woman who rises, as she describes it, “from public housing to become a Pulitzer Prize winner, despite an apathetic Virgin Mary, tragic loss,and an epic downpour of bird poop.”

The staged reading is part of Writers Theatre of New Jersey’s “HERstory” month celebration, organized in partnership with JCTC and Speranza Theatre Company, and will feature Méndez-Booth and other writers in the New Jersey Women Playwrights Program.

The show focuses on eight defining moments in one Boricua’s life that show how imagination and humor help her survive, achieve and face down the haters —most especially herself. The show is loosely autobiographical, inspired by the playwright’s own journey to overcome “brown shame”, her lack of faith and the loss of her infant son.

“Going through a lot of drafts, titles and reflection made me realize that throughout my life, when people say, ‘I don’t know how you do it,’ some of them meant, ‘I didn’t think you could.’ A poor, brown girl would never get anywhere, and after decades, I believed everything about me was a liability.”

She hopes the show illustrates that anyone can overcome the challenges life presents—and recognize the limitations we internalize and place on ourselves.

“I know from experience that it doesn’t take super powers or money or privilege to get to the other side of whatever holds you back. It’s not easy, but it’s possible.” — Nancy Méndez-Booth

Méndez-Booth moved to Jersey City when it was still cheap to live here. She got her first degree in English from Rutgers University, but was caught up in the corporate world, dealing with issues such as copyrights.

Although she was the victim of corporate downsizing over the previous decade, when it happened again in 2010 she decided to try and build a career as a writer.

So she went back to Rutgers to get her MFA. She didn’t know what to expect, but she figured she had to give it a try.

“Then I could see where it went from there,” she said.

She started to write short fiction, and helped bolster the family finances as an adjunct professor at various places, CUNY, Rutgers, Montclair State University, and Stevens Institute of Technology in Hoboken.

Acting came as a result of her reading her work in public, and she got a positive reaction.

“They mistook me for a spoken word artist and I wasn’t about to correct them,” she said.

Her first public performance was in a Jersey City-based program on Women of Color.

“I Don’t Know How She Does It” is the first public staging of a show that took about 18 months to develop, and is based partly on a blog she did. She didn’t realize at first that these short pieces were meant to be performed, and as a group.

“This about a journey,” she said. “They outline a cycle of life.”

The show runs about an hour, she said. And while she is looking at other pieces for a possible follow up, she hopes she can market this show to larger venues.

The show will be held on March 13 at 7:30 p.m. Doors will open at 7 p.m. Tickets are $10 for general admission, and are available for purchase at wtnj.secure.force.com/ticket/#sections_a0F6100000IObf0EAD

Jersey City Theatre Center is at 335-337 Newark Avenue in Jersey City, and online at jctcenter.org.