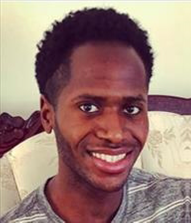 According to a press release from the Hoboken Police Department, officers are currently looking for Jamie Kwebetchou, who was recently reported missing.

Kwebetchou, age 27,  is described as an African American male of medium skin complexion with a thin muscular physical build. He is 5″10 in height and weighs 175 pounds, according to the press release which also describes him as having black afro-styled hair cut short on the sides, and black eyes.

Kwebetchou was last seen on Saturday, May 4, at 12:15 a.m. at the Wicked Wolf Tavern at 120 Sinatra Drive in Hoboken, wearing a white T-shirt, black leather jacket, and bluejeans.

Kwebetchou’s friends and family have not heard from him since May 4.  He was reported missing by family and friends at the Baltimore Police Department.

Anyone with information as to his whereabouts is asked to call Detective Arturo Gonzalez at 201-420-2132 or email at gonzalezar@hobokenpd.org