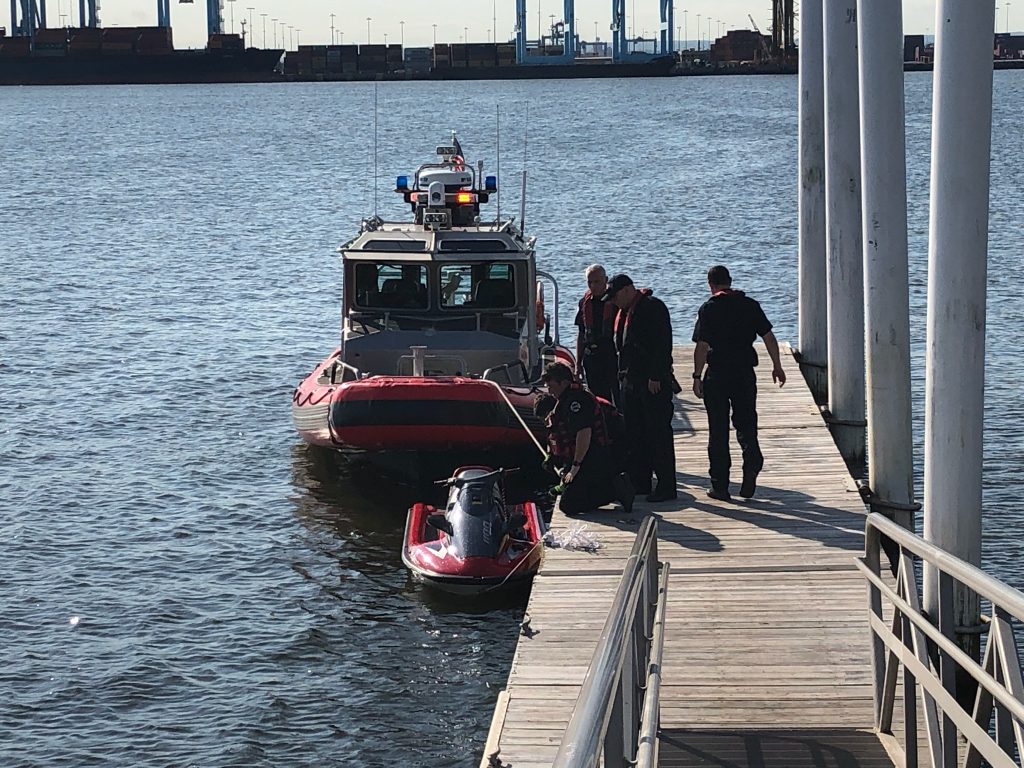 A man was rescued from Newark Bay on May 8 after his jet ski malfunctioned.
× 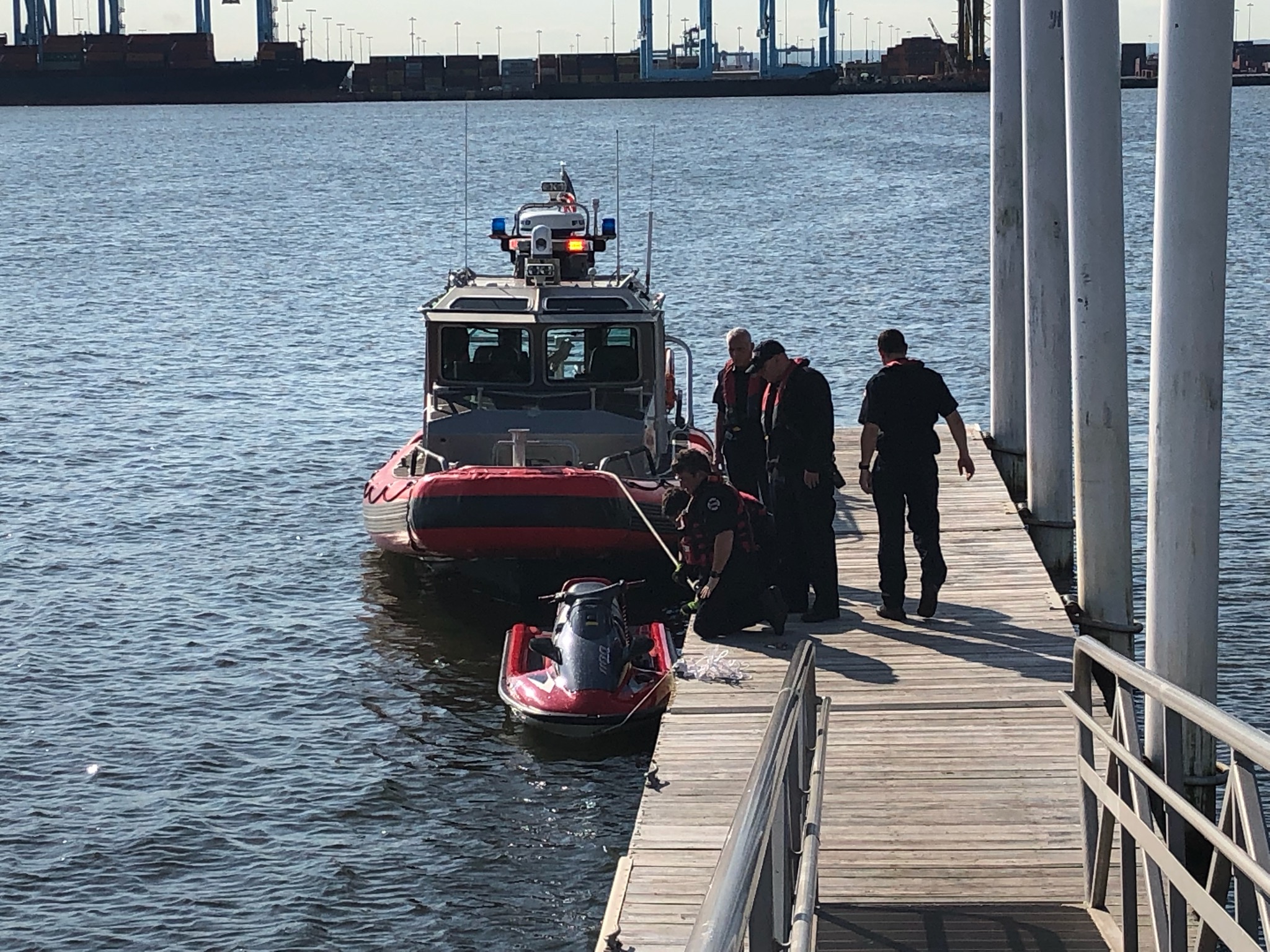 A man was rescued from Newark Bay on May 8 after his jet ski malfunctioned.

A man was stranded in the Newark Bay shipping channel on the afternoon of May 8 after his jet ski malfunctioned, according to Bayonne Fire Chief Keith Weaver. The Bayonne Fire Department’s fire boat responded at around 4:30 p.m. and removed the man from the water as a large commercial container ship passed within 50 feet of the jet ski. The man was treated for potential hypothermia due to exposure to water temperatures in the 50-degree-range. The operator was wearing a personal flotation device and attempted to swim to shore, towing the jet behind him. He was unable to swim toward the shoreline due to water conditions and the current in the bay.

The Bayonne Police Athletic League’s board of directors was considering discontinuing the league’s boxing program last week, but later had a change of heart, according to PAL Director KT Torello.

“It’s been resolved,” Torello said. “The boxing program isn’t going anywhere. It was nothing.”

Many community members were confused when news circulated on social media that the board voted to discontinue the program, confusing the PAL board of directors for the Bayonne Board of Education, which owns the building in which the PAL program operates.

As the case with all communities in New Jersey, the PAL and the board of education are not connected.

A fire that started in the cellar of a multifamily home on West 29th Street on May 6 resulted in the displacement of 12 people who are currently under the assistance of the Red Cross, according to Bayonne Fire Chief Keith Weaver. No injuries were reported. The cause of the fire, which is not considered suspicious, remains under investigation.

The two-alarm blaze started at around 5:30 p.m. Firefighters found smoke conditions and a fire in the cellar, then stretched three hose lines to extinguish the fire, preventing it from extending to upper floors. The fire was placed under control by 6 p.m.

A 51-year-old Bayonne man was arrested last week and held at the Monmouth County Correctional Institution after being arrested in connection with a May 2017 alleged home invasion in Holmdel. James Mainello was charged with robbery, aggravated assault, theft, weapon possession, burglary, and criminal restraint, according to the Monmouth County Prosecutor’s Office.

The home belongs to “Real Housewives of NJ” cast member Claudine “Dina” Manzo and her fiancé David Cantin. The couple was allegedly confronted by two men waiting for them inside their townhouse at around 11 p.m. on May 13, 2017.

One of the men allegedly struck Cantin several times with a baseball bat while the other allegedly punched Manzo several times, according to police. The men then allegedly tied the couple together while they stole cash and jewelry and fled. Cantin and Manzo suffered broken noses and were later treated at a hospital.

Mainello was arrested Friday after a nearly two-year investigation by the Holmdel and Bayonne Police Departments, the U.S. Marshals Service, and Monmouth County Prosecutor’s Office.

Last week, New Jersey Attorney General Gurbir Grewal filed a lawsuit to learn why the U.S. Justice Department has decided to challenge the state’s $350 million online gambling industry. Grewal said his goal is to “figure out whether this federal crackdown is the result of a lobbying campaign by a single individual seeking to protect his personal business interests,” referring to Trump supporter Sheldon Adelson. Grewal filed a FOIA request in February, but he didn’t hear back, according to NJ.com.

A Princeton University student who wrote “Title IX Protects Rapists” graffiti on a campus walkway has been penalized with 50 hours of community service, four years’ probation, and a fine to repair the damage, totaling $2,722.58, according to Planet Princeton. A crowd-funding campaign set up by fellow students will take care of the fine: it has already raised nearly $4,000. The SHARE Peers for Title IX Reform group said the university “is suppressing the voices of survivors,” whereas a university spokesperson said “allegations are investigated thoroughly.”

Last week, about 60 nursing home aides from 1199SEIU United Healthcare Workers East held a demonstration outside the statehouse in Trenton, advocating for action on a bill that has stalled in the state legislature. The bill would improve working conditions by boosting the minimum number of staff allowed on the floor. If the state assembly were to vote on an amended bill, it would need to be approved by the state senate before landing on Gov. Phil Murphy’s desk. Three years ago, the bill was passed by both houses of the state legislature before it was vetoed by former Gov. Chris Christie.

Engineers coming to NJ Transit. Will it be enough?

Twelve soon-to-be NJ Transit engineers met Gov. Phil Murphy last week after reaching a milestone during their 17-month training program, according to NJTV News. NJ Transit seeks new talent because it’s operating with a staffing deficit: 330 engineers work at the agency, yet it needs over 400 for the railroad to run without interruptions from staffing shortages. The agency expects to add at least 100 engineers by the end of this year.

Memory of Georgia lynching lives on in Bayonne