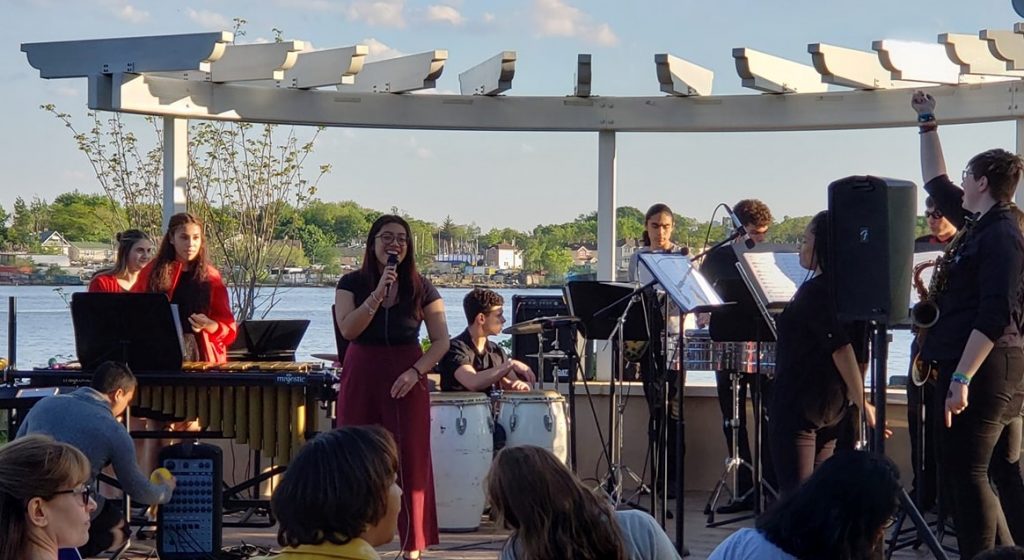 The Bayonne High School Latin Jazz Band performed at the Art in the Park series at Dennis Collins Park on Thursday, May 16.
× 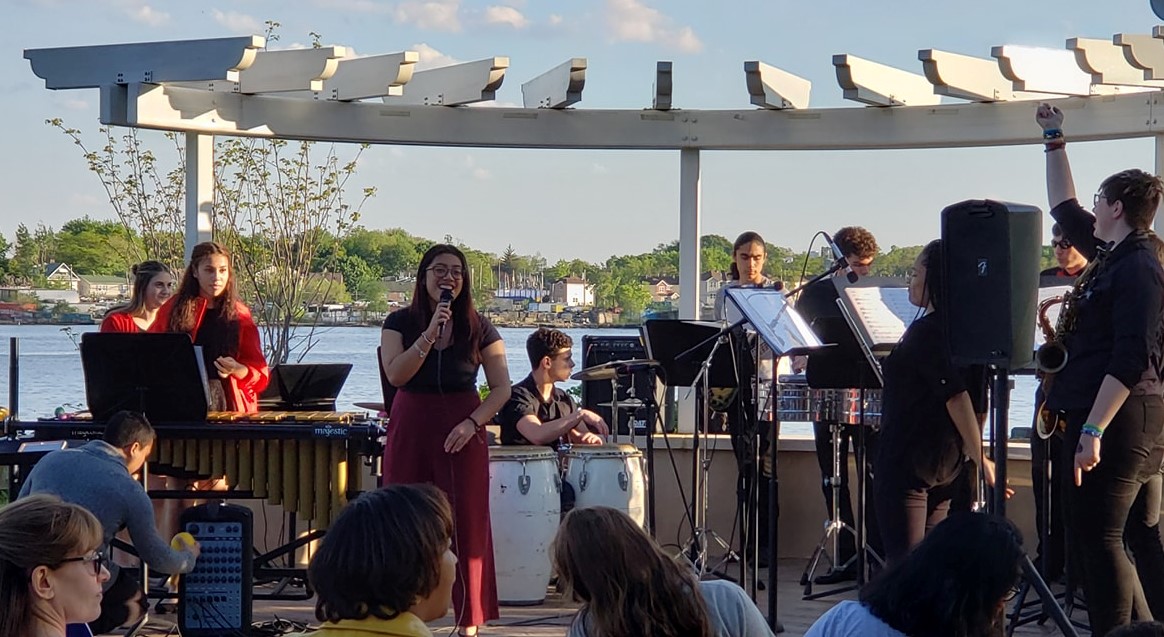 The Bayonne High School Latin Jazz Band performed at the Art in the Park series at Dennis Collins Park on Thursday, May 16.

Bayonne’s 13th annual relay for life, meant to fund research into defeating cancer, will take place at 16th Street Park, lower level, on June 1 from 12 p.m. to 12 a.m. The event is for families and individuals and in addition to the relay will include vendors, games, and entertainment. For more information, contact Joanne Baran at jmbarran@aol.com or call 201-858-2380.

KRE Group announced that it has closed on a $45 million, three-year construction loan, and a $5.4 million predevelopment loan, to build three buildings with 200 rental units and 10,000 square feet of retail space at Harbor Station North, located across Route 440 from the 45th Street light rail station.

The three-year loan, provided by PNC Bank, NA and People’s United Bank, NA, will finance this phase of the construction. The Avison Young New Jersey Capital Markets Group, led by George Gnad, principal, served as the broker for the transaction.

The site was originally assigned to Fidelco Bayonne Properties, LLC, to which the Bayonne City Council granted a 30-year tax abatement. The company was originally approved to construct 800 residential units.

Bayonne woman sentenced to 8 years in prison for manslaughter

Michelle Hurley, of Bayonne, was found guilty of aggravated manslaughter last week for a 2015 incident in which she strangled her husband to death with a phone cord. Hurley was sentenced to eight years in prison.

The Hurley incident started with an argument over the couple’s divorce proceedings on Sept. 28, 2015. Police found David Hurley unresponsive with a discolored face and a bloody neck. Hurley was hospitalized until his death on October 8, 2015.

Hurley told the judge that she did not mean to kill her husband and apologized to his relatives. In December, she was found not guilty of homicide.

Legalized recreational marijuana will be put to a vote

State Senate President Stephen Sweeney announced that after months of struggling to reach an agreement on the legalization of recreational marijuana he is ending efforts to pass such a bill through New Jersey’s legislature. Legislators supporting legalization failed to secure enough votes for any hope of the bill to pass.

Sweeney announced that a referendum will be cast in November 2020, which will effectively leave the fate of legalization in the hands of voters over a year from now.

Sweeney also said that he would be moving forward with two similar bills. One bill, which currently has bipartisan support, aims to expand New Jersey’s medical marijuana program.

According to this bill, patients would be able to receive medical marijuana in topical, edibles, and oils. Currently, only minors can receive marijuana in concentrated forms, whereas adult patients can only buy the drug in its raw form.

This bill also removes the two-ounce limit on 30-day supplies that patients can receive for their conditions. Instead, patients would be able to receive marijuana at any quantity prescribed by a physician; if they don’t get a quantity prescribed, their supply could be given at the discretion of a treatment center.

The new rules, which will appear in the New Jersey Register on May 20, add seven “debilitating medical conditions” including PTSD, by statutory enactment; and six new conditions that include anxiety, chronic pain of visceral origin, chronic pain related to musculoskeletal disorders, migraines, Tourette syndrome, and Opioid Use Disorder. The rules also expand the forms of medical marijuana available in New Jersey to include oil-based formulations, like vape cartridges.

Additionally, the rule includes the following changes that will go into effect upon publication:

Creating a separate permitting system for cultivation, manufacturing and dispensing marijuana for medical purposes, which would increase the available supply of, and patient access to, usable marijuana and allow for specialization in the market

There are currently 46,300 patients, 950 doctors and 1,850 caregivers participating in the program.

Patients and caregivers can visit the Medicinal Marijuana Program’s website and refer to the FAQ section for additional information.

An unofficial copy of the rules is available on the Department’s website: https://nj.gov/health/medicalmarijuana/program-rules/.

At a transportation hearing in Trenton on May 9, Sen. Majority Leader Loretta Weinberg (D-Bergen) emphasized how urgently NJ Transit needs funding. While discussing the $25 million subsidy in Gov. Phil Murphy’s proposed state budget for fiscal year 2020, Weinberg said, “I get no complaints about the Turnpike. I get plenty of complaints about NJ Transit.” After her deputy in the Senate, Paul Sarlo (also D-Bergen), disagreed, Weinberg said, “my budget chair is ill informed,” according to NJ.com.

S1784: Expands Medicaid coverage for consulting doulas, a birth coach, during pregnancy and after childbirth

S3365: Creates three-year Medicaid pilot program for perinatal care (which refers to the time immediately before and after birth)

The Jersey City school district currently has a $120 million budget shortfall. Last week, approximately 272 teachers in the district received layoff notices indicating their contracts won’t be renewed at the end of the school year. It’s possible that fewer teachers will lose their jobs, because the budget does not yet reflect revenue from payroll tax. The week prior, the district sued the state after receiving a significantly lower share of money allocated for public schools.

The nonpartisan Office of Legislative Services has presented a budget report before the state Assembly. The findings show that the state budget is now in better shape than its analysts originally expected, thanks to $484 million in revenue from taxpayers. Gov. Phil Murphy’s administration hoped for higher-than-expected tax collections while boosting property tax relief if lawmakers support a millionaire’s tax and a rainy day fund.

A report released last week by the UnitedHealth Foundation, which is associated with the insurance giant, ranked older adults nationwide on a number of health measures. New Jersey climbed up this year: now, the state is 21st. Last year, it was ranked 23rd. But in 2017 and 2016, it was slightly better, at 19th. There’s a new segment: adults ages 65 to 74, who are drinking more, have higher rates of diabetes and obesity, and are more likely to die from suicide than they were years ago.