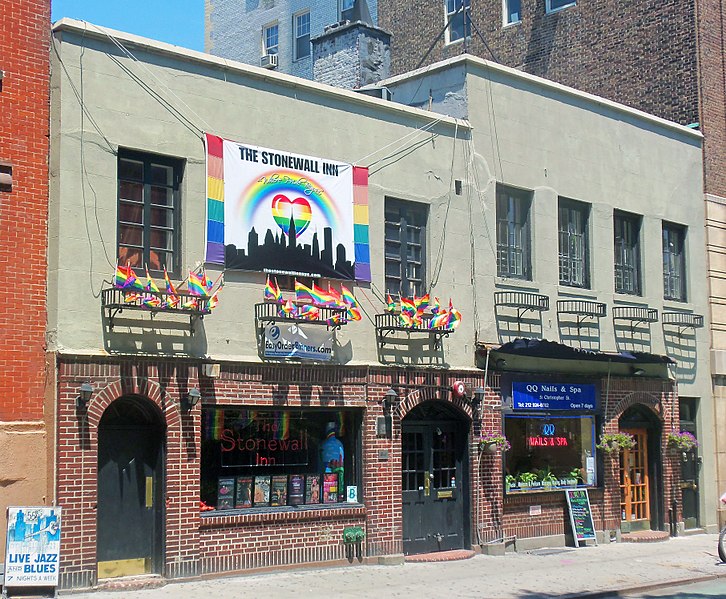 On June 29, 1969, the day after the Stonewall Inn uprising in New York City’s Greenwich Village, Bayonne native Les Levine, then 20, saw bricks, broken bottles and broken glass outside on the street.

He went inside and asked a distraught black transgender woman sitting at the bar what happened. “It’s the cops,” she said.

“I immediately got quite frightened,” Levine recalled. “I chickened out, and I hightailed it to Julius’.” Julius’, which is still in operation, was very different from the Stonewall Inn, but Levine stood in solidarity with the refusal of gay people to be oppressed and assimilate into hetero-normative culture.

The night that changed history

In the middle of the night of June 28, seven plainclothes detectives and a uniformed officer from the New York City Police Department raided the Stonewall Inn, a safe haven for LGBTQ people who did not, or could not, hide their sexual orientation. It was years before the term LGBTQ entered the lexicon. The raid was one of many carried out by the NYPD in that decade when expressing same-sex attraction was effectively criminalized.

Police usually raided bars in the middle of the week at around 6 p.m., but in the middle of the night, this raid quickly turned violent with patrons throwing coins at the police, mocking the system of payoffs. Police asked patrons for identification and brought many out to a paddy wagon waiting outside.

Coins quickly turned to bottles being thrown. The riot that ensued is widely considered a turning point in the movement for gay liberation and a societal renegotiation of normative customs.

Earlier this month, NYPD Commissioner James O’Neill offered a formal apology for the department’s actions in the Stonewall riots.

“I do know what happened should not have happened,” he explained. “The actions taken by the NYPD were wrong, plain and simple. The actions and the laws were discriminatory and oppressive and for that, I apologize.”

The comfort of community

Levine, now 70, started going to Manhattan in 1968 and found a community at Julius’. “There was a sense that you didn’t see any drag queens or transsexual people at Julius’,” he said.

“Julius’ was homogeneous, mostly white guys, no women,” Levine said. “If they stepped out on the street, you wouldn’t know they were gay. People at Stonewall, it was obviously their place, so they were far more courageous in my view. They had nothing to lose. Even then, in my view, they were marginalized in the gay community and well outside the pale of many in the gay community. They were the real heroes.”

Levine wasn’t unique in finding like-minded people in the Village. Bayonne, like most places in the 1960s, was not a welcoming place for those not a part of the dominant culture dictated by heterosexual white Christian society.

“Was Bayonne welcoming? Not really,” said Levine. “I don’t see a big gay presence in Bayonne now. Bayonne was typical of the kind of small-town view of gay people in the ’60s. I did not have a very good time in high school. It was a very difficult time for me. But I was confident in myself and who I was. That saw me through. When you’re an adolescent, and you’re made to feel like a criminal because of who you’re attracted to, it’s very destructive. That stays with you.”

“I knew who I was. I understood my sexuality very early on in my life, and I never tried to hide it or pretend otherwise,” he said. “I was extremely lucky because I had very supportive and loving parents. I know that is the exception rather than the rule.”

New York City’s Gay Pride Parade, which started in 1970, has been an annual tradition in Levine’s life.

“Every Pride has been extraordinary,” he said. “The most overwhelming one was the year that gay marriage was allowed by the Supreme Court. I’ll never forget.

The beat goes on

Today’s youth are now carrying the torch, lit by the youth of the 1960s who were building a social movement for equality in all spheres of American life.

“The revolution in the gay world, I view it in retrospect as one step in a very long process,” said Levine. “That process has to be internalized. I applaud young people today. For the most part, I find them to be far more accepting and inclusive. Sexuality and sexual identity isn’t as much of an issue. They want to be inclusive. It’s a tremendous stride forward.”

“I believe that the generation of LGBTQ people that will be fully accepted has yet to be born,” he said. “That’s in the future. Once there begins a true change in society, no matter the reactionary forces, you cannot turn back the clock. Once the genie is out of the bottle, you can hide the genie, you can try to pretend he’s not there, or demonize the genie, but you cannot put it back in the bottle.”

Levine now lives in downtown Bayonne with his longtime partner.

A role model for Millennials