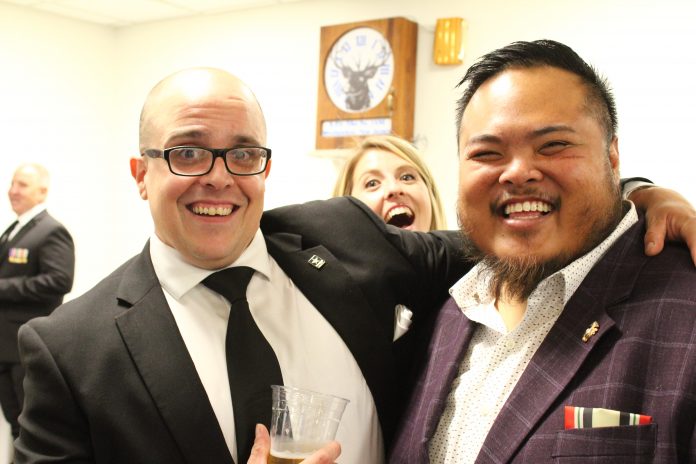 The celebration was popping at the Weehawken Elks Lodge just off Boulevard East, where veterans and community members from the local community and throughout Hudson County gathered in celebration of American Legion Post 18’s 100th anniversary.

The post was founded in 1919 by Commander William Donnelly, and has gone through major upgrades in the past few years. The goal was to create space for community service projects for veterans and non-vets.

The post held its first naturalization ceremony under the current command for a group of newly-naturalized U.S. citizens a few months ago. It’s a tradition that dates back about as far as the Legion itself. Commanding officers of the post said that they’re seeking to put on at least two of those ceremonies each year.

The anniversary celebration took on a historic tone when the East Coast Doughboys, a group of World War I re-enactors largely from New York and New Jersey, served as the color guard. Their uniforms reflected the post’s World War I roots. The group performed music from the era.

The event was organized and led by Chris Page, the post’s Commander, and Lieutenant Colonel Justin Constantine served as MC for the night.

Erica Page, Chris Page’s wife, performed an operatic rendition of the National Anthem with a passion that matched that of the post’s membership that night.

Joe Fredericks, a 96-year-old World War II veteran and lifelong Weehawken resident, was one of many guests at the event. That he displayed excellent form wielding a ceremonial sword came as no surprise to those familiar with his background.

Fredericks is one of the last members of the OSS, a World War II-era intelligence agency, a precursor to the CIA. He doesn’t shy away from telling war stories of missions in which he jumped from planes in the middle of the night and landed behind enemy lines. Weehawken lost 72 people during World War II.

The walls displayed an elaborate collection of archives, century-old news clippings, photos, and artifacts from World War I-era Weehawken that were researched and collected by the township’s historical commission. Many of the discoveries were made in the past year, including the long-forgotten names of several members of the military who were killed during WWI.

A concoction known as grog kept spirits high. Sergeant-At-Arms Adam Kerr oversaw the grog ceremony, which memorializes those who’ve served in the military.

“This tradition predates our republic, and traces back to at least the Revolutionary War,” Harris said. “It warmed our hearts before another cold day’s fight, yet, as enjoyable as it was, it’s also a ritual of remembrance. The grog ceremony, and the resulting potion, thus have something sacred to them.”

The “resulting potion” is a blend of beer, wine, and spirits that military officers had on hand during gatherings.

The 100th anniversary grog consisted of:

– Water, which  represented the lifeblood of those who serve

– Madeira wine, a favorite of George Washington, was poured in remembrance of the Founders.

– French red wine was poured in honor of Marquis De Lafayette, and all foreign U.S. allies.

– Bourbon was poured in honor of all Americans who served in the military.

– Irish whiskey was poured to honor Abraham Lincoln, and those who fought in the Civil War.

– Rum was poured to honor of those who served in the Spanish-American War.

– French white wine was poured in honor of the American Expeditionary Force, U.S. troops who served in World War I.

– Belgian beer was poured to honor the founders of Weehawken’s American Legion post, who fought along the western front in World War I.

– German beer was poured to honor those who fought against fascism, particularly in World War II.

– Soju was poured in honor of those who fought against Communist powers, in Vietnam and elsewhere.

– Brandy was poured to honor those who fought and died in the wake of the collapse of the Berlin Wall and the Soviet Union.

– A single Manhattan, stirred, but not shaken, was poured to honor servicemen, servicewomen, and Americans who lost their lives and loved ones on Sept. 11, 2001.

– Last, Chai tea was added to the mix, to honor those who died in the contemporary conflicts in the Middle East and in other areas of the world.