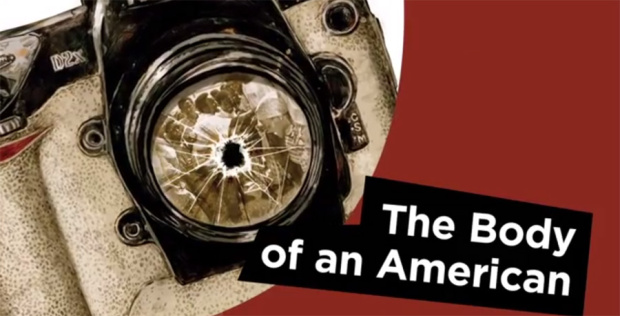 The Hudson Theatre Works schedule for 2019 – 2020 ranges from a docudrama concerning a controversial war photograph, one of Shakespeare’s most famous tragedies, a gala holiday show, and their annual 10 Minute Play Festival.

Opening on Oct. 17 and running through Nov. 3 is the New Jersey premiere of Dan O’Brien’s “Body of an American.”

“If you do this, I will own you forever,” words that haunted Canadian photojournalist Paul Watson. A single, stark photograph—of the body of an American soldier dragged from the wreckage of a Blackhawk helicopter through the streets of Mogadishu—reshaped the course of global events and won war photographer Paul Watson the Pulitzer Prize. Yet, he is haunted by that shutter click.

Playwright Dan O’Brien, struggling with ghosts of his own, reaches out to Watson, and the two forge a friendship as they reckon with the traumas that have shaped their lives. In this gripping true story, the two explore the ethical and personal consequences of the photograph, as well as the interplay between political upheaval and the experience of trauma in an age saturated by images and information.

Winner of the inaugural Edward Kennedy Prize, the Horton Foote Prize for Outstanding New American Play, and the PEN Award for Drama, “Body of an American”  is a bold, radically charged, theatrical and poetic true story that ranges from Afghanistan and Iraq to the Canadian High Arctic.

The Holiday show will be a reprise and a new annual tradition, Luigi Jannuzzi’s comedy, “And my True Love Gave To Me.”  Santa, Elves, French Hens, Geese, Cats, Princes, Magical birds, Frogs, Princesses and beautiful Swans!

Next up in February is Shakespeare’s “Hamlet,” the searing tragedy of a young person, tormented by his father’s death and confronting each of us with the mirror of our own mortality in an imperfect world.

The spring show in April/May is the world premiere of “Bunnies” by New Jersey playwright Joanne Hoersch. In 1973, at the New York Playboy Club, five Playboy Bunnies find themselves uplifted by the rise of feminism, haunted by the Good Bar murder, and conflicted about their jobs as sex symbols, while they bond in humor and compassion over the course of one evening.