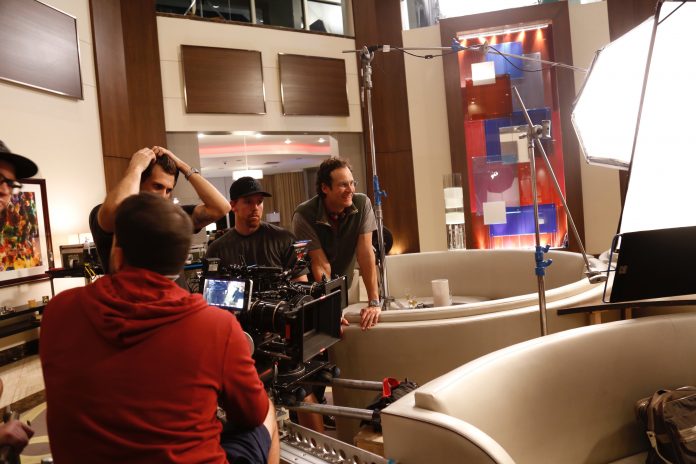 In 2007, when NBA referee Tim Donaghy got caught betting on games he worked, he said two men associated with the Gambino crime family – a bookie named Baba Battista and a drug dealer named Tommy Martino – threatened to kill his family if he didn’t give them gambling picks.

‘Inside Game’ is the untold true story of one of the biggest scandals in sports history. Shot on location in Hoboken, Rutherford, Fairlawn and Atlantic City, the movie was directed by Randall Batinkoff, written by Andy Callahan, and stars Scott Wolf (Party of Five), Will Sasso (The Three Stooges), Eric Mabius (Resident Evil), Lindsey Morgan (The 100), Michael O’Keefe (Caddyshack) and Arthur Nascarella (The Sopranos).

To help tell this story the producers, Paul Martino and Michael Pierce, forged a relationship with long time New Jersey producer Robert Capelli who has been devoted to bringing film production to Garden State for over 20 years. It’s important to Capelli to utilize local talent in front of and behind the camera.

In this film in particular while shooting in Rutherford, Capelli enlisted local kids to play the stars of the film as children. “It is important for me to try to bring New Jersey into any production that I am doing. The state is filled so many talented people and I feel that these people should be working as much as they can” states Capelli.

The producers predict that ‘Inside Game’ will be sending shock waves throughout the sports world, particularly the NBA and its fans. The film depicts the true story of what really happened in the biggest sports scandal since the notorious Black Sox game fixing during the 1919 World Series.

‘Inside Game’ is distributed by iDreamMachine and was produced by Raw Milk, 818 Productions and Michael Pierce Studios.