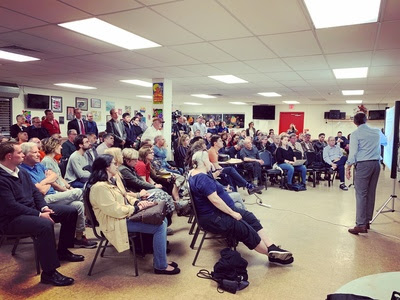 The Multi-Service Center was standing room only as roughly 100 residents attended a public meeting on the Hoboken Rail Yard Redevelopment Plan amendments.
×

The Multi-Service Center was standing room only as roughly 100 residents attended a public meeting on the Hoboken Rail Yard Redevelopment Plan amendments.

Nearly 100 residents came to a public meeting to air their concerns about the proposed amendment to the Hoboken Rail Yard Redevelopment Plan. It calls for three new high rise buildings in southern Hoboken, redesign of Warrington Plaza and the bus terminal, renovation of the ferry terminal, and the redesign of blocks near the train station.

Senior Vice President Brian Barry of LCOR, developer of the site, gave a presentation on the amendments. But the meeting quickly devolved into residents interrupting speakers and shouting questions over one another about parking, traffic, flood protections, and quality-of-life issues should more people come to southern Hoboken.

The proposed amendments would decrease the original size of the proposed development by about one million square feet.

The fourth site is labeled “future potential development” in an area that will include a 12-foot-tall flood wall as part of the Rebuild By Design plan, which aims to protect the city from flooding caused by storm surges up the Hudson River.

The amendments reduce the open space requirements from 4.5 acres to 1.45 acres.

The public meeting was held by the city at the Multi-Service Center after the council tabled a final vote on the amendments on Oct. 2.

Michelle Briehof of Maser Consulting, which conducted a traffic study on behalf of the developer last spring, tried to address concerns about traffic. She said the study indicated traffic would be manageable in the area but “there’s going to be more traffic. I’m not going to stand here and lie by saying there won’t be more traffic.”

Maser submitted the traffic study to the city in August. Since then, Hoboken’s consultant Kimley Horn has been reviewing the study and conducting their own.

“Wouldn’t it make more sense to look at the study and say ‘Hey, based on the traffic study, the most we can have is 10 stories instead of wasting time approving 20, and then going back and saying ‘You know what, just kidding it should be 10?’” one resident asked. They said that studies should be completed before plan amendments are approved.

To assuage concerns, Councilman Michael DeFusco who chairs the council’s subcommittee for southern development, said he won’t vote on the redevelopment plan until the traffic study is publicly available.

The flood wall at the fourth site labeled “Future potential redevelopment” was an issue for residents concerned with downtown flooding. Barry said despite the label, this area would be untouched because no one would want to live there, and the area is virtually “unbuildable.”

“This is a FEMA accredited resist barrier that requires certain clearances,” Barry said, noting that whoever maintains the wall would have to be able to get a vehicle to and from it in case it needed repairs. He said LCRO would not take on the “significant liability” in touching the wall and risking Hoboken flooding.

While Barry said the project is at least two years out, he said he needed to act now to have some assurances the project was still possible.

“I need to have some level of certainty that I have a development opportunity,” he said, adding now was the time to try and move the plan forward.

“We have NJ Transit’s engagement in leadership,” said Barry. “We have the state of New Jersey. We have the [Department of Environmental Protection] we’re working with closely. The city … we’re working with them closely, trying to move us forward. The PATH is fully engaged. Now is the time you have to realize this. This opportunity is not going to be there forever. One change in leadership … it’s over.”

The council was scheduled to hold a final vote on the plan amendments the following day, but Council President Jen Giattino announced at the meeting the ordinance would be tabled until November.

“We said from the start that 24 hours would not be enough time to receive resident feedback on this important legislation that will affect existing Hoboken residents, business owners, and municipal services,” said Councilwoman Tiffanie Fisher the following day. “I think last night’s meeting was extremely constructive, because so many people with differing opinions came together, and we all came out a little more knowledgeable.”

“The original Hoboken Yard Redevelopment Plan, passed by the City Council in 2014, will help revitalize downtown Hoboken and provide for responsible development that does not threaten the character of our city,” said Mayor Ravi Bhalla in a statement. “The City Council amendment to this plan proposes to allow the development to incorporate flood protection as part of our critical $230 million Rebuild by Design project, which will protect Hoboken for the long term from storm surge.”

This agreement, which details what the project will look like and what community givebacks there are, is then voted on by the council.