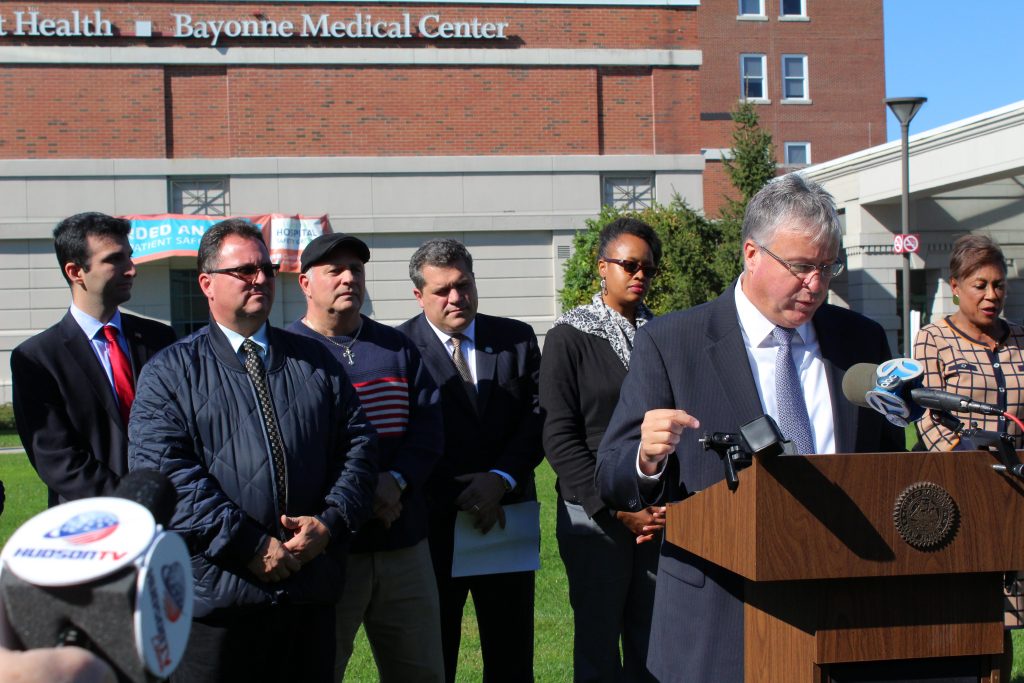 City officials have expedited creating a municipal hospital authority since CarePoint announced it was dissolving.
×

City officials have expedited creating a municipal hospital authority since CarePoint announced it was dissolving.

The entity that purchased the property on Nov. 11 from CarePoint Health is controlled by Avery Eisenreich, owner of a prominent chain of nursing homes in northern New Jersey called Alaris Health.

Singh said that Eisenreich’s company has no plans to oversee the hospital’s operations or be part of CarePoint’s ongoing negotiations in seeking a new hospital operator.

The new healthcare provider would have to lease land from Eisenreich’s LLC in order to maintain operations there.

Singh repeatedly told attendees that a closure of BMC is not being considered in the ongoing discussions CarePoint is having with potential hospital operators. CarePoint is still searching for an entity that will maintain services necessary to keep BMC a full-service facility.

Christ Hospital and HUMC were sold to RWJBarnabas Health. About 2,000 employees of those two hospitals received layoff notices. Singh said it’s safe to anticipate that almost all the CarePoint employees there will be re-hired by RWJBarnabas.

What about BMC affiliates?

Even if CarePoint finds a hospital operator to keep acute care going, as Singh seemingly indicated, BMC employees will receive layoff notices. While Singh said that RWJBarnabas will likely absorb all the former employees at Christ Hospital and HUMC, things are less certain for BMC because  its future operator hasn’t yet been chosen.

Several healthcare practitioners affiliated with CarePoint work outside the hospital. Due to the nature of insurance policies, it’s fiscally safer for independent doctors to join a larger healthcare network, such as CarePoint, in order to pool liability with other group members.

Bayonne’s McCabe Ambulance is also affiliated with CarePoint Health. The company, which had humble beginnings in the 1970s as a one-man, one-ambulance service based out of Mickey McCabe’s garage, now employs about 160 people and responds to roughly 25,000 calls each year.

Mickey McCabe said that, with the hospital authority in place, he remains optimistic.

“We have an ongoing 911 contract with Bayonne, and we’ve been in operation for 46 years,” McCabe said. “I’m glad to hear they voted for the authority. Though we haven’t been in conversations with anyone involved, I believe that if we keep doing what we’re doing, we can remain in service for at least another 46 years.”

Officials unanimously voted to establish the Bayonne Hospital Authority during a special city council meeting which several residents attended, though it lasted only a few minutes.

“A serious public emergency exists affecting the health, safety, and welfare of the people of the City resulting from the fact that Bayonne Medical Center may close, unless the city takes certain actions,” the resolution reads. “The sole purpose of this authority shall be to operate and maintain a hospital.”

Singh said that in searching for a replacement, CarePoint won’t settle for an entity that does not provide equivalent services. But Councilman Gary LaPelusa said that he and other officials plan to treat anything short of a contract as hearsay.

The board will be composed of one member appointed by Mayor Jimmy Davis. Two members will be appointed by the medical staff executive committee of Bayonne Medical Center, with terms commensurate with their membership on the hospital’s committee.

Six members of the public will be appointed by the mayor with yearlong terms. One will be selected for financial management experience, and another for expertise in nonprofit organizational management. Four of the six public members must be Bayonne residents.

The hospital authority will vote to select a chairman and vice-chairman from its membership.

Telethon to raise funds for Chuck Wepner statue in Bayonne