Thirty-two others displaced after Jan. 3 inferno 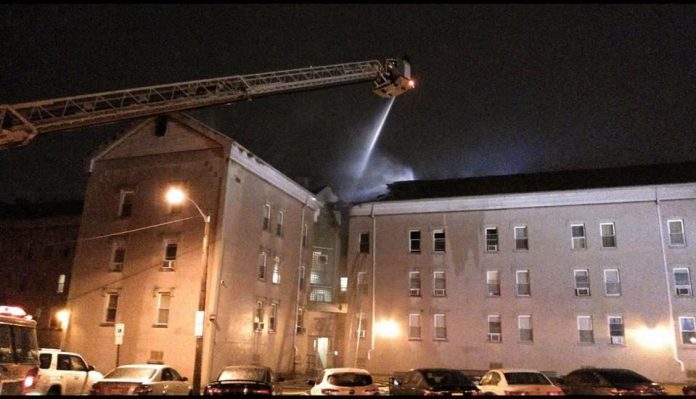 The two Bayonne residents who perished in the blaze on 3 Islandview Court have been identified, according to the Hudson County Prosecutor’s Office.

Windmill Alliance founder Balbina Macchio, 75, and her husband John, 65, were killed due to a two-alarm fire at their apartment complex.

The Windmill Alliance is an outreach program of Trinity Episcopal Church in Bergen Point. Formed in 1985, the first project created by the Alliance was in response to the lack of services available to the developmentally disabled adult population.

The term Windmill is an acronym that represents the mission statement of the program. Windmill stands for “Where Independence Nourishes Dignity Mid Inspired Lighthearted Labor.”

Balbina created the Windmill Center to give disabled adults a place to go after leaving the education system.

According to the Alliance, volunteers from all the churches and synagogues in the city participate in the program. The Alliance receives support from all the faith communities in Bayonne.

The Reverend Gregory G. Perez, Rector of Trinity Church, confirmed that the Macchios had died in the early morning fire.

In a statement, Perez mourned the loss of Balbina and John.

“Today, Windmill Alliance lost a dear friend and one of the original staff members who helped to bring the mission of this agency to fruition,” Perez told the Bayonne Community News. “Bali was a fearless and courageous voice for those who were often forgotten. She fought to give dignity to adults with developmental disabilities and to lift their voice for all to hear.”

“She loved each of our adult participants as her own,” Perez continued. “Bali has left such a beautiful legacy, that going forward, her name will be forever synonymous with the Windmill Alliance, Inc.  She and John will be greatly missed. “

The fire started in the Macchia’s unit

Joe Ryan, spokesperson for the city of Bayonne, confirmed there were two fatalities in the Islandview Court fire.

The Bayonne Fire Department responded to the blaze in Building 2 in the early hours of the morning on Jan. 3. According to the Hudson County Prosecutor’s Office, the fire started in Unit 236, the unit belonging to the Macchias.

According to the Bayonne Office of Emergency Management, members of the BFD were operating at the scene of the fire as of 1:52 a.m.

First responders to the scene at 3 Islandview Court noted flames coming from a window on the third floor of the building, according Fire Chief Keith Weaver. Arriving units found heavy fire and smoke coming from the third floor, with fire extending into the roof area.

Chief Weaver said firefighters used two hose lines inside the building to address the fire coming from the apartment.

The fire progressed to two alarms, and firefighters used exterior streams to extinguish the fire that extended into the attic space. Chief Weaver said the fire was placed under control at 4:31 a.m.

Bayonne Fire Department units remained on the scene throughout the morning to extinguish any hot spots or flareups in the building.

Upon removal from the burning apartment, the Macchios were transported to Bayonne Medical Center by Emergency Services. At BMC they succumbed to their injuries.

A third victim was also removed from the building, refusing further medical treatment. The third victim has yet to be identified.

Three buildings were affected by the fire. Of the three, the BFD determined that two were safe for residents to return to. Those buildings surrounded the burned apartment building.

Fifty-four apartments in the building complex were temporarily evacuated during the fire.

At press time, tenants who live in the building directly affected by the blaze were not allowed to return.

A total of 32 people from 18 apartments are now displaced until repairs can be completed. They are being assisted by the Bayonne Office of Emergency Management and the Red Cross.

Investigators are still searching the scene to identify what may have started the fire. The Regional Arson Task Force is actively investigating this incident with assistance from the Bayonne Fire Department.

A preliminary investigation determined that the origin of the fire was in the kitchen of Unit 236. The cause of the fire remains unknown.

The Macchio family has asked that donations be made on behalf of the deceased in lieu of flowers. According to a statement on Facebook, Mayor Jimmy Davis said that the family has requested any and all donations be made to benefit their fellow IslandView residents that have been displaced by this tragic fire. Donations for the people that have been displaced can be made to the BEOF at their office or online at beof.org.