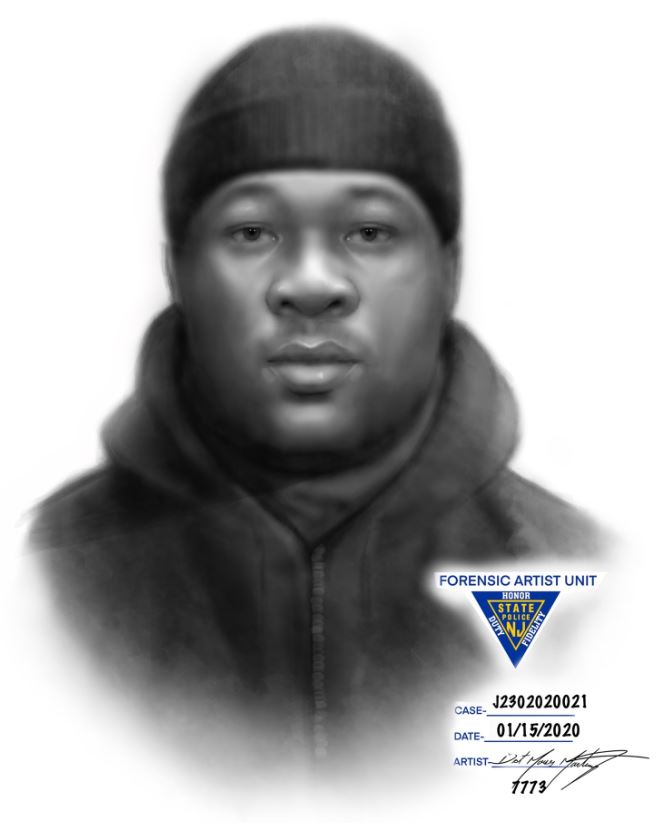 A composite sketch of the suspect of the alleged sexual assault provided by the Hudson County Prosecutor's Office.
×

A composite sketch of the suspect of the alleged sexual assault provided by the Hudson County Prosecutor's Office.

Investigators are seeking the public’s assistance in the search for any leads regarding the suspect’s identity. Few details are known about the suspect except for a sketch developed by investigators.

Officials have released a composite sketch of the suspect to help with identification. The sketch was developed by the New Jersey State Police Department Forensic Photography & Composite Artist Unit.

Investigators have identified the alleged suspect as a male. The man is described as a tall man with a large build, according to authorities.

From the sketch, the man appears to be an African-American male. The suspect is illustrated wearing what appears to be a turtleneck and a hooded sweater as well as a knit cap.

Despite the composite sketch and brief descriptors, much about the suspect remains a mystery. Authorities are seeking the public’s assistance in gathering any information regarding the alleged suspect.

Back in June of 2019, Secaucus Police Department and HCPO SVU worked together to catch a Union City man who was charged with sexual assault of 6-year old girl. The suspect was apprehended on June 14 at the Prosecutor’s Office in Jersey City after allegedly sexually assaulting the 6-year old girl while babysitting the child on multiple occasions.

According to the National Sexual Violence Resource Center, (NSVRC) sexual assaults are unfortunately common in the United States.

One in five women and one in 71 men will be sexually assaulted at some point in their lives, according to the NSVR. The center said that sexual assault is the most under-reported crime, with 63 percent of sexual assaults not reported to police.

The prevalence of false reporting is low according to the NSVRC. Anywhere from 2 percent up to 10 percent of reports were found to be falsely filed.

Investigators are currently urging anyone with information regarding the suspect in the alleged sexual assault in Secaucus to contact the Hudson County Prosecutor’s Office Special Victims Unit at 201-915-1234. Alternatively, leave an anonymous tip at: http://www.hudsoncountyprosecutorsofficenj.org/homicide-tip/.