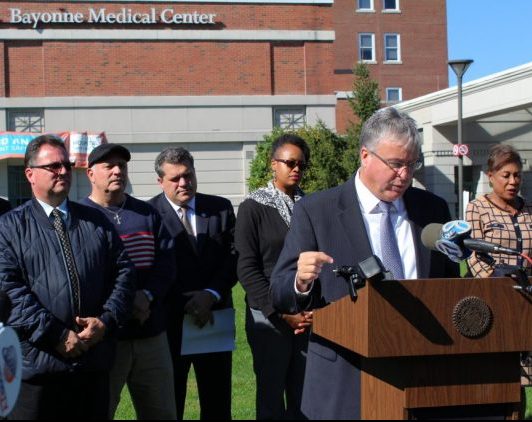 Hudson County’s state legislators have asked the governor to help put an end to the ongoing hospital crisis in Hudson County.

In a letter to Gov. Phil Murphy, all nine elected officials asked the state to investigate Alaris Health and to appoint financial monitors for Christ Hospital in Jersey City and Bayonne Medical Center (BMC).

At the center of the crisis is CarePoint Health, which has dissolved and has been liquidating its assets. That includes selling BMC, Christ Hospital, and Hoboken University Medical Center (HUMC).

In October of 2019, CarePoint and RWJBarnabas Health signed a letter of intent, whereby Christ Hospital and HUMC will become part of RWJBarnabas.

Negotiations between RWJBH and CarePoint broke down, resulting in Jersey City Mayor Steve Fulop petitioning Gov. Murphy for help on Feb. 3. As a result, a financial monitor was appointed by the NJ Department of Health (DOH) to oversee Christ Hospital.

In a Feb. 10 letter, Hudson County’s legislators presented Murphy with a list of actions that the governor could take that would help end the hospital crisis.

On Feb. 11, negotiations between CarePoint Health and RWJBarnabas regarding Christ Hospital in Jersey City and Hoboken University Medical Center resumed, according to a spokesperson for CarePoint.

The healthcare giants met at city hall in Jersey City in hopes that progress would continue in the negotiations involving two CarePoint hospitals in Hudson County. CarePoint expressed its appreciation for the intervention by local officials to restart discussions with RWJBarnabas.

“CarePoint Health appreciates the efforts by the mayors and state lawmakers to call all parties together to seek a solution,” a spokesperson for CarePoint Health told the Bayonne Community News.

According to CarePoint, Bayonne Mayor James Davis, Hoboken Mayor Ravi Bhalla, and Jersey City Mayor Steven Fulop were among some of the Hudson County elected officials present at the meeting.

Mayor Davis told the Bayonne Community News on Feb. 13 that his efforts of recent months have been focused on saving Bayonne Medical Center.

“Now that the deal for Christ Hospital and Hoboken University Hospital has fallen apart, all of the municipalities must unite for a countywide solution to save all three hospitals,” Mayor Davis said.

According to Davis, Hudson County cannot afford to lose any of the hospitals.

“All of us must stand together,” Davis said. “We must remember that there is strength in unity.”

Just a day after the letter to Murphy, the involved parties were back at the bargaining table. CarePoint seemed optimistic at the approach taken by lawmakers to put the negotiations back on track.

“We made a fair and reasonable proposal today to RWJBH on the Christ Hospital property,” a spokesperson for CarePoint said.

Despite the fast pace and time-sensitive nature of the hospital talks, it is not yet clear when the next step will be taken in the negotiations.

According to CarePoint, RWJBH informed all parties that it needs some time to consider the proposal.

CarePoint said it looks forward to hearing back from RWJBH while awaiting a response regarding the offer.

“We will continue to negotiate with good faith,” a spokesperson for CarePoint said. “Our priorities remain our patients, employees, physicians, and community.”

No further meetings have been planned because CarePoint is still waiting for RWJBarnabas’s response, according to a spokesperson for CarePoint.

The meeting in Jersey City and the letter to Gov. Murphy are part of what seems to be a new coordinated effort by Hudson County legislators to put an end to the hospital crisis.

In the letter, the legislators state that Christ Hospital and BMC are weeks away from bankruptcy and that immediate action is required to avert the abrupt loss of healthcare access in Hudson County.

According to officials, the DOH has had weekly calls with CarePoint Health to monitor the hospitals’ financial viability.

“It now appears that Christ Hospital is on the verge of bankruptcy and petitioning for closure and that Bayonne Medical Center is only a few weeks behind,” the letter reads.

It goes on: “As the fastest growing county in the state and one of the most densely populated in the country, Hudson County remains in need of multiple acute care facilities to assure the health and safety of our residents,” the legislators wrote. “Hudson County has added an estimated 60,000 new residents and grown 9 percent in the past ten years.”

A six point plan to save the hospitals

The legislators asked the Murphy administration to take six actions.

Legislators called for the appointment of receivers for Christ Hospital and BMC,who would act as operators for the hospitals and end CarePoint’s search for operators.

The legislators asked Murphy to order the DOH to prohibit any hospital from closing without a certificate of need, a document that establishes the need for a new hospital in an area.

The legislators called for an investigation into the operations of Alaris Health and Clover Health, a Medicare Advantage insurer owned by Vivek Garipalli.

The letter states that Alaris is owned by the same owners of CarePoint. This adds another layer of confusion to the ongoing litigation between CarePoint and Alaris, prompted by CarePoint’s efforts to liquidate its hospital assets.

The owners of CarePoint are Garipalli, James Lawler, and Jeffrey Mandler.

The legislators point to the NJ State Commission on Investigations (NJSCI) report that initially uncovered an alleged embezzlement scheme involving CarePoint’s owners as part of their reason for an investigation.

“In March of 2019, the letter references the NJ State Commission on Investigations report that at least $158 million was siphoned from the CarePoint owners into shell companies operated by those very same owners,” the letter stated.

The report was based on an extensive audit of the books, records, financial disclosures, and tax returns of the CarePoint owners. While it condemned their actions, it did not recommend a criminal investigation. The legislators now believe an investigation is needed.

“Considering these and other allegations about irregularities that have since surfaced, we request that the Department of Health, Department of Banking and Insurance, and Attorney General investigate the operations of Clover Health and Alaris Health, both of which companies are owned and operated by CarePoint owners, to determine if similar actions that threaten to compromise patient care or are otherwise violative of regulations are underway,” the legislators wrote to Gov. Murphy.

The letter states that “the near bankruptcy of the CarePoint hospitals is directly related to the decision by CarePoint’s owners to withdraw unreasonably large sums from their operations for personal profit at the detriment to services and the health care available to Hudson County residents.”

The legislators also called out Eisenreich, owner of Alaris, for his alleged “questionable practices.”

The legislators stated that Eisenreich allegedly knowingly and willingly acquiesced to the questionable practices involving the management companies.

Last, the letter called for Murphy to support proposed legislation that would clarify eminent domain powers in scenarios similar to the current hospital crisis.

“Support our proposed legislation to clarify the eminent domain powers of public entities concerning real properties that contain acute care hospitals when such hospitals are at imminent risk of closure or have filed for relief under federal bankruptcy laws and streamline the condemnation process,” the letter reads. “Only swift, decisive leadership can avert placing hundreds of thousands of our constituents and the public health in a state of unacceptable risk.”

Bayonne property taxes due May 10