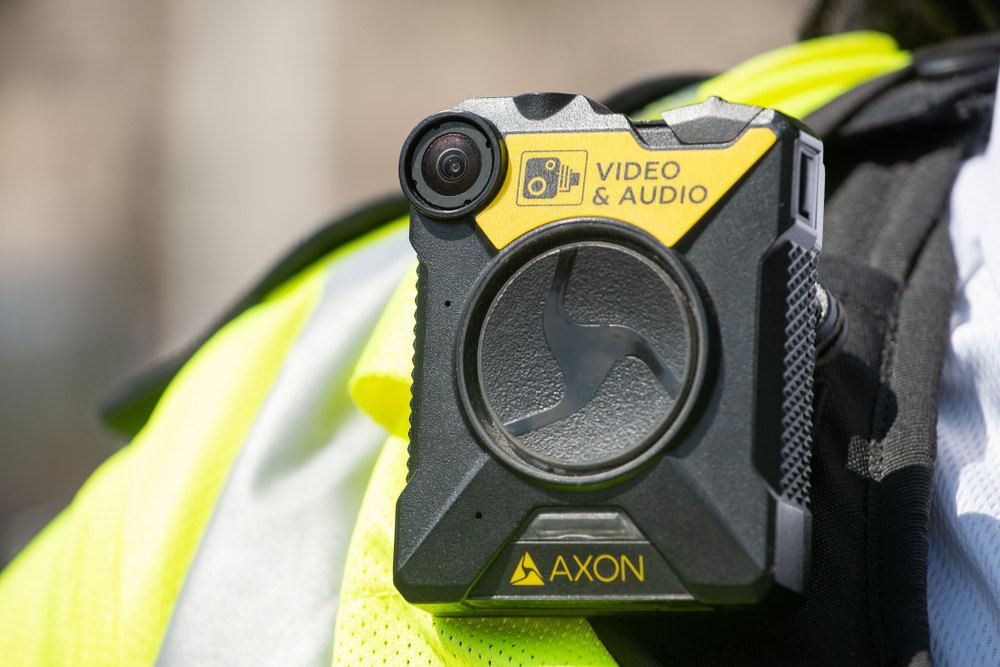 An Axon body camera in use by a police officer in London. Photo by John Gomez for Shutterstock.com.
×

An Axon body camera in use by a police officer in London. Photo by John Gomez for Shutterstock.com.

Soon, new technology will be integrated into the policing of North Bergen. The Police Department has begun testing a body camera program on police officers from the traffic bureau.

The Board of Commissioners adopted an ordinance bonding $3,780,000 for a wide range of improvements to the town, including the body camera program, at the Feb. 12 meeting.

A separate part of the ordinance bonds for the acquisition of new police cars.

According to Town Manager Chris Pianese, the town is also going to upgrade the police fleet with four unmarked vehicles. Pianese said the town usually adds four new vehicles to the fleet each year. However, this year the town is opting for 4×4 trucks instead of the typical sedans.

Who watches the watchmen?

Deputy Chief of Police Peter Fasilis told the Hudson Reporter that early testing of the program started at the end of February.

Recently, Chief of Police Robert J. Dowd announced his retirement and will be succeeded by Fasilis, who will take the oath of office on May 1.

According to Fasilis, the NBPD is currently evaluating the program, testing the use of body cameras on its police officers from the traffic bureau.

Fasilis said that the trial run will begin with a very small group of officers.

The plan calls for approximately six officers from the traffic bureau to test the newly introduced technology. According to Fasilis, these officers best suited to test the program because they have the most interaction with the public on a daily basis.

Fasilis said he expects a full roll out of the body camera program by the mid-year, because a lot of components go into starting the program.

The NBPD is still reviewing when it would be appropriate to use the body cameras.

There is also the matter of getting the technology set up. The program will be cloud-based, meaning that the footage will not be stored locally. Instead the data will be uploaded to evidence.com for secure storage.

Fasilis said the program launch starts around June or July.

Fasilis told the Hudson Reporter that the body cam program is a continuation of ongoing transparency efforts and one of the ways that the North Bergen police are advancing technology.

According to Fasilis, the NBPD will now be at the forefront of technology-driven enforcement.

This falls in line with the Obama administration’s Task Force on 21st Century Policing’s final report. In 2016, Dowd was invited to the White House by the Obama Administration to participate in discussions on the matter.

“The use of technology can improve policing practices and build community trust and legitimacy, but its implementation must be built on a defined policy framework with its purposes and goals clearly delineated,” the report stated. “Implementing new technologies can give police departments an opportunity to fully engage and educate communities in a dialogue about their expectations for transparency, accountability, and privacy.”

Fasilis said the body cam program is a continuation and furtherance of that pillar, serving to make North Bergen police more transparent as well.

“It is something that has to be done,” Fasilis said.

According to Fasilis, the program is a big commitment for the department with a number of underlying factors like video storage.

The initial investment was $140,000 for a plan with Axon, a high-tech police equipment company. The cameras will be purchased from Axon, which also sells “smart weapons,” such as high-tech tasers, and advanced police online storage software.

Fasilis said the five-year plan will distribute the cost evenly among the various expenses that come with the creation of the program.

The money bonded by the ordinance would be allotted for the warranty, cloud storage, and software, among other integral parts of the body camera program.

The cloud storage of all police body camera footage will be uploaded to evidence.com.

Fasilis said that cloud storage is cost effective because there’s a lesser IT component than there would be if the footage was stored locally.

This also prevents possible issues or interference at the local level.

According to Fasilis, the NBPD is learning more every day from body cameras and similar types of technology. The program rollover will also update the technology and other police tech as it becomes outdated.

“The body camera program will be good for everyone,” Fasilis said.

Florida braces for Hurricane Irma. Is Jose on the way?