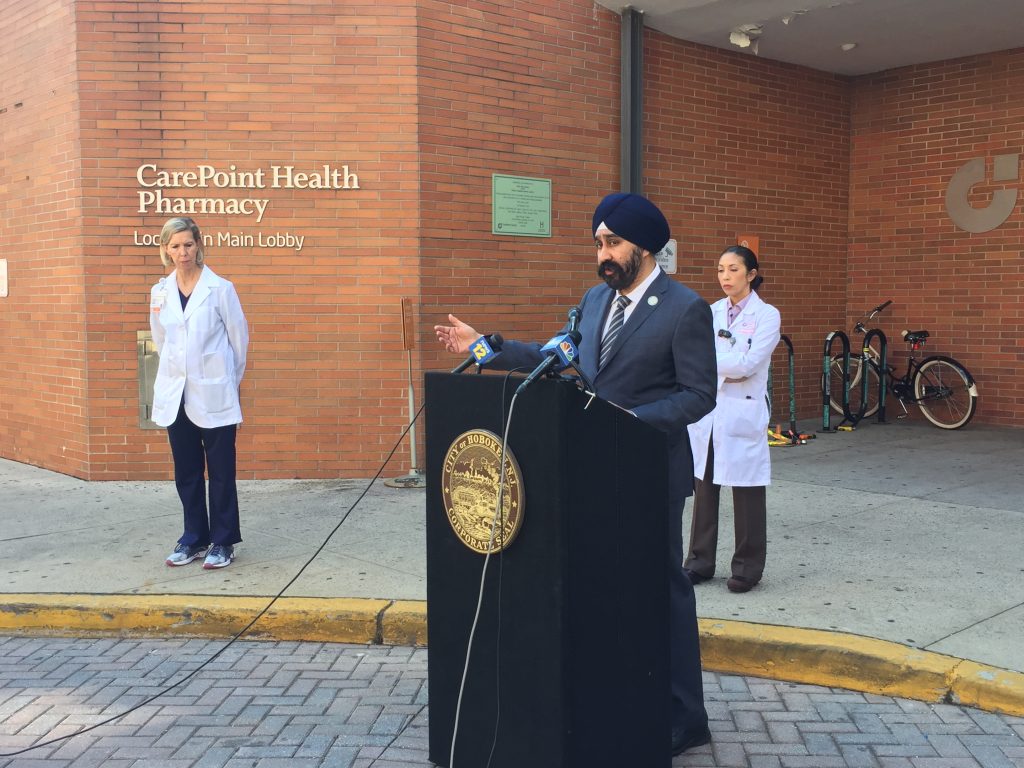 Hoboken University Medical Center will run out of personal protective equipment in six days according to an announcement made by Mayor Ravi Bhalla and hospital staff on March. 26.
× 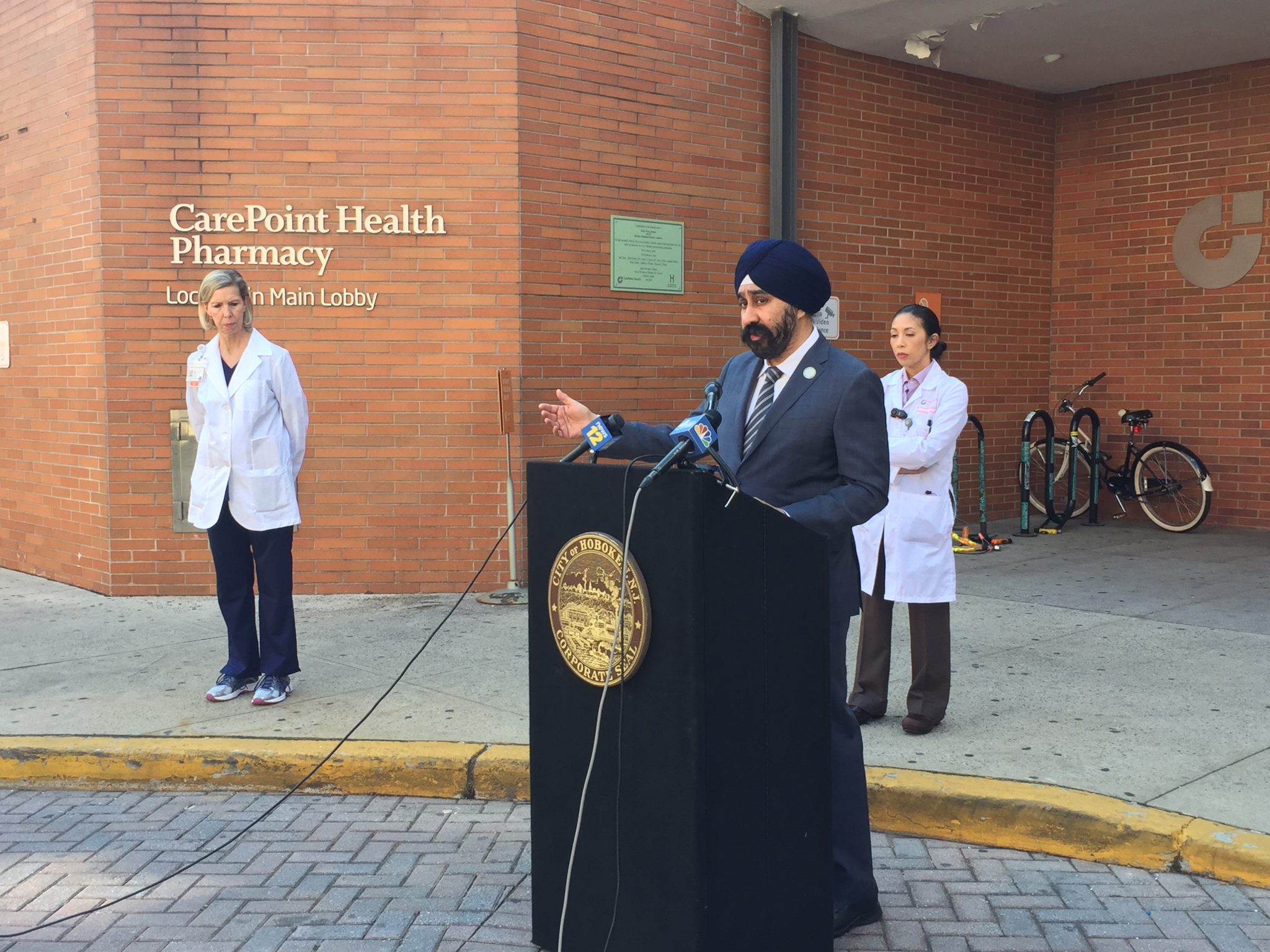 Hoboken University Medical Center will run out of personal protective equipment in six days according to an announcement made by Mayor Ravi Bhalla and hospital staff on March. 26.

“Our hospital needs additional resources without delay, before it’s too late,” pleaded Mayor Ravi Bhalla at a press conference outside of Hoboken University Medical Center on March 26. The mayor urged the federal government to help secure personal protective equipment and ventilators for the acute care facility.

According to Bhalla and Chief Hospital Executive Ann Logan, in six days time the hospital will run out of personal protective equipment including masks, gloves, gowns, and face shields.

“I’m here because our hospital, the Hoboken University Medical Center, has sounded the alarm,” said Bhalla. “I will not mince words – hospital leadership has informed me that in six days they will run out of critical, life-saving medical supplies and equipment. In six days, we will not have the resources we need to save lives. In six days, the hospital’s personal protective equipment including N95 masks, gowns, gloves, and more, will be used and gone.”

The hospital is also near capacity of ventilators for critical patients and is requesting another 13 in order to meet the surge of patients the hospital anticipates it will get in the next two to three weeks due to the COVID-19 pandemic.

Approximately one-third of the hospital’s patients are either being tested for COVID-19 or have tested positive.

Overnight, Hoboken’s positive cases increased by 16 to a total of 56 infected residents as of March 26, most of whom are recovering and are under quarantine at home, according to Director of Health and Human Services Leo Pelligrini.

As a whole, New Jersey and New York are at the epicenter of the deadly outbreak with over 28,000 positive cases as of March 26.

“Shockingly, New Jersey as a whole has more cases than California,” said Bhalla.

He said now was the time for state and federal leaders to allocate resources available to fight the spread of COVID-19 to HUMC.

“This is my message to those at the Federal Department of Health of Human Services making the decisions: Hoboken desperately needs your help, and we need it now…lives are literally on the line,” said Bhalla.

“In emergencies, we all come together as a nation, that’s what we do,” said Council President Jen Giattino. “We’re asking for your help today, not when it’s too late.”

According to Dr. Melissa Enriquez, an attending physician in the hospital’s emergency department, medical staff members are already reusing personal protective equipment according to guidelines from the Center for Disease Control.

She said testing kits are also coming at an unpredictable rate in “drips and drabs,” noting that while they had an order for over 170 kits, the supplier was only able to give them 20 because of shortages.

Tests are therefore only used on patients that have to be admitted to the hospital and those who are healthy enough to self-quarantine at home go without.

She said the hospital has a “severe need “ for ventilators, adding the decision who gets a ventilator and who dies is “unthinkable and unacceptable.”

“Cities like Hoboken and other Hudson County municipalities are hitting a breaking point, and we need to do everything possible to ensure doctors aren’t forced to pick and choose who lives based on equipment shortages,” said Bhalla.

In order to have enough PPE for the anticipated surge of patients due to COVID-19, CarePoint, which also operates Bayonne Medical Center and Christ Hospital, has indicated it will need approximately 10,000 surgical masks, 5,000 face shields, 2,800 N95 masks, and 5,000 gowns.

More and more patients are coming to HUMC to get tested and treated because of COVID-19, and medical professionals predict it’s only going to get worse with the surge.

To meet the surge the hospital has already developed plans to expand the Emergency Department into the parking garage adjacent to the hospital to manage the influx of new patients coming in.

According to Logan the hospital has 19 negative pressure rooms but they have been able to expand into other departments such as the ICU into private rooms to isolate patients.

According to Logan, 30 people are in isolation at HUMC and either have COVID-19 or are awaiting test results which are typically available between three and seven days.

“But added space will not matter unless added supplies come and come quickly,” said Bhalla.

Logan said currently the hospital has five staff members who are infected and a “couple who have been exposed who are also out and self-monitoring at home.”

She said the hospital is also in need of nurses and physicians in preparation for the surge.

Should a pool go in the Multi Service Center?